When talking about one of the most iconic traditions in college football, the "Sooner Schooner" at the University of Oklahoma is up there as one of the best. It's been around for over 55 years for crying out loud, but there was one day when the Sooner Schooner appeared to have taken its last lap. 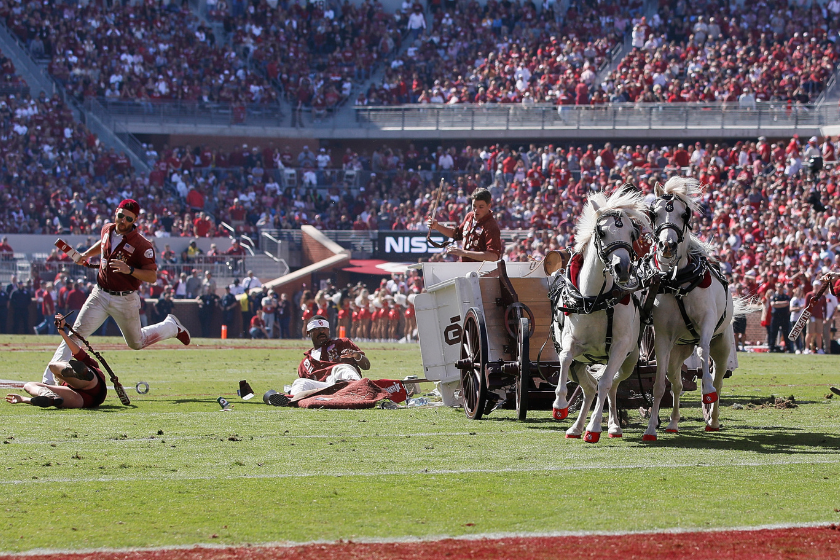 In today's college football landscape, Oklahoma isn't on the same plane as Ohio State, USC, UCLA, or even TCU, but back in 2019, the Sooners were the talk to the town... just not in the way they had hoped. When making ESPN's Top 10 plays, you want to make sure you're at the top of the rankings, not towards the bottom.

In the second quarter, with the Oklahoma Sooners dominating the West Virginia Mountaineers in Norman, Okla., the Sooner Schooner left the tunnel and took a little stroll onto the Oklahoma Memorial Stadium field. This was done thousands upon thousands of times over the years, but the driver took a sharp turn and the wagon went flying.

The crash threw two passengers to the ground and damaged the wagon. Luckily, nobody was seriously injured during the touchdown celebration in the first half. The ponies were reported fine, too.

"Overall, they're going to be okay."

Thankfully everyone walked away after the Sooner Schooner tipped over. pic.twitter.com/J1dwTP9xS8

This isn't the first time a crashed has occurred, either. Oklahoma's Sooner Schooner -- the official mascot of the university -- also tipped over in a 1993 NCAA football game against Colorado.

In 2019, with two OU football home games remaining against Iowa State and TCU, school officials opted to put the schooner out of commission for the rest of the 2019 regular season, according to the OU Daily.

"We will repair the damaged Schooner and its future use will be for static display. It is possible that it will be back at a game this season, but it will not run. We also are in the process of having a new Schooner constructed. There is no timetable yet for when it will be ready. I would anticipate having it in time for the spring game."

Not that it's their fault, but the real question is whether or not the RUF/NEKS were driving without a license. After all, it's not every day that the Sooner Schooner flips. In all seriousness, it appeared as if there was an issue with weight distribution, especially at the rear of the wagon. Boomer and Sooner, the two white ponies who pull the Sooner Schooner, were thankfully unharmed, but that didn't stop everyone's favorite animal rights group from getting involved.

Naturally, when an incident like this happens, PETA likes to chime in, and that's exactly what took place when they told OU Athletics to "KEEP HORSES OFF THE FIELD."

"Oklahoma's horse-drawn #SoonerSchooner wagon tipped over, launching spirit squad members onto the field," the organization posted in a tweet. "Exploiting animals for sports is unnecessary & incredibly dangerous for animals AND humans."

Look, accidents happen. OU likely has a lot of expert horse handlers. It's unfortunate the Sooner Schooner crashed, but no one was hurt and we can all look forward to its return this spring.

This article was originally published October 23, 2019.

MORE: The 15 Most Electric Entrances in College Football