Ex-WVU Star Jailed for Molesting Girl, 12, Claiming It Was Her Idea 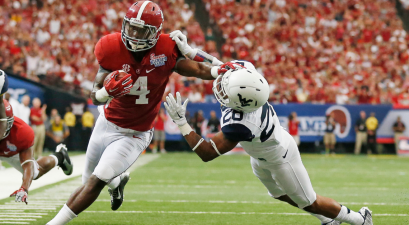 Alabama, WVU Set Home-and-Home Series Against Each Other

It’s no secret that athletes at the highest level have a sense of entitlement being catered to their entire lives, but some of them have jaw-dropping backstories that brings them back to Earth. In a time where women’s voices are more powerful than ever, it’s difficult to hear how a young girl was blamed by an elite football player for something that seems so far out of her control.

That’s exactly what happened when former West Virginia Mountaineers running back Justin Crawford was arrested for an incident that occurred at his home on Saturday, October 13. The Big 12 Conference’s Newcomer of the Year in 2016 was charged with aggravated child molestation, incest, sodomy and enticing a minor for indecent purpose for seducing a 12-year-old girl.

According to the Columbus Ledger-Enquirer, Chakeya Crawford, who is Crawford’s wife, came downstairs on Saturday morning around 5 a.m. and saw her husband standing over the girl with his genitals exposed. She contests that her husband ran because she scared him, and told her that nothing happened. Because it was so late, she went to bed deciding to handle the matter later.

?I did not see anyone having sex, or I would have called police right away,” Chakeya Crawford said.

At a preliminary hearing, Columbus Police Detective Mark Scruggs testified that when the girl was returned to her mother later on, she stated that Crawford came into the living room while she was sleeping and had her perform oral sex before the two had intercourse.

After an initial denial, Crawford later confessed the two did in fact have intercourse, though he claims that it was the girl’s idea to do so, according to police.

Crawford is being held in Muscogee County Jail without bond awaiting trial for the felony charges.

In two seasons, Crawford racked up back-to-back 1,000 rushing seasons and scored 12 total touchdowns for the Mountaineers and earned second-team All-Big 12 honors in 2017.

During the 2018 preseason, he signed as an undrafted free agent in the NFL with the Atlanta Falcons before being released in September, and then signed to play with the Atlanta Legends of the Alliance of American Football, who waived him, too.

This story is bone-chilling for a number of reasons, and it should be the last time we hear about Justin Crawford until he is sentenced to prison.

UPDATE: TMZ reported that Justin Crawford was sentenced to 12 years in prison after pleading guilty to child molestation and sodomy. The former football star entered a plea deal at Muscogee County Court in Georgia, which includes 20 years of probation that begins with the start of his prison sentence and is set to end in 2039.

This story was originally published October 17, 2018. It was updated after Crawford was sentenced to prison the following year.