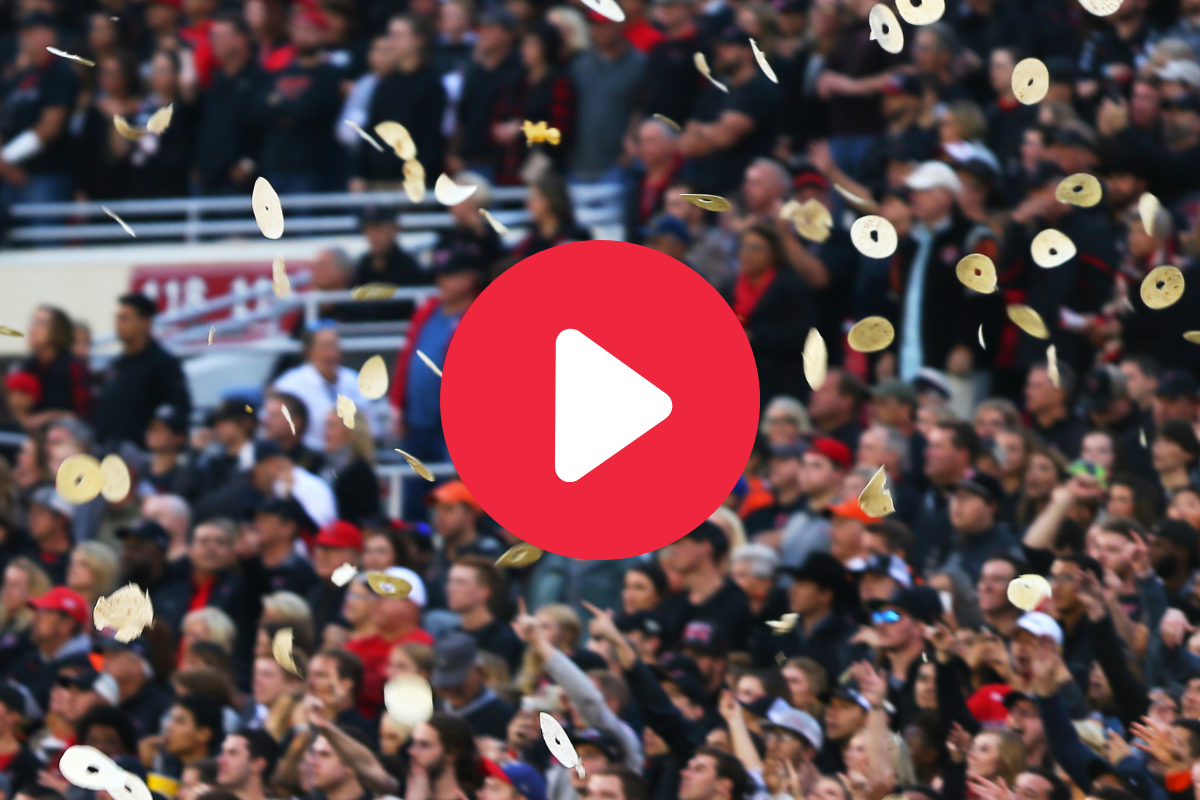 Grocery stores in Lubbock, Texas, know to stock up on tortillas before football season. Lines of college kids will clean the shelves every Saturday and warm up their throwing arms while checking out.

You see, come the fall, Texas Tech football games become the largest tortilla-per-capita area in the entire country. We’re talking bigger than the neighborhood Taco Bell at 3 A.M. It’s all to take part in the school’s most sacred tradition.

RELATED: The Mahomes vs. Mayfield Showdown That Rewrote the NCAA Record Book

Back in 1989, the concession stands at Jones AT&T Stadium offered 44 oz. soda drinks. That’s a big enough cup for a small child to fit in, and a big enough lid to frisbee onto the field. That’s exactly what students did.

Thousands of lids rained onto the field in spectacular fashion. By the next game, the lids were mysteriously absent. Students weren’t going to let the fun stop after experiencing the euphoria that is throwing a lid. No, they needed another plan. They thought of another round, cheap device that could be a worthy substitute.

The tortilla tossing tradition was born the next week.

Ever since, Texas Tech fans have been smuggling tortillas into games to throw after the opening kickoff. They even figured out that cutting a hole in the middle make them fly farther. Seeing the Lubbock sky filled with flying tortillas is a special sight. It’s like watching the grand finale of a fireworks show.

The Penalty For Throwing Tortillas

The tradition peaked throughout the ’90s and into the 2000s. By 2001, a rule was instituted to penalize the Red Raider football team 15 yards if any tortillas were thrown. It was reduced to five yards the next year. As if that would stop fans from the cherished tradition.

Technically, Jones AT&T Stadium prohibits outside food, going as far as searching boots and purses for tortillas, but TTU fans have found creative ways to keep the tradition alive. It even makes its way to the hardwood and other sporting events.

A Texas Tech University student threw a tortilla onto the court and stopped the game. pic.twitter.com/REkMNaVgdU

One fan threw a tortilla onto the floor of the 2019 NCAA National Championship game when the Red Raiders faced Virginia. The game was stopped and security confiscated tortillas galore from the student section.

I love this tradition because there’s no rhyme or reason to it. They do it because somebody decided throwing stuff on the field was fun 30 years ago. You can’t ignore Texas Tech throwing tortillas when talking college football history.