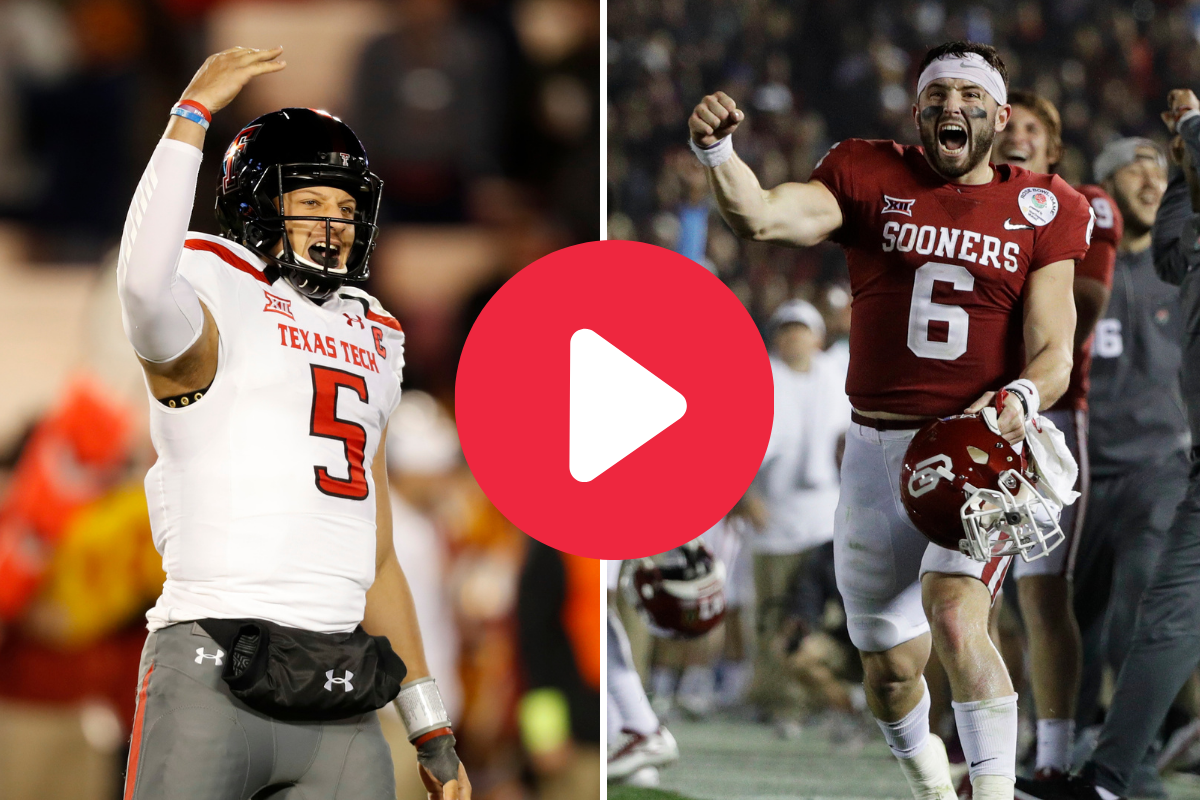 Tons of games in college football history are stellar, record-breaking contests get lost in time, unless of course you happen to be a fan of the winning team. With so many one-sided performances that stand out, there are even fewer instances where two teams, and two iconic players, clash to give us one of the greatest football games ever.

On October 22, 2016, the No. 16 Oklahoma Sooners and Texas Tech Red Raiders met in Lubbock, Texas, for a Big 12 night game on national television. Oklahoma, led by quarterback Baker Mayfield, entered as a 16-point favorite against junior quarterback Patrick Mahomes and Texas Tech. What transpired was a shootout that broke the Internet and set multiple NCAA records in the process.

Oklahoma outlasted Texas Tech to win the game 66-59, and both quarterbacks played games that were jaw-droppingly good. Classic college football fans, and defensive coaches everywhere, probably hate the idea of two teams combining to score 125 points in a game, but this game had it all.

Two first half Texas Tech turnovers, and one Oklahoma drive that ended after a failed fourth-down conversion, saw the halftime score climb to 30-24 in favor of the Sooners. In the second half, you couldn’t have scripted a better offensive football game. Aside from Texas Tech’s three-and-out to start the half, and Oklahoma’s kneel down as time expired, every single second half possession ended with a touchdown.

RELATED: Baker Mayfield?s Net Worth Grows No Matter How He Plays

Texas Tech quarterback Patrick Mahomes II, now taking the NFL by storm with the Kansas City Chiefs, completed 52-of-88 passes for 734 yards and five touchdowns passes, and tacked on 12 carries for 85 rushing yards and two more TDs to finish with a single-game FBS record 819 yards of total offense.

Oklahoma quarterback Baker Mayfield, who is becoming the pride of the Cleveland Browns, was 27-of-36 for 545 yards and seven touchdown passes and zero interceptions. Not to be outdone, wide receiver Dede Westbrook did his part by catching nine of those passes for 202 yards and two touchdowns.

Oklahoma running back Joe Mixon also became one of only seven players in NCAA history to rush for over 200 yards (263) and have 100 or more yards receiving (114) in one game. He also scored five total TDs adding to the incredible record-breaking game on Saturday night at Jones AT&T Stadium.

Most Total Yards of Offense in One Game: 819

Most Passing Yards in One Game: 734 (tied the NCAA record)

Most Pass Attempts in One Game: 88 (School record, 1 shy of NCAA record)

Most Total Yards by Opposing Players: 1,383

Most Yards Gained by a Losing Team: 854

While the game didn’t surpass the NCAA record book for combined points in one game, set later that year in fact when Pitt beat Syracuse 76-61, it featured two of college football’s elite passers setting the standard for what it means to play a great football game.

While head coaches Bob Stoops and Kliff Kingsbury had more defensive film to dissect on Sunday morning, I’m sure this is one matchup they’ll never forget coaching.

Oklahoma versus TTU will live on as a preview of what figures to be two interesting, and potentially legendary, careers in the NFL for Mayfield and Mahomes.

This article was originally published October 22, 2018.