He may not be a seasoned veteran in the NFL, but Cleveland Browns quarterback Baker Mayfield has collected a pretty nice net worth so far in his young career. Despite being just 25, he's already played three seasons in the NFL with the Cleveland Browns and tied the knot with someone.

In three seasons as a professional American football player, along with quite a few endorsement deals, Mayfield is making loads of money even if he isn't producing on the field as well as some fantasy football owners would like.

Born in Austin, Texas, Baker Reagan Mayfield was the second son of James and Gina Mayfield. He went on to start at quarterback at Lake Travis High School, including guiding his team to a 16-0 record and fifth-straight state championship as a junior.

He led the Cavaliers to a 25-2 record as their starter and was ranked as a three-star recruit by Rivals before eventually decided to walk on or the Texas Tech Red Raiders.

In his freshman season, Mayfield became the starter and threw for 2,315 yards, 12 touchdowns and nine interceptions on his way to being names Big 12 Freshman of the Year. He decided to leave the program after losing the starting job and a miscommunication about his scholarship with head coach Kliff Kingsbury.

He transferred to the University of Oklahoma Sooners and after sitting out the 2014 season, won the starting quarterback job for the 2015 season. He was an immediate success as a First Team All-American walk-on for the Sooners, passing for 3,700 yards and 36 touchdowns, finishing fourth in Heisman voting and bringing his football team to the College Football Playoff.

He followed that up with two even better seasons in 2016 and 2017. His 2017 was one of the best passing seasons for a college football quarterback ever with 4,627 passing yards, 48 total touchdowns, and just six interceptions.

Mayfield finally won the 2017 Heisman Trophy after finishing in the top four the previous two seasons. He also won the Maxwell Award and Walter Camp Award as college football's player of the year, the Davey O'Brien Award for most outstanding quarterback and returned to the College Football Playoff.

ICYMI: This was the moment Baker Mayfield found out he was the No. 1 pick in the NFL Draft. pic.twitter.com/gGdtyYBs7f

Even though there were questions about his character and measurements, the Cleveland Browns decided to pick Mayfield with the first overall pick of the 2018 NFL Draft. He signed his four-year, $32.68 million rookie deal, which included a $21 million signing bonus.

As a rookie, he started 13 games after sitting behind Tyrod Taylor to open the season. With 3,725 passing yards and 27 touchdowns, Mayfield was selected just behind Saquon Barkley for the National Football League's Rookie of the Year. His second season in Cleveland didn't go quite as well, but with Jarvis Landry and Odell Beckham Jr. as his wide receivers and running back Nick Chubb for the 2020 NFL season, the Browns looked to be set up for success moving forward.

Beckham Jr.'s injury may have changed things, but the Browns were a completely different team than they were in their season opener. They're certainly much better than the New York Jets.

Not only has Mayfield made quite a bit of money off his rookie contract so far, he has also appeared in commercials and other advertisements with his charismatic personality.

Mayfield is the focus of several Progressive commercials along with his wife, Emily Wilkinson. He also has massive deals with Nike, BodyArmor, Nissan, Hulu, Amazon, Panini America and Allen Edmonds that are definitely boosting his net worth, but it's an in-depth money management team that's driving Mayfield's long-term success.

In an interview with The Athletic, Matt Mayfield, Baker's older brother who manages the NFL QB's business affairs for Team BRM -- named after Baker himself -- through Camwood Capital Group, said that along with endorsement deals, Mayfield's earnings have been invested in various companies including Wave, Beam, Season Share, EarBuds, PumpJack Dataworks, and an Ohio-based apparel company that creates Baker's officially-licensed apparel called Where I'm From. 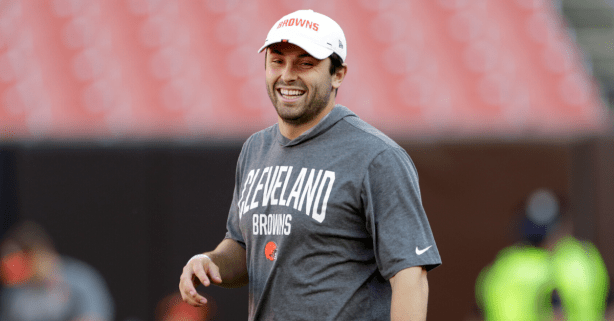 In more than two seasons as a professional quarterback, Baker Mayfield's estimated net worth is around $12 million, according to Celebrity Net Worth. Considering the lucrative endorsement deals, as well as his incredibly well-built business team, it's likely that Mayfield's net worth will approach $20 million dollars sooner than later.

If Mayfield lives up to his potential, combined with his personality that'll land him many more advertisements, the Texas native could end up being one of the wealthiest athletes in professional sports when it's all said and done.

He sent the Pittsburgh Steelers home in the 2020-21 Wild Card round and proved the Browns might just be kings of the AFC North.