Baker Mayfield Gets Brett Favre Comparisons. Are They Right? 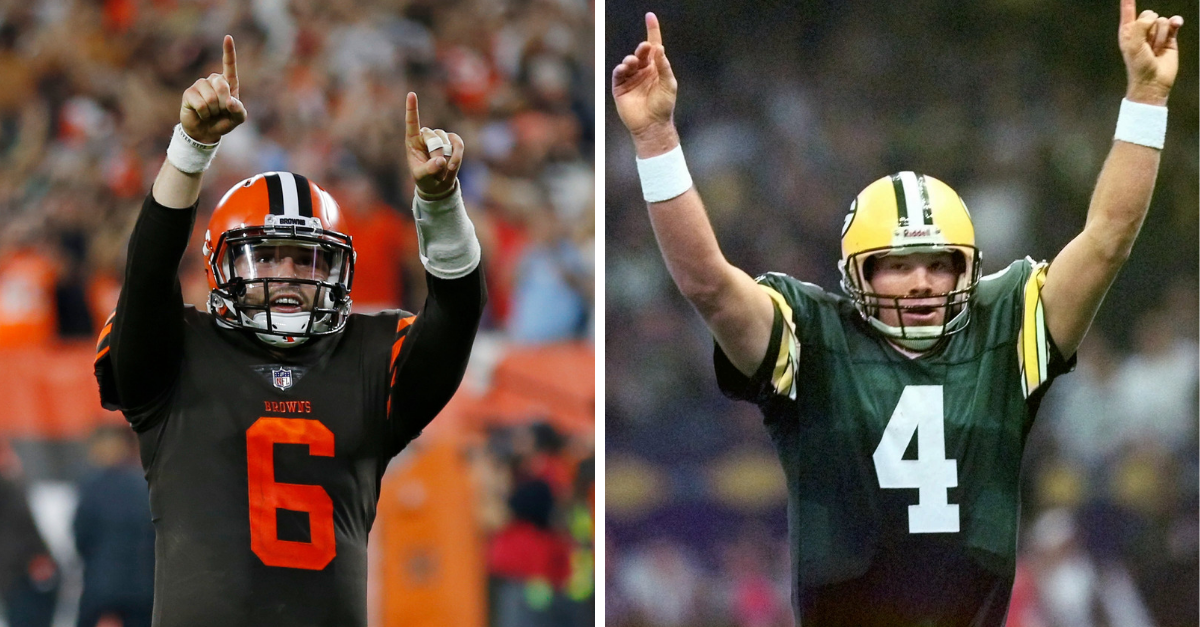 Lately, Cleveland Browns quarterback Baker Mayfield has drawn comparisons to an NFL legend. Is it fair to compare a second-year quarterback to an iconic Hall of Famer?

It is normally not a good idea to compare young players to those who were historically good. It sets almost unreachable expectations, but Mayfield being compared to Brett Favre may actually be more accurate than older football fans would ever admit.

After winning the Heisman Trophy at Oklahoma and being selected first-overall in the 2018 NFL Draft, Mayfield even took to Twitter and posed for a photo that recreated the famous Brett Favre draft-day photo from the 1991 NFL Draft when he was the 33rd pick by the Atlanta Falcons.

From there, the comparisons between both took off.

The similarities in style of play between Mayfield and Favre are not just perfect on the field, but also they’re eerily similar personalities. Favre always had an extremely charismatic attitude that made him fun to watch and cheer for. Mayfield has that same charisma that makes him fun to watch, but also easy to hate if you root against him.

But the important thing is that Mayfield plays like the Hall-of-Fame quarterback, and those similarities are extremely important to both of their games.

I know @nflthrowback posted about Favre and many mentioned the Mahomes comps, but I see so much of Favre's style in Baker Mayfield.

The throws from just his rookie year look/feel so similar in so many ways.

Here are some of the close comparisons. pic.twitter.com/2clrzrO2wM

Brett Favre was always known as a gunslinger. It is what was sometimes his biggest weakness, forcing the ball into tight windows because he trusted his arm more than he should have. But he made great plays doing this as well.

Though Mayfield has yet to show he forces the ball into tight coverage, he is still a gunslinger. He throws a tight spiral that is always on a line to his receivers. His passes are thrown hard and fast, getting to his receivers even if there is a defender close by.

Play Making on the Move

Could Baker Mayfield be the next Brett Favre 🤔🤔

The best part about Favre’s game was his ability to extend plays with his legs and move around. He wasn’t doing this for a lane to run but looking for an open receiver down the field. This usually led to his most memorable moments by just making a play outside of the playbook.

Mayfield does this same thing, moving around and waiting for his receivers to find an opening. The ability to improvise is not only a great ability that can help an offense, but is nearly impossible to plan against for a defense and is what makes them so tough to defend.

Both Favre and Mayfield began their careers as the backup quarterback, but took over early in a season, then each of them went on to start 13 games. Favre didn’t play much as a rookie for the Falcons, then began his first season with the Green Bay Packers as the backup before entering the second game of the season to become the starter.

Mayfield did get into his first game until the third week of his rookie season, leading his team to a win against the New York Jets. He did have more statistical success than Favre did in the first year as a starter. Favre threw for 3,227 yards and 18 touchdowns while Mayfield had 3,725 yards and 27 touchdowns.

Will these high-profile rookie QBs reach these heights in the NFL? All five first-rounders sat down with @RobertKlemko for The Big Interview. Watch now on SI TV https://t.co/1Bx5bU7Y3n pic.twitter.com/JmMS0NfEO9

Mayfield may have an advantage on Favre though with the weapons he has around him. Favre had some really good players around him throughout his career like Sterling Sharpe, Antonio Freeman, Donald Driver, and Ahman Green. But the Browns enter Mayfield’s second NFL season with a lot of talent.

Cleveland Browns GM John Dorsey has surrounded Mayfield with loads of talented skill-position players. They have a new head coach in Freddie Kitchens and added wide receiver Odell Beckham Jr. in the offseason.

With Jarvis Landry and OBJ at wide receiver, Cleveland has two of the top wideouts in the entire league. They also have Nick Chubb and Kareem Hunt at running back, plus David Njoku at tight end. These are all young players early in their careers and could easily be Pro Bowl options at any point.

Favre carried Green Bay to the playoffs in his second season as the starter, so hopefully Mayfield can do the same in 2019. Everyone is hopeful with high expectations for the team entering preseason.

If Mayfield and his weapons can build to the level of amazing chemistry Favre always had with his receivers, the Browns’ offense could be terrifying for years to come. It was in Favre’s sixth season that he led the Packers to a Super Bowl win over the Patriots, but I am sure Cleveland fans are hoping Mayfield can do it even faster.

And to add on to this, Favre has said both Mayfield and reigning MVP Kansas City Chiefs quarterback Patrick Mahomes play like he had, which is the most important piece of information. To have two QBs with the same styles of play as Favre in the league at once is a true treat to watch.