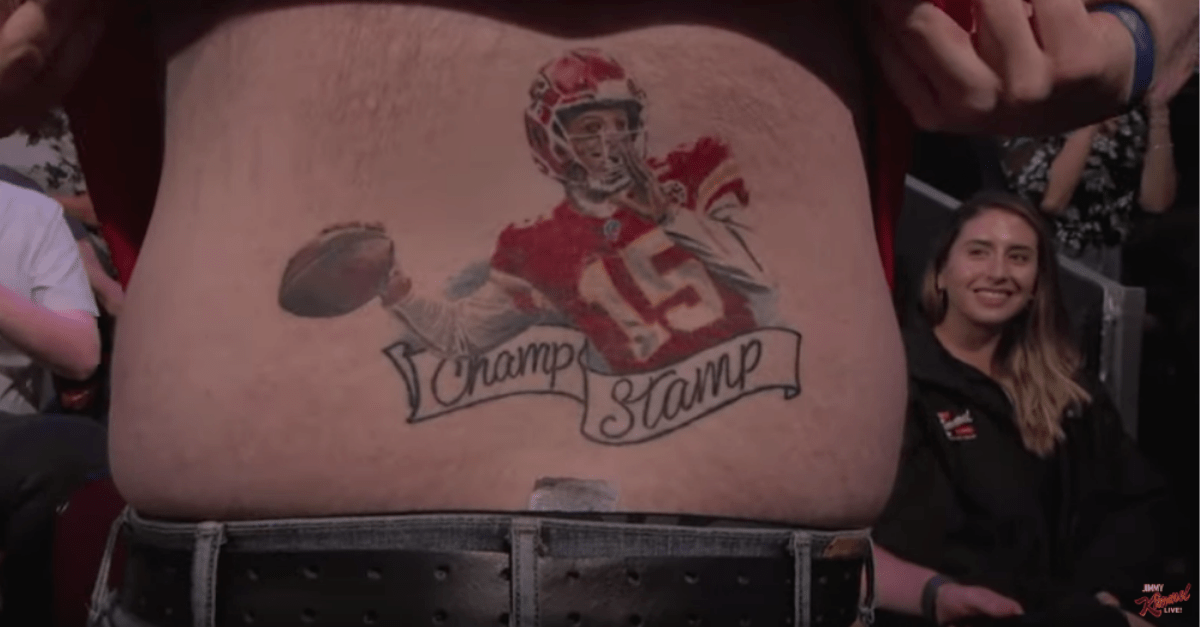 Kansas City Chiefs quarterback Patrick Mahomes is entering a league of his own. The reigning NFL MVP joined Peyton Manning as the only quarterbacks in league history to throw for 5,000 yards and 50 touchdowns in one season, and he did it in only his second year in the league. The 23-year-old was named First-Team All-Pro, NFL Offensive Player of the Year, and is the Madden 20 cover athlete.

Plus, he’s picking up quite a few crazy fans along the way.

Mahomes appeared on Jimmy Kimmel Live! on Monday night ahead of the 2019 ESPY Awards, in which Kansas City’s star QB is nominated for Best NFL Player and Best Male Athlete. Kimmel and Mahomes talked about his recent bachelor party in Nashville, what it’s like living in Kansas City, and even met one of his craziest fans on live television.

David Leach, a native of Raytown, Missouri and long-time member of Chiefs Kingdom, said on the late night show that he bet his hometown friends that Kansas City would never draft a franchise quarterback.

Well, after 5,369 yards of total offense, a 12-4 record, the No. 1 overall seed in the playoffs, and hosting the AFC Championship Game at Arrowhead Stadium against Tom Brady’s New England Patriots, Leach made good on his bet and revealed the first-ever “Champ Stamp” on his lower back.

Even better than that, Mahomes signed the damn thing after the show.

The record-setting Texas Tech QB and 10th overall pick of the 2017 NFL Draft is far from his prime, which is a scary thought considering he’s been in the league only two seasons. The youngest quarterback to throw six touchdowns in a game (22 years, 364 days) already holds multiple NFL records, including eight-straight games with over 300 passing yards.

Mahomes scored endorsement deals with Hunt’s Ketchup, Oakley and adidas, and you can be sure many more will come.

You better believe this isn’t the first, nor the last, Mahomes tattoo that a Chiefs fan will have on their body forever, but I’m throwing David Leach’s champ stamp tattoo into the ring as the greatest bad tattoo in history.

Now all Kansas City has to do is finally win a Super Bowl, and Leach’s lower back tattoo will actually make sense…

KANSAS CITY! He signed it on Jimmy Kimmel Live watch tonight!!!!!!! Yes I’m on the fuckin show! Logan Shackelford we did it. @jimmykimmellive @jimmykimmel