Meet the New Orleans Saints Fan Behind This Incredible Tattoo 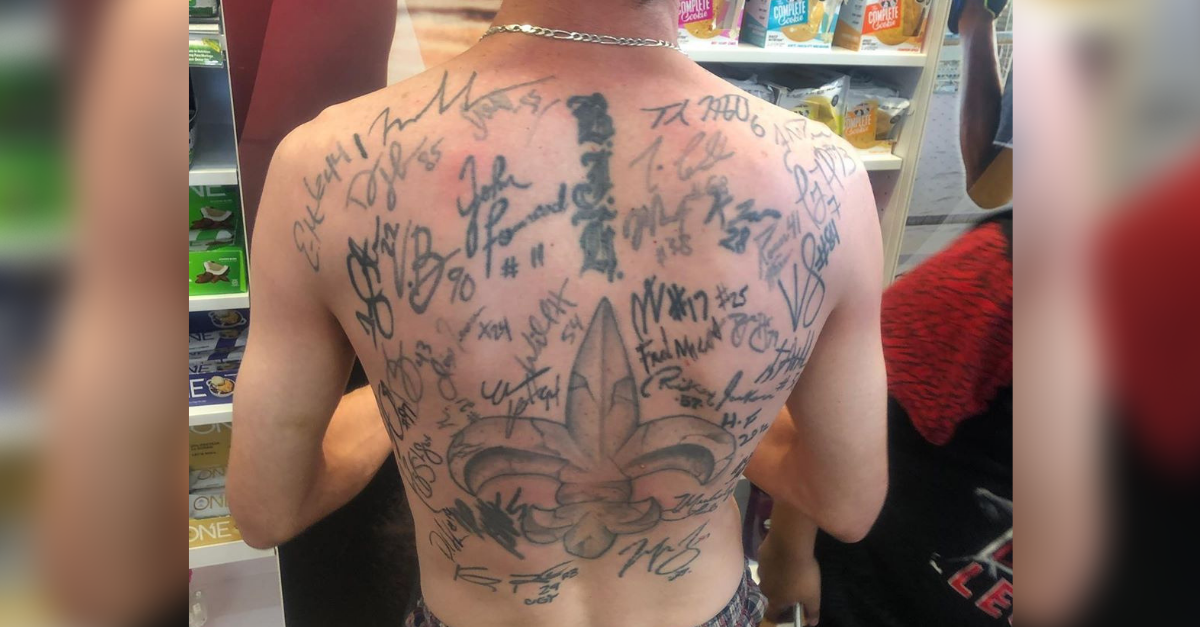 On Wednesday night, New Orleans Saints quarterback Drew Brees posted a photograph to his Instagram account. The man in the picture had a massive fleur-de-lis tattoo in the center of his back, surrounded by signatures from Saints players over the last decade. But it was Brees, the future Hall of Fame quarterback and MVP of Super Bowl XLIV, who was next on the list.

As it turns out, 38-year-old Brian Henry was hunting to get Brees’ signature right in the middle of his fleur-de-lis tattoo from the very beginning.

“Drew is the piece I chased since I started,” Brian tells FanBuzz. “I had the fleur-de-lis done in April of 2011, and the first Saints tattoo signatures were October 2011 ? Robert Meachem and then Leigh Torrence ? on the same day.”

After finally landing Brees’ signature after eight years of near misses and close calls, seeing the NFL legend shout him out using his personal Instagram page left Brian Henry in complete awe.

“I put off a Deuce McAllister and [Alvin] Kamara chance to hope I could make Drew the 33rd autograph,” Brian said. “Drew’s signature made [tattoo] number 33.”

For those missing the reference, three times three equals nine (Brees’ jersey number), which will eventually be retired and hang in the rafters down in New Orleans forever.

Now this is commitment! One of the most loyal members of the Who Dat Nation I’ve ever met. He wanted me to sign in the middle of the Fleur de Lis to get inked!

Brian married his beautiful wife Mandy, has six children, and was born and raised in New Orleans, where he works as a mechanic. As a life-long Saints fan, Brian has attended Saints games since 1983, but his go-to game every year is the New Orleans’ home matchup with their NFC South rival Atlanta Falcons.

Henry told FanBuzz that after his house was broken into and his Saints memorabilia was stolen, it was time to make a permanent memory that he’ll carry with him forever in Who Dat Nation.

Journey to fill my back with saints autographs is coming to an end soon. Never thought I could have 34 signatures it's getting time to start thinking about the pain of the rib cage and arms. #saints #whodat #saintsnation #whodatnation

RELATED: This Guy’s Nick Saban Tattoo is the Stuff of Legends

Need more proof Brian Henry is one of the most dedicated fans you’ll find anywhere in the National Football League? He was there when on September 25, 2006 when the Superdome was first reopened after housing thousands of people following the devastation of Hurricane Katrina.

That’s the game where New Orleans legend Steve Gleason blocked a punt barely one minute into the game, which was recovered for a touchdown and caused the Superdome to erupt. It’s considered by some to be the greatest play in Saints history.

“That block is what made my voice go on vacation,” Henry laughed.

Brian Henry gets his work done by Dominic Sgro, a well-known tattoo artist at Catahoula Tattoo in New Orleans. Now that he has his favorite autograph finished, as well as signatures from iconic Saints like wide receivers Michael Thomas and Devery Henderson, it’s time to keep adding to his incredible collection.

“I just got a tip of Kamara doing a session this Saturday night,” Henry said.

Good luck finding a cooler super fan anywhere around the NFL quite like Brian Henry down in Louisiana.