Alabama Has More Postseason Wins in Atlanta Than the Falcons 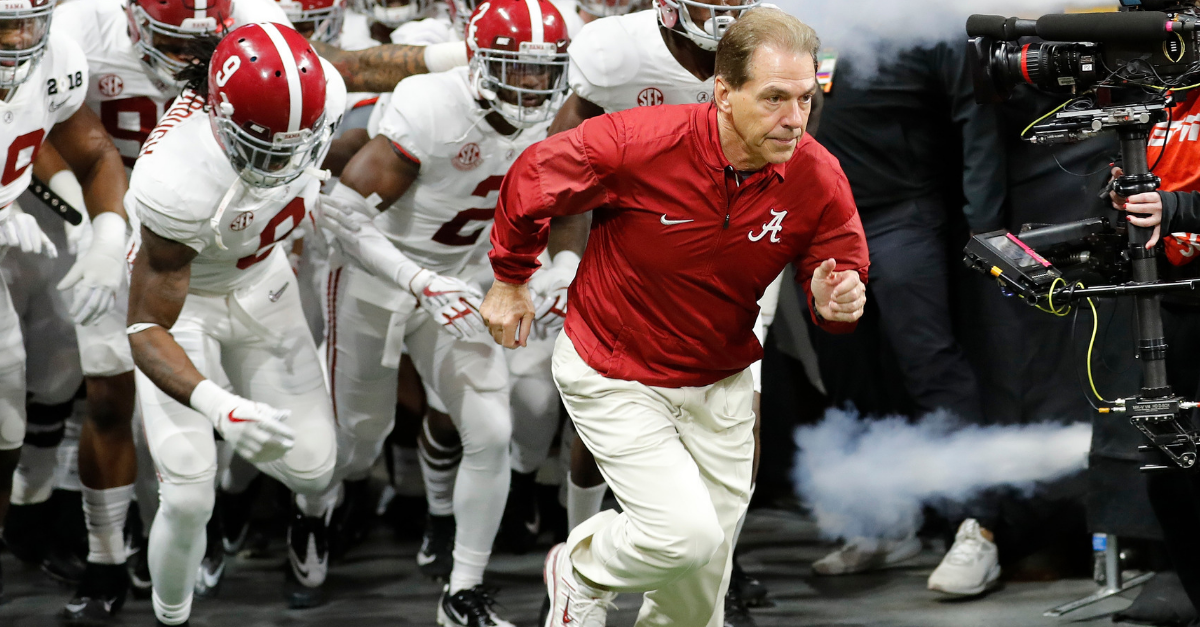 Each and every year, despite the fact it will never happen, people always want to debate whether or not the best college team in the country would ever beat an NFL team. Some would argue it?s impossible, and a group of kids don’t stand a chance against grown men. Others would argue it could actually happen on any given day. There is just really no way to tell.

During the 2018 season, one betting site said the Buffalo Bills, who were easily the worst team in the league at the time, would beat Nick Saban?s Alabama Crimson Tide by more than four touchdowns. Although that number seems a bit high, it just shows you how much oddsmakers believe professional football is better than even the greatest college teams.

Still, it will never stop people from wanting to talk about it.

According to the VP of Risk Management at @SuperBookUSA (@golfodds), they'd set the Bills as a 28.5-point favorite in a hypothetical game against Alabama.

Do you know what?s not up for debate? Postseason wins. And do you know who has a lot of them from the Southeastern Conference? Alabama.

In fact, the Alabama Crimson Tide has more postseason wins in the city of Atlanta than the NFL?s Atlanta Falcons. Seriously, this is a real thing.

Don?t believe me? Let?s take a look at the numbers.

Since 1999, The University of Alabama has registered a 9-4 overall record in games played at the old Georgia Dome or the new Mercedes-Benz Stadium in downtown Atlanta. The Crimson Tide have gone 7-4 in SEC Championship games and 2-0 in the College Football Playoff there, including a CFP semifinal win over the Washington Huskies in the 2016 Peach Bowl and a thrilling overtime victory over the Georgia Bulldogs in the 2018 College Football Playoff National Championship Game.

The national title win, of course, deserves a big thank you to quarterback Tua Tagovailoa, who replaced starter Jalen Hurts, and his performance in the second half, including the game-winning touchdown pass on that fateful Monday night.

What?s crazy is the only team to beat Alabama in Atlanta for the conference championship is the Florida Gators, and the last loss came over a decade ago. That?s how special head coach Nick Saban has been with leading the program from Tuscaloosa, including winning the SEC title game over Georgia and head coach Kirby Smart last season. The sample size is massive when you really think about it.

That doesn?t even include some massive FBS bowl game wins in the Sugar Bowl in New Orleans, the Cotton Bowl in Dallas, the Fiesta Bowl in Arizona, the Orange Bowl in Miami or the Rose Bowl in Pasadena, California over the years during the BCS and CFP eras, either.

On the other hand, the Atlanta Falcons have not been nearly as fortunate.

Since 1978, the NFL franchise has recorded a 6-3 record in home playoff games. That?s certainly a respectable number, but it?s pretty crazy a college team in a neighboring state has more postseason victories than the NFL team that actually plays all of its home games there every single year.

What does this actually mean? Likely nothing significant. However, the next time someone tries to argue whether an NCAA team with a Heisman Trophy candidate ? whether it?s Alabama, the Clemson Tigers, Ohio State Buckeyes, Oklahoma Sooners, Texas Longhorns, Michigan Wolverines, Notre Dame Fighting Irish or even the Auburn Tigers ? could beat an NFL team, you can tell them the Crimson Tide have more postseason wins in Atlanta than the Falcons and watch their jaw completely drop.