Is Tua Tagovailoa The Most Overrated Player In The NFL Draft? 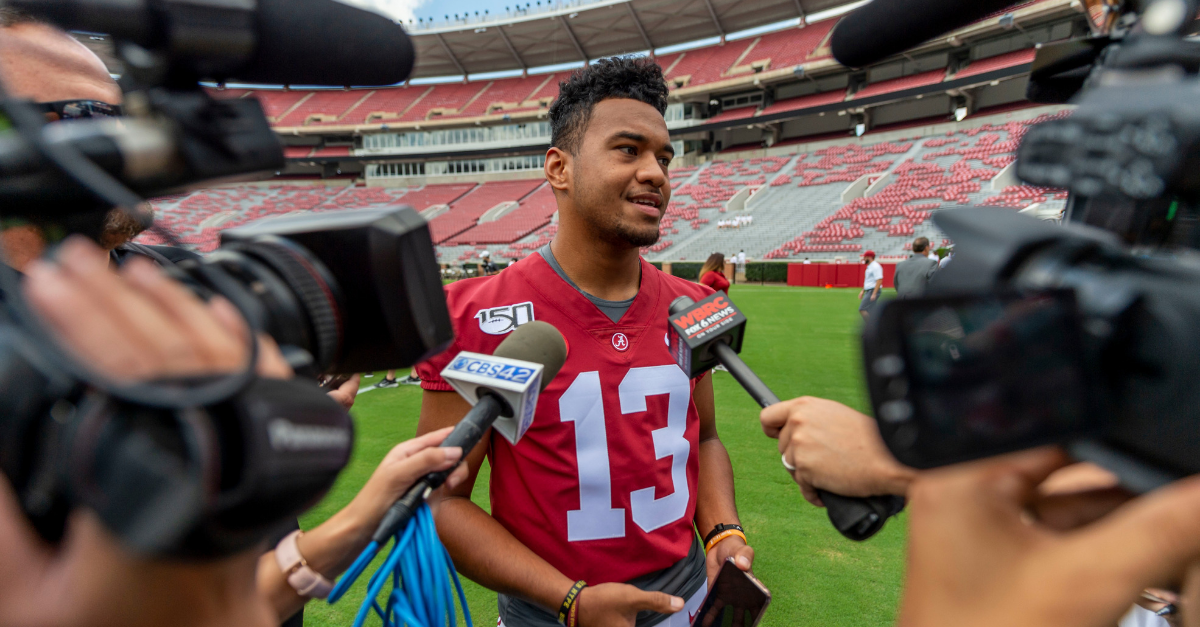 Tua Tagovailoa is all but set to become a first-round pick in the 2020 NFL Draft, and he and his family will celebrate accordingly. One NFL team will select the former Alabama Crimson Tide quarterback and make him their franchise signal caller. But are we really sure Trent Dilfer is correct and he “throws better” than Aaron Rodgers and Dan Marino?

When you enter a season with zero career college starts, 77 total passing attempts and hadn’t even officially locked down a starting job on your own team, you typically aren’t a Heisman Trophy candidate ? that is, unless your name is Tua Tagovailoa.

According to the Las Vegas Sportsbook, the Ewa Beach, Hawaii native started the 2018 college football season with the best odds of anyone to take home college football’s top individual honor. The sophomore thrived as the Alabama Crimson Tide’s starting quarterback, but the wheels fell off the wagon, and he ended up not even finishing two of this year’s biggest games. Will Tagovailoa ever become a star under pressure, or is he simply the product of being in the right place at the right time?

After blowing the doors off the SEC and leading his team to an undefeated regular season in 2018, the Crimson Tide entered the SEC Championship game with all the momentum in the world. However, relentless pressure and the fastest defense he’d faced all season proved too much for Tagovailoa, and he completed just 40 percent of his passes, threw two interceptions, and exited that game with a career-low 15.1 quarterback rating.

After rebounding in the Orange Bowl against Kyler Murray and the Oklahoma Sooners, whose defense allowed 453.8 yards per game (114th in the country), Tagovailoa was mobbed in the College Football Playoff national championship game by the Clemson Tigers.

In summation, here are the Tagovailoa’s averages against LSU, Mississippi State, Georgia and Clemson, which are the four-best defenses he faced in 2018:

Tagovailoa followed up that 2018 season by playing in just nine games in 2019. He was well on his way to a Heisman Trophy, throwing for 33 touchdowns and more than 2,800 yards, before suffering a dislocated hip against Mississippi State.

The injury not only ended his season but begged other questions: Is Tua Tagovailoa injury-prone? Can he withstand hits in the NFL? In short, it’s hard to tell. Videos have surfaced post-injury, but until Tagovailoa takes the field against actual players breathing down his neck, no one can be sure.

The St. Louis High School graduate was the No. 1 rated dual-threat quarterback of the 2017 recruiting cycle, and the top player in the state of Hawaii, according to 247Sports. The southpaw has a rocket for an arm, but it only took 24 throws in the 2018 College Football Playoff national championship against the Georgia Bulldogs to convince Alabama fans that Tagovailoa was the real deal.

Coming in during the second half of a game the Alabama football team was losing, the pressure on Tagovailoa of that magical 2018 CFP Title Game wasn’t even close to what it was last year. The young QB stepped into the fire, and he got burned.

Oh yeah, he was also taught by the greatest CFB head coach of all-time, Nick Saban.

Everybody in college football crowned Tagovailoa before he’d shown us what he was all about. Now that we’ve seen him shrink when the pressure was highest and shown his injury concerns, are we so sure the coveted first-round pick and future NFL quarterback in Tuscaloosa is really the best option in the NFL Draft?

This post was originally published on August 20, 2019, but was brought back prior to the 2020 NFL Draft.