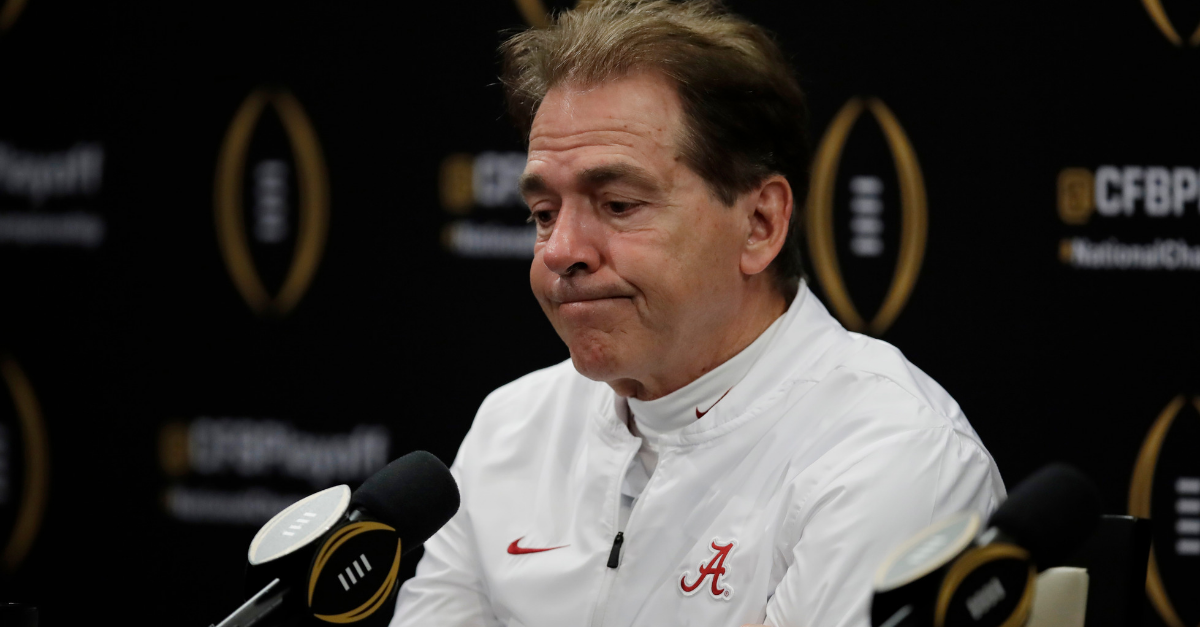 Heading into the 2019 College Football Playoff national championship game, there was little doubt it would be a matchup for the ages. Pitting two programs in Alabama and Clemson against each other, both of which had all the makings of an all-time great team, figured to deliver an instant classic that would stand the test of time.

Boy, were we wrong about that. The Clemson Tigers knocked the Alabama Crimson Tide backwards early, put their foot on the gas, and steamrolled the Tide by the final score of 44-16. It was the most lopsided national championship game since Alabama beat Notre Dame, 42-14, back in 2012. Blame will fly all around, but this loss sits squarely on Alabama head coach Nick Saban, and even he knows that.

From the Crimson Tide’s inefficient first half to their inability to rally late on Monday night, this game was a runaway that shocked college football fans around the country. In honorable fashion, Nick Saban shouldered all of the blame.

“I think the responsibility for us not playing well really starts with me. We obviously didn’t go out there, and they did some things that we weren’t prepared for, but you always expect that,” Saban said during a gloomy press conference alongside Heisman Trophy runner-up Tua Tagovailoa and defensive back Xavier McKinney.

This loss exposed problems Alabama had all season long, but they were magnified on the game’s biggest stage. The Crimson Tide dealt with these same hiccups from the start of year, and Clemson head coach Dabo Swinney knew exactly how to exploit these three problems from the opening kickoff of the CFP title game.

All season long, after two kickers combined to miss 14 kicks including an NCAA-high eight missed extra point attempts, the Crimson Tide coaching staff were forced to make a questionable decision early in the second half that cost them in a big way.

Facing fourth-and-6, third-string quarterback Mac Jones took the snap and followed his lead blocker, which was incredibly 206-pound kicker Joseph Bulovas, and the Clemson defense snuffed it out before the play began.

Had Alabama had a respectable kicking game, maybe this attempt ends up better. Still, the first drive of the second half ended with a poorly-executed fake, which turned out to be the final crack that broke the dam wide open. The Tide’s inept kicking game is fully to blame, too.

Having already lost cornerbacks Trevon Diggs and Jalyn Armour-Davis for the season, the Crimson Tide were slim pickings on the back end of their defense. Then, when junior college transfer Saivion Smith went down with an injury in the third quarter, things got even worse.

Smith went down on a non-contact injury that led to Clemson wide receiver Justyn Ross being WIDE open. The true freshman from Phenix City (AL) would race 74 yards for a touchdown that extended the Tigers lead to 37-16 in the third quarter. The rout was on, and there was nothing Alabama could do.

True freshman quarterback Trevor Lawrence, who was named the game’s Offensive MVP, torched Alabama’s top-25 passing defense to the tune of 347 yards and three touchdowns. If there is one Achilles heel of this team that would be exploited, it was struggling cornerbacks that even Xavier McKinney and All-American safety Deionte Thompson couldn’t overcome.

Aside from Tagovailoa’s 1-yard touchdown pass to tight end Hale Hentges, the Crimson Tide were putrid when they managed to work the football inside the 20-yard line. After getting stopped on fourth down to start the second quarter, they settled for a Joseph Bulovas 25-yard field goal.

After that, Alabama scored zero points on their next two red zone attempts, plus the anti-climactic fake field goal from the Clemson 22-yard line.

In a record-setting season for the Alabama Crimson Tide offense, they finish the 2018-19 college football season ranked 77th in the country in red zone efficiency after scoring on just 65 of their FBS-high 79 drives inside the 20-yard line.

Clemson smoked Alabama from start to finish in Santa Clara, Calif. The national title game went from bad to worse in a hurry, and one of the most promising seasons in Tuscaloosa in a long time ended with a sobering reality check:

Alabama wasn’t as dominant as we thought they were.

READ MORE: Sorry, Alabama: You’re the Next Victims of ‘The Drake Curse’