Alabama-Clemson is Here, and These Hype Videos Will Have You Ready for War 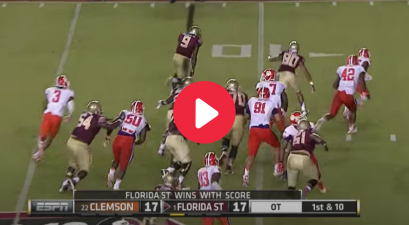 After a long college football season filled with insane trick plays, unbelievable performances, and even a live animal mascot fight, the final two teams are ready for war. The Alabama Crimson Tide and Clemson Tigers will meet in Santa Clara, California for the College Football Playoff national championship game, and the winner will become the first 15-0 champion in the last 121 years.

The pivotal matchups and game plans in preparation for this game are only half the battle. Then again, if either of these teams need added motivation for this one, then they probably shouldn’t be on the field. For the rest of us, we can sit back and get our blood pumping as both programs have dropped insane hype videos that’ll have you up out of your chair and ready to tackle the closest object near you.

For starters, the top-seeded Alabama Crimson Tide have the chance to be the No. 1 team in the AP Poll from start to finish this season. Led by Heisman Trophy runner-up quarterback Tua Tagovailoa, All-American defensive tackle Quinnen Williams, a potential top-5 pick in the NFL Draft, and of course, the greatest mind in college football history, head coach Nick Saban.

Ahead of the Crimson Tide’s national title defense, which could make them the first back-to-back national champs since, you guessed it, Alabama in 2011 and 2012, the university dropped this hype video. It’s complete with speculation prior to this season from commentators who said the Tide’s “quarterback conundrum” and their defense with “a lot of holes” wasn’t nearly as good as Clemson.

On the other side of the coin, freshman quarterback Trevor Lawrence, All-American defensive tackle Christian Wilkins, and the Clemson Tigers are back with a vengeance. Their video includes highlights of the three previous matchups between these two programs — the 2015 and 2016 National Championship games and the 2017 national semifinal at the Sugar Bowl — as well as highlights from head coach Dabo Swinney‘s fourth-straight ACC Championship season.

At the end is a subtle hashtag to rally all of the Clemson football community, and it simply reads #BeatBAMA.

Is your blood pumping yet? Are ready to toss this cell phone into a drawer, slide your chair up to the television, and watch the two best programs in college football collide for the fourth year in a row? Yeah, I am too.

Levi’s Stadium will house the climax to an amazing college football season, and if these two teams live up to their preseason billing, this national title game is going to be another instant classic.