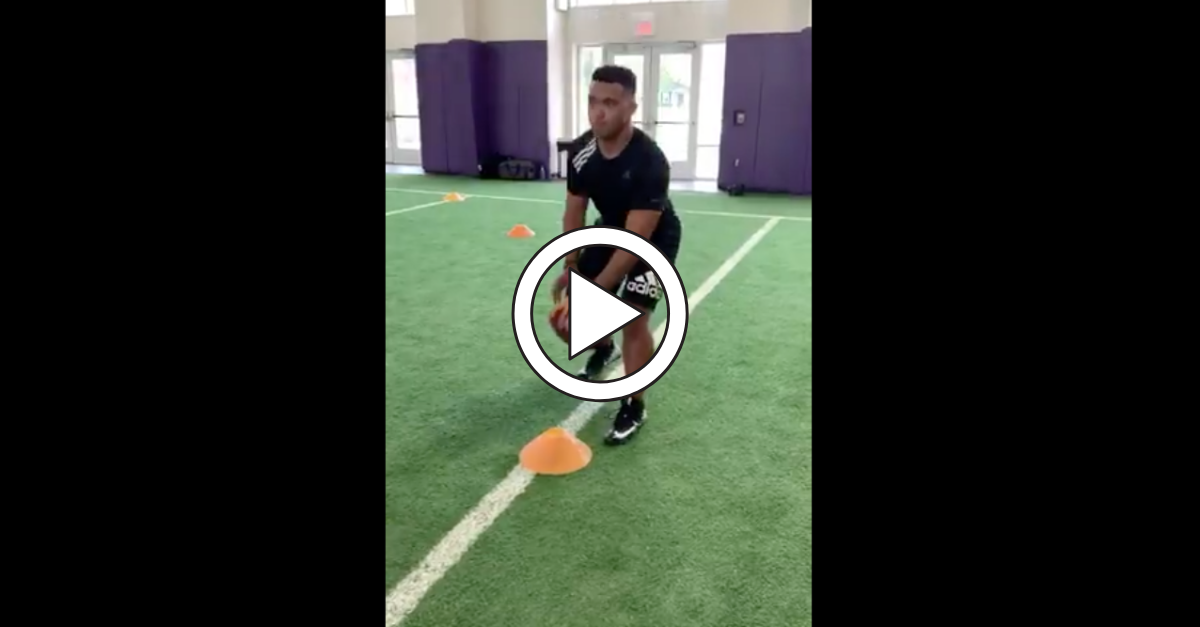 It’s NFL Draft season, and there are a few major storylines to follow in the days leading up to that big night on April 23. The first is how much money the Cincinnati Bengals are going to give LSU’s Joe Burrow after taking him with the first-overall pick despite those tiny, hilarious hands we discovered at the NFL Combine.

The second storyline — and the one that will determine the rest of the first round — is which team will take former Alabama Crimson Tide quarterback Tua Tagovailoa? Since suffering his season-ending hip injury last year, the star passer from Hawaii has steadily recovered from surgery and received the all-clear to partake in football activities earlier this month.

But considering every sports-related gathering is canceled because of the coronavirus, Tagovailoa had to turn to social media to show NFL teams what they needed to see before making him their franchise quarterback.

Tua Tagovailoa posted a video of him throwing a football and doing footwork drills this week, and it’s almost as if he was never injured.

“Practicing social distancing with the long ball today. Feels good to spin it again. #Process” he wrote on Twitter.

Yep, the hip checks out.

That looks like the same player who threw 87 touchdowns and 11 interceptions in three college football seasons. Tagovailoa may very well have earned a couple million dollars by posting this video, and I’m sure he knows that.

ESPN’s Dan Orlovsky said on Get Up that he was “shocked” at how good the potential top pick looks despite needing crutches only six or seven weeks ago.

“I did not expect this in March,” the former NFL quarterback said.

“I think this video is now going to set off a chain of events.”

"I am shocked at how good Tua looks."@danorlovsky7 loved what he saw from Tua Tagovailoa's recent social media video. pic.twitter.com/Vl94jJ39D1

Nobody is sure where Tagovailoa will fall in the draft, which kicks off April 23.

Some NFL mock drafts have the Redskins taking Ohio State’s Chase Young and the Chargers picking Tagovailoa at No. 3 after letting free agent Philip Rivers head to the Indianapolis Colts this offseason. That would leave the Dolphins with Oregon’s Justin Herbert at No. 5. Others have the former ‘Tide star heading to Miami at the fifth overall pick.

Plenty of teams still could use a talented signal caller like Tagovailoa even after all the free agency shuffling headlined by Tom Brady. The Dolphins have plenty of first-round picks as firepower, but will a team let ahead of them let them trade up for the draft prospect of their dreams?