Cincinnati Bengals quarterback Joe Burrow quickly became a very, very rich and popular man. Over the course of the last few years, the former LSU Tigers quarterback led the Louisiana State University to a College Football Playoff national championship game victory over Clemson, won the Heisman Trophy and starred in his first-ever commercial alongside some pretty prominent NFL stars. But as Joe Burrow's girlfriend Olivia Holzmacher knows, he could be in a commercial with Britney Spears and Joe Cool wouldn't even flinch.

The Cincinnati Bengals selected the Louisiana legend with the first overall draft pick in the 2020 NFL Draft (which was virtual thanks to the coronavirus pandemic), and the Heisman Winner became a multi-millionaire rookie after signing a four-year, $36.1 million contract, per ESPN's Field Yates.

Burrow suffered a nasty knee injury against the Washington Football Team last year as the Bengals rookie quarterback -- tearing his ACL and MCL in his left knee -- but he worked hard to be ready for the 2021 season with the Bengals. And boy, did that hard work pay off.

Now, Burrow is a Super Bowl quarterback and even one of the faces of the NFL. He's also one of the most sought-after unmarried quarterbacks in the league. Unfortunately for anyone interested, Burrow is taken. 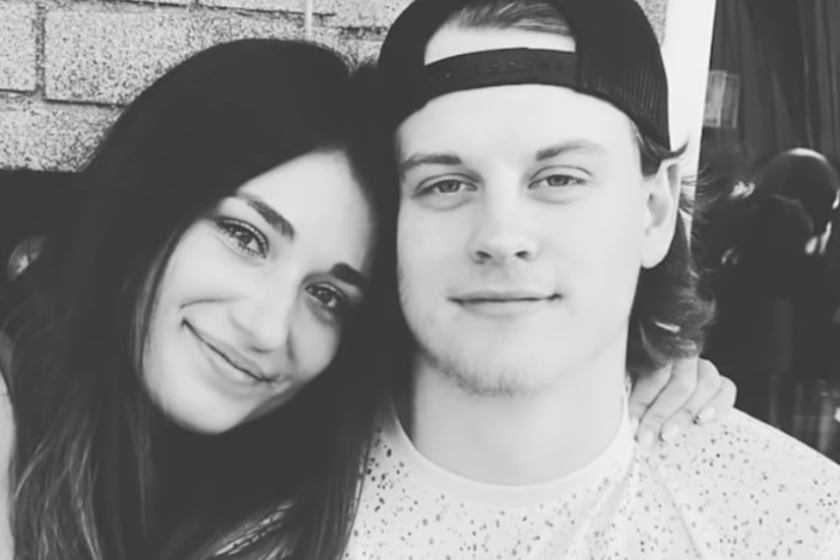 The 25-year-old Bengals QB has been pictured with his girlfriend before and after games numerous times, but who is Joe Burrow's mystery girl?

Holzmacher was born to Susan Holzmacher and John Holzmacher in Mason, Ohio, where she played volleyball at Mason High School.

According to her LinkedIn profile, she's a senior process specialist and data analyst at The Kroger Company, a Cincinnati-based job that began in February 2019. She previously worked for a gym called Lifetime Fitness in Deerfield, Ohio.

The Ohio State Buckeyes Brought Them Together 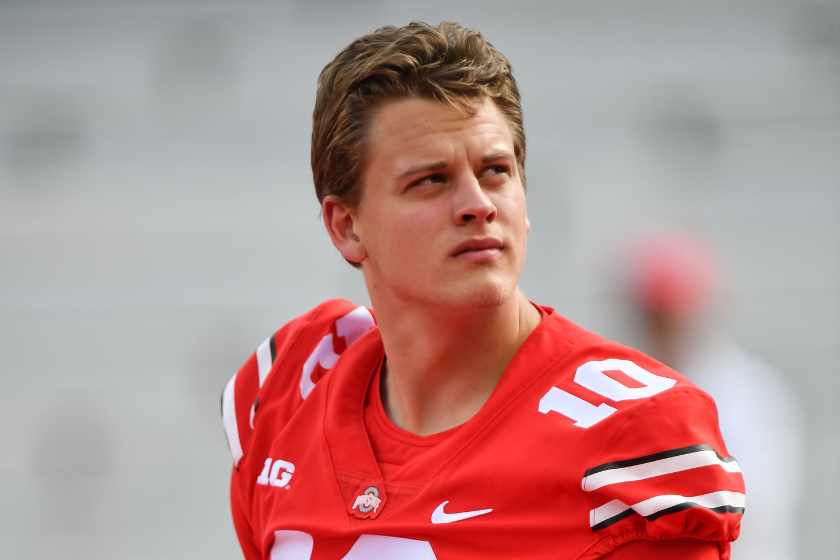 She met the Heisman Trophy winner for the first time when she was studying data analytics at THE Ohio State University around 2017 according to the New York Post. Burrow, who attended Athens High School in Ohio, landed in Baton Rouge after transferring from the Big Ten school in 2018, and Holzmacher graduated in 2019, also reported by the NYPost.

Judging from Instagram pictures on Holzmacher's account, the college college sweethearts have been together for at least four years. She also has more than 93,000 followers on her social media account. That's a lot of followers trying to catch a glimpse of the happy couple in an Instagram story.

Aside from supporting Burrow as much as possible, Holzmacher previously partnered with Verb Energy, which sells energy bars. 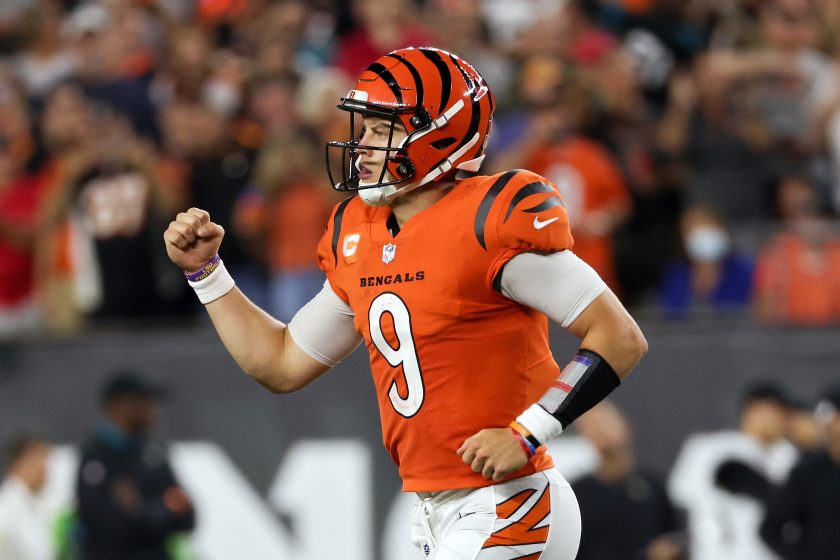 Holzmacher has called herself Joe Burrow's No. 1 fan, though she may face stiff competition from the LSU football faithful after the legendary 2019 NCAA season. Still, she's stuck by the football player's side for more than two years.

After Burrow led the Tigers to a national title in a 42-25 win over Clemson in the Mercedes-Benz Superdome in New Orleans, Holzmacher's Instagram post included photos from inside the venue. At the same time, Burrow was shooting up NFL mock draft boards.

"I'm so proud of you! The best weekend ever!" Holzmacher said on Instagram after the speech.

During Burrow's NFL debut against the Los Angeles Chargers, Holzmacher was in the stands as a cardboard cutout next to Burrow's parents inside Paul Brown Stadium. When Burrow plays during the NFL playoffs, she's sure to be a trending topic all over social media.

It's pretty clear she'll always be rooting for her NFL player boyfriend on the sidelines when he's playing.

Her Special NFL Draft Message to Him 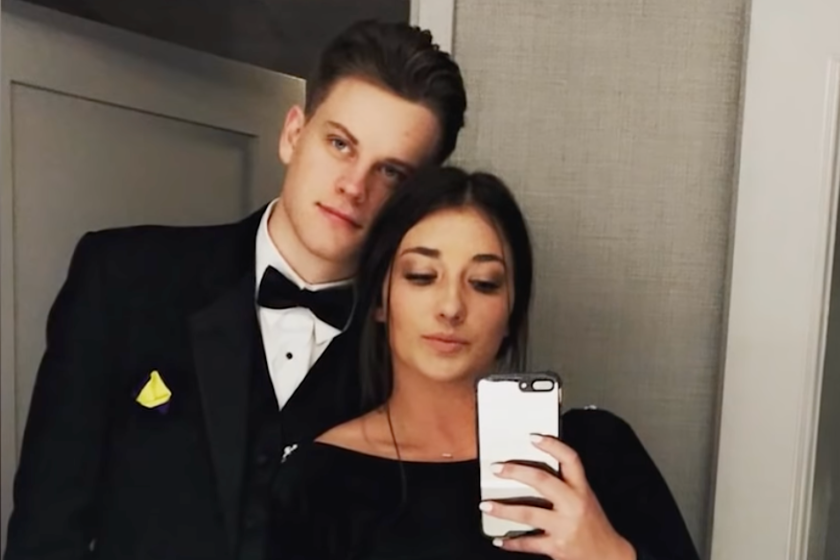 RELATED: Zac Taylor's Wife Sarah is the Daughter of a Former NFL Coach

Holzmacher posted a number of photos prior to the 2020 NFL Draft, which her man headlined as the first overall pick. Joey Burrow would be a smart man to keep her by his side and make her part of the Burrow family.

"Tonight a new chapter starts! Thankful to be by your side Joe and to be a part of the past three seasons. I've had the best experiences and met the best people along the way. So excited for what the future holds. Tonight will be once in a lifetime," she wrote on Instagram.

Holzmacher is a lucky woman. Burrow has shown Bengals fans, LSU fans and the rest of the nation that he's charismatic, funny (have you seen his Ed Orgeron impression?) and an overall cool dude. They don't call him Joe Cool for nothing.

There are already power couples galore in the NFL -- Russell Wilson and Ciara and Tom Brady and Gisele Bundchen -- but Burrow and Holzmacher are the hottest new kids on the block, not just another pairing on the WAGS (wives and girlfriends) list.

Joe Burrow is already becoming the talk of the NFL as he throws touchdowns galore. He took down the Las Vegas Raiders in the 2021 Wild Card round and picked up another playoff victory against the Tennessee Titans in the NFL Divisional Round before advancing to the AFC Championship Game against the Kansas City Chiefs. Sure, Super Bowl LVI didn't turn out the way the Bengals and the LSU alum wanted, losing to the Los Angeles Rams at Sofi Stadium.

And as Joe Cool and the Bengals begin their revenge tour in 2022, following their Super Bowl appearance and loss to the Los Angeles Rams, there's no doubt his longtime girlfriend and No. 1 fan will be right by his side.

This post was originally published on March 16, 2020 and has been updated since.