For the Buffalo Bills, the number 3 was an important one heading into their Week 18 matchup with the New England Patriots. Less than a week after Buffalo watched from the sideline as Bills safety Damar Hamlin fought for his life on the field against the Cincinnati Bengals after suffering a cardiac arrest, the Bills were back on the field. And with emotions running high during the opening kickoff, running back Nyheim Hines decided to let everyone at Highmark Stadium, everyone in the NFL, and, most importantly, Damar Hamlin, know that they were ready to play for their fallen brother. How did he do that exactly? With a 96-yard kickoff return for a touchdown. 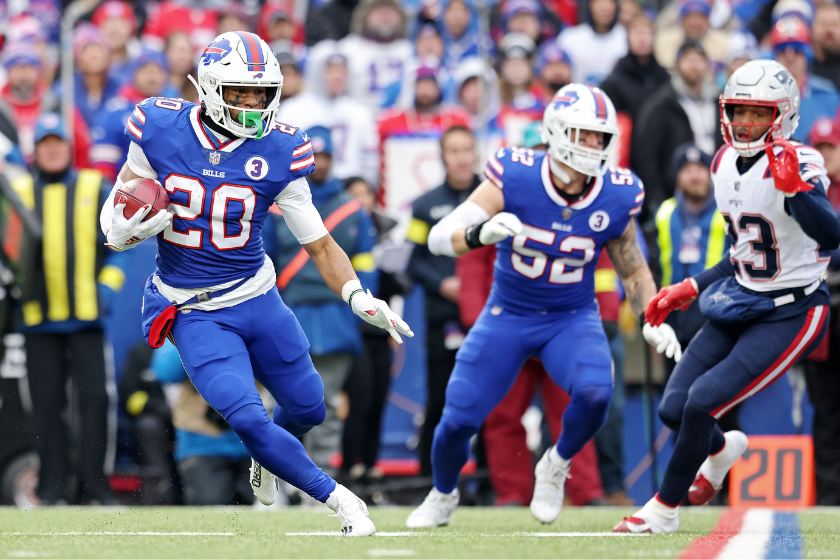 As the Bills faced off with their AFC East rival on CBS, the football world had their eyes glued to their television sets. After an emotional first game after Damar Hamlin collapsed Monday night ended with a resounding Kansas City Chiefs win over the Raiders, fans were breathing easier. But everyone was awaiting the first play of the Bills game, especially Hamlin, who watched from his hospital bed. Hamlin remains in critical condition, but was able to speak to his team for the first time ahead of Sunday's game.

God Behind All This No Coincidence..3?? https://t.co/J2dCVv4VBN

The quick start to the game would announced to the world that the football team in Orchard Park, New York, is ready for the playoffs and ready to play for their brother.

The NFL community rallied around Hamlin, with everyone from broadcasters, players, and even referees were wearing shirts with "Love for Damar" on the front during their pregame activities, and some even opting for Hamlin jerseys.

As the 2022 regular season wraps up and teams like the Rams, Titans and Broncos fade out of the playoff picture, and the standings reset for the Eagles, Giants, Jaguars and Ravens, it would have been easy to forget that the game of football is a dangerous one. Not only is it dangerous, but it's played by men who have families and personal lives off the field. The Buffalo Bills gave us all a reminder that life is a precious thing, and in darker times, it can be taken away in an instant.

Unreal, Nyheim Hines opens the game with a 96-yard touchdown off the kick return.

But the Bills also reminded us of something else a week after Hamlin's accident. Buffalo reminded us that magical moments can still happen in today's NFL. And not only can they remind us once they can remind us twice.

Nyheim Hines Does is Again in the Second Half

Wow. What a game. The Buffalo Bills may never call fair catch again.

MORE: Damar Hamlin's GoFundMe Has Raised More Than $6 Million, As NFL Stars Join the Cause