After two questionable slides from New England Patriots QB Mac Jones against the Chicago Bears on Monday Night Football, the internet did what it does best: Assume things that might not actually be true. 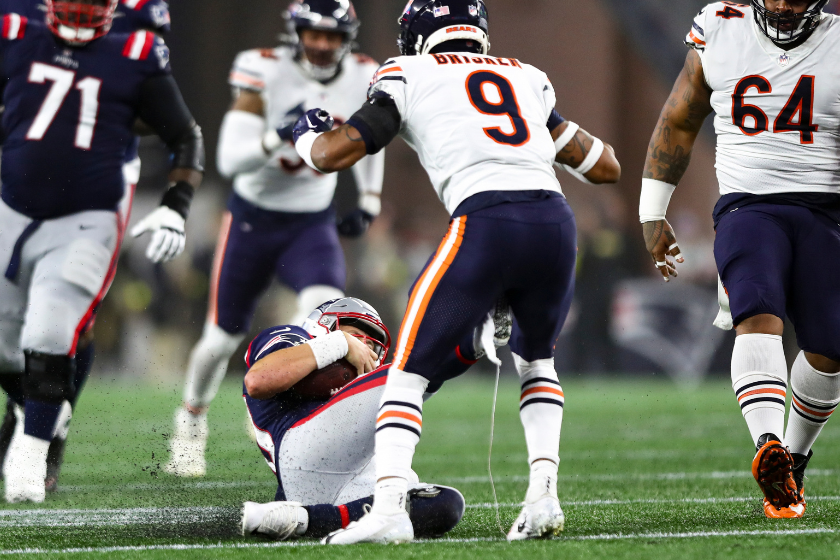 New England Patriots quarterback Mac Jones was seen sliding with his cleats up twice in the 33-14 loss to the Bears. Were these malicious slides, or does the young QB need to practice his sliding techniques?

It's really hard to tell without being Jones himself; however, there's evidence that maybe Jones has a little dirt about how he plays.

Last season against the Carolina Panthers, Jones was in the line of fire over how he grabbed Brian Burns' leg and seemingly tried twisting it, resulting in an injury to Burns. The jury still seems to be out, but this wouldn't be the first time a Patriots quarterback came under attack for being accused of trying to hurt defenders.

Tom Brady, the NFL's poster child, was also known for these type of antics, so seeing another Patriots quarterback in this type of spotlight isn't too shocking. While Jones hasn't reached the level of Brady yet, are they similar in regard to being called dirty players?

Brady has had his fair share of controversies over his 23-year NFL career, and those controversies have often included some sort of foul play. Jones is starting to get the same type of notoriety. When being compared to Brady, some would hope that it'd be due to how one plays; however, Jones is getting compared to the GOAT in all the wrong ways. Do these examples truly show how Jones plays football, or is he getting flak for being bad at sliding?

There's really no telling, as there will always be multiple sides to this: Mac Jones [is/isn't] dirty! He [meant/didn't mean] to do that! The Patriots [are/aren't] teaching their players to be dirty! No matter what, it seems as if the New England Patriots will always be a team surrounded by controversy. This time, Jones is wearing the crown.

And it's unlikely that the internet will call it quits on this narrative for a long time. Once the internet gets ahold of something like this, it's going to take a lot to move on and forget any of it happened.

It should be noted, however, that Bears safety Jaquan Brisker got the last laugh against Jones during their game, picking off the Alabama legend in what would be his final pass of the night.

MORE: New England Doesn't Have a QB Controversy, The Problem is Coaching