When Mac Jones went down screaming in pain at the end of the Patriots-Ravens game a few weeks back every Patriots fan assumed their season was over. They had fallen to 1-2, and were going to need to rely on Brian Hoyer. Unbeknownst to them, Hoyer would only be able to attempt six passes before he went into concussion protocol. Fourth-round pick and third-string option Bailey Zappe then came in as a serviceable replacement, nearly leading the Pats to victory at Lambeau field.

While Mac Was Away... 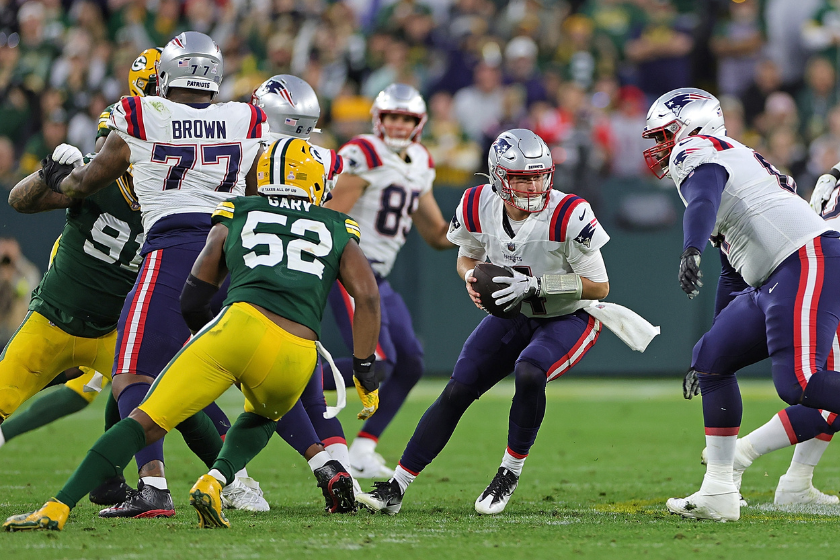 After three weeks on the sidelines, Mac Jones found his way back on Monday night against the Chicago Bears. And many would have expected the Patriots to be coming in at 1-5, given Zappe barely took first team snaps before Mac went down. What they found instead was a 3-3 team that won back-to-back games against the Detroit Lions and Cleveland Browns by a combined score of 67-15. I guess the kid from Western Kentucky was more legit than any of us thought.

Even though it was fun to watch the kid thrive, a toxic situation was starting to brew throughout New England. It wasn't just that Zappe was creating what seemed to be a legitimate competition at the quarterback position. It's that the coaching staff changed the way they operated the offense.

Sure, you'd expect to play to the strengths of whoever you have under center. But the main issue here was Matt Patricia started calling plays that would absolutely benefit Mac if he was in the game. It's like night and day. Play actions, quick slants and other simple yet effective calls, making Zappe look like the second coming of Tom Brady. Meanwhile, the GOAT seems to have run out of magic down in Tampa Bay. Coincidence or witchcraft?

Mac Attack Back Or Stay With Zappe? 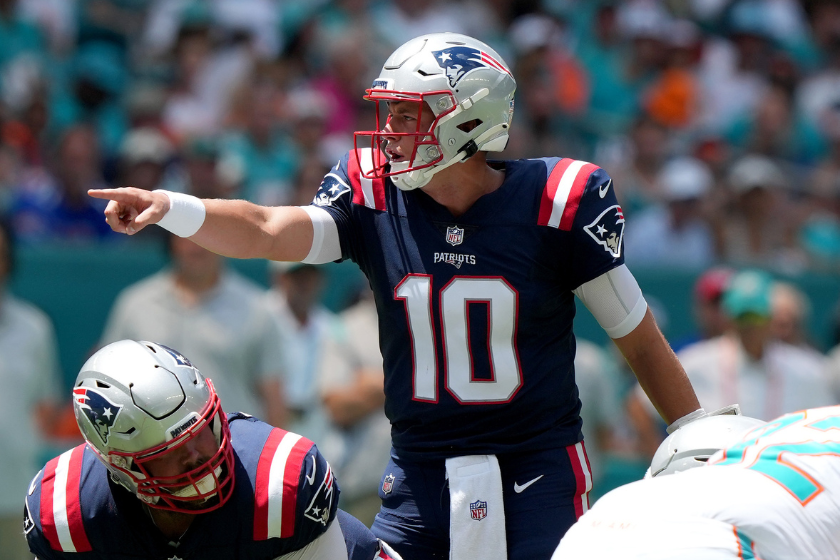 During the lead-up to Monday night's game in Foxborough, pundits throughout New England were debating whether Mac or Zappe should get the call against the Bears. Callers weighed in, and it seemed pretty divided. I, personally, was in the Zappe camp; let him play until we know for sure Mac is healthy enough to be back. Ride the hot hand, get through Chicago, the Jets and get to the bye. Then reassess.

Instead, Bill Belichick did what he always does: He gave us nothing. Rather than laying down support for his rookie, he let everyone wonder what would happen. The problem was that his decision -- or lack thereof -- seemed to affect his two young quarterbacks. It was becoming a Jim Harbaugh in Michigan situation, and that's not something you want happening at the NFL level.

The big discussion was the reasoning that the Patriots should stick with Zappe. Listening to Boston's 98.5 Sports Radio, each of their shows discussed Zappe being a "yes" man and Mac being a tennis brat who is always asking, "Why?" And we all know how Bill loves to be questioned...

Regardless of any of that talk, Mac Jones hadn't done anything wrong. He showed up to play, and did so relatively well for the most part. Sure, some of his quick thinking decisions out of the pocket were questionable. But he was reading defenses, and making plays to keep the Patriots in games. It's not like he sucked before he got injured.

Back on Monday Night Football 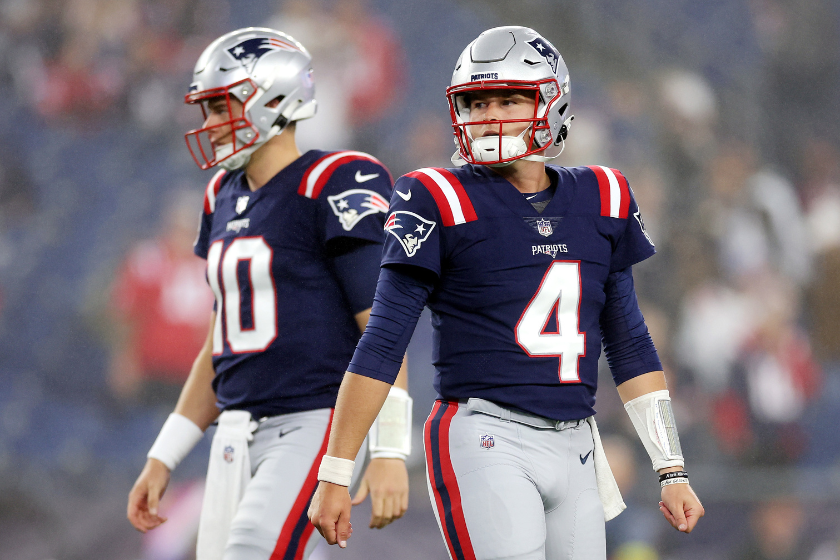 Once we got to the big game Monday night against Chicago, Mac Jones was getting run out as the starter. To me, this only makes sense if you expect to stay with Mac the rest of the season. It's putting faith in the guy who somehow managed to help you get to the playoffs last year. And that's a vote of confidence that you'd expect to get if you're Mac. However, Bill said that we could expect to see both quarterbacks at some point during the game.

This is insane. At such a pivotal point in the season you need momentum before you run into the bye week. Jones needs to shake the rust off, and Chicago would theoretically be the game to do that. However, the weather in New England was awful. It was cold and wet, leading to slippery conditions that could re-aggravate the ankle injury. Bill trotted him out there anyway.

Mac looked rusty. And the crowd let him know it. It was clear the radio show chatter had gotten into the heads of fans, and Zappe-mania abounded. Mac is unlikely to forget the disrespect from the fans in this game. But wow, he did not look good out there. He was moving okay, as we saw him run for gains a few times, but it seemed like he wasn't taking any reps in practice. As the jeers grew louder, during the next possession -- after throwing a pick -- Zappe entered the game.

And then New England scored touchdowns on back-to-back possessions. It's important to note: Mac Jones was one of the first guys to celebrate with Bailey Zappe. Those guys were as professional as they could be, and it was clear that they have each others' backs. The Pats were able to get back in the game, but in an interview as the teams were running into the locker room at halftime, Belichick said we could expect to see both quarterbacks out there in the second half. 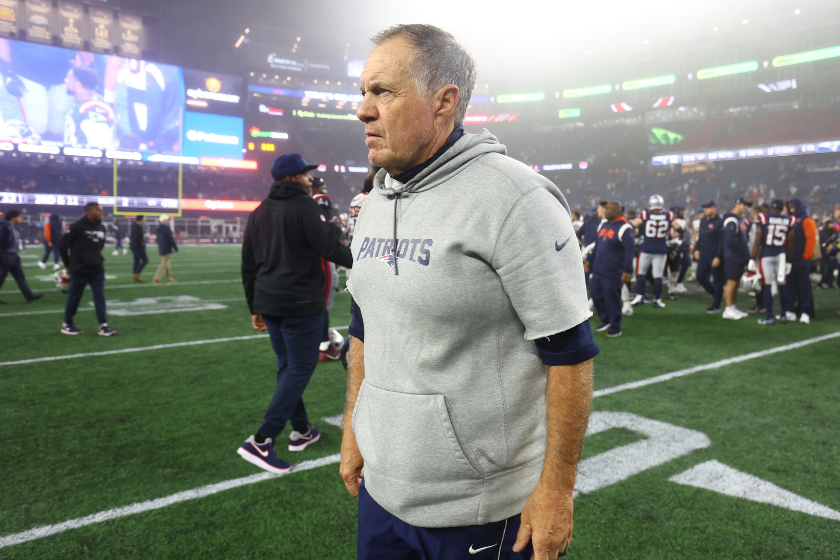 In the end, Bailey Zappe looked human. He was picked off twice on balls that were tipped. And the Patriots defense looked more porous than they have all year. It wasn't a great game for New England -- at all. But that quote from Bill at half never came to be. I do not doubt he was playing mind games, but it seems to be at the expense of his quarterbacks -- not the opposing team. If Mac expected to get another series or two in the second half and didn't, that's a breakdown in trust that the Patriots cannot afford right now.

I wouldn't anticipate the locker room taking sides or causing problems for Bill. If I'm Mac Jones, I'm wondering what I'm supposed to be doing right now. They run the rookie out there and give him a better playbook. I'm sent out to the wolves, knowing that the fans are rabid and want to stay with the hot hand. And I'm pulled after two series, letting the narrative breathe and grow.

Maybe this is Bill wanting to go with Zappe, and he sent Mac out there to get the fans behind him? Feels crazy, but we're all trying to make sense of the decisions he's making right now. Because there doesn't seem to be any sense whatsoever in the decision making. The fact is that Matt Patricia is calling different plays for each quarterback and constricting Mac's ability to play. And, while he probably wasn't ready to go out there against the Bears, it's going to be hard to put him out there again whenever he gets a shot. In the end, the Bears came away with the win, beating the Pats 33-14.

The schedule moving forward for the Patriots is not kind. Belichick and Patricia have completely botched their ability to get some consistency before they have to play the Jets and Bills twice, Vikings, Dolphins and Bengals. Heck, even the Cardinals could be problematic. If Justin Fields gave that defense fits, what's Kyler Murray going to do?

For a long time, Bill Belichick, has been known for his management. But it seems he's thrown his own playbook out the window this time around.