Even though he is no longer one of the faces of the NFL, Peyton Manning is still one of the most recognizable American icons, and his career net worth matches that fame.

Manning made a ton of money playing quarterback in the NFL, but he's earned even more through endorsements and television appearances in commercials and other programming. So, how much money has "The Sheriff" really earned and what is he worth today?

From New Orleans to Knoxville 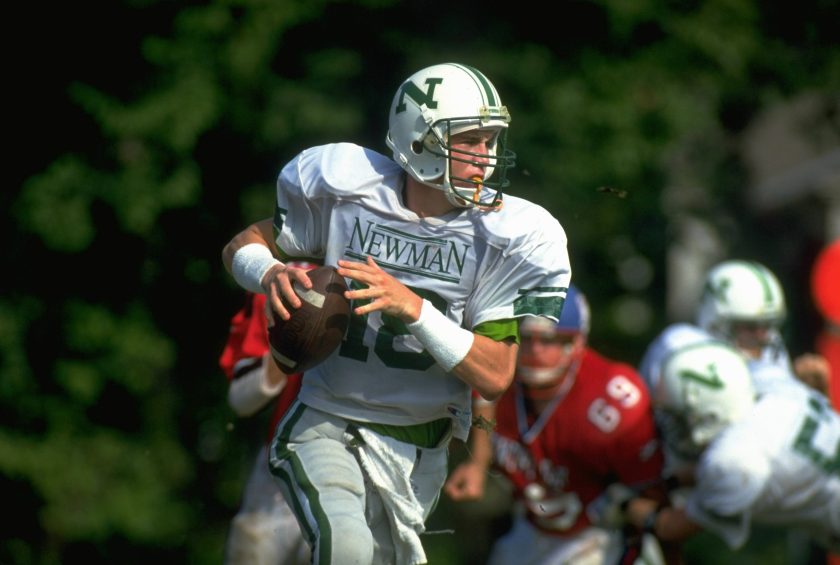 Born March 24, 1976 in New Orleans, Louisiana, Peyton Williams Manning is the son of former NFL quarterback Archie Manning and Olivia Williams. He has two brothers, Eli and Cooper, and he married his wife Ashley in 2001. They have a set of twins, a boy and girl named Marshal Williams and Mosley Thompson.

Manning was one of the most-highly touted high school football players in the country, winning national Player of the Year awards and being recruited by all of the biggest college football programs. Instead of attending Ole Miss like his father -- where his younger brother Eli Manning later broke numerous records before playing for the New York Giants -- the Isidore Newman School (where his nephew Arch is now a high school player) star chose to become a Tennessee Volunteer.

It wasn't until the fourth game of his freshman season that Manning finally found success after multiple injuries ahead of him at QB, and he earned the starting role. He wouldn't give it up for the rest of his time playing for the University of Tennessee football team. Manning still owns Volunteer records for career completions, attempts, yards and touchdowns. He finished as Heisman Trophy runner-up in 1997, and his No. 16 jersey was retired in 2005.

His Hall of Fame Career With the Colts & Broncos 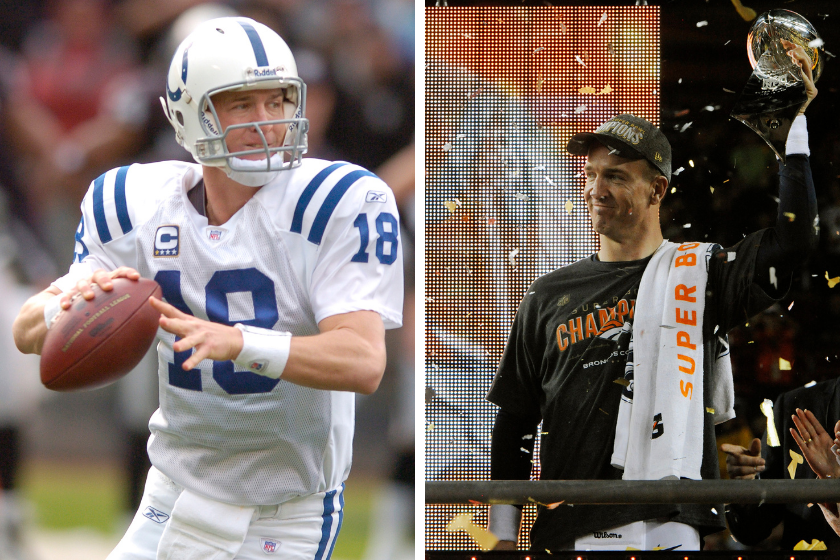 At the 1998 NFL Draft, Manning was the first overall pick of the Indianapolis Colts. His time in professional football is where he would earn most of his money and fame. As the only five-time NFL MVP Award winner in league history and two-time Super Bowl champion, Manning played 14 seasons for the Colts, where he collected a total salary of over $171 million. He defeated the Chicago Bears in a thrilling Super Bowl victory to conclude the 2006 season.

He finished out his career by signing as a free agent with the Denver Broncos after a neck injury with the Colts, playing with them for four seasons and earning another $77 million in salary. He took the Broncos to the Super Bowl in 2013 against the Seattle Seahawks, and in his final season won Super Bowl 50 against the Carolina Panthers.

Over the course of his entire football career, the American football quarterback not only became the NFL's all-time leader in passing touchdowns, passing yards and Pro Bowls (He was later passed by the ageless Brady), but at one point was the highest-paid NFL player in NFL history with career earnings of $248,732,000 in 18 seasons, according to Spotrac.

That doesn't even include all the sponsorships Manning had during and after his football career. 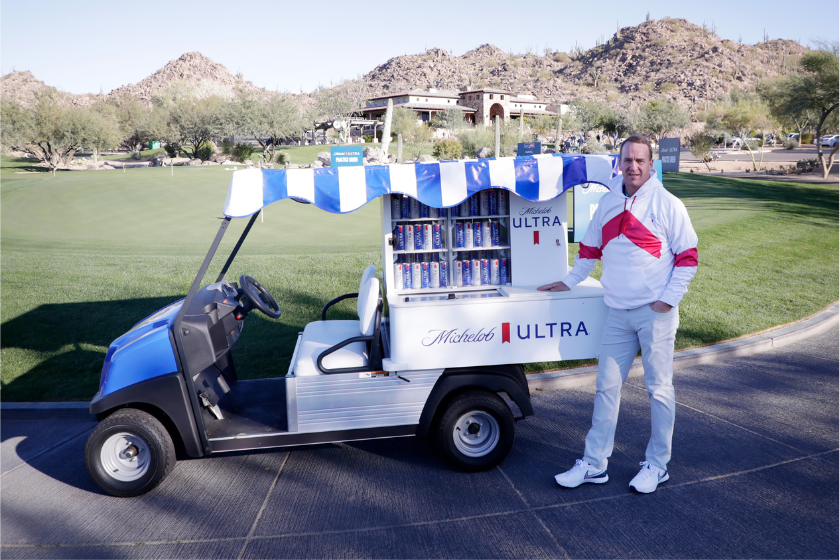 Cliff Hawkins/Getty Images for The Match

Manning has been a spokesperson for many brands over the last few decades, most notably Papa John's Pizza and Nationwide. He also signed deals with Nike, Reebok, Gatorade, Buick, Sony, MasterCard, DirecTV, Michelob Ultra and many others, earning him millions of dollars by just shooting commercials. It's estimated that Manning earned another $150 million in endorsements as of 2016, according to Forbes.

In 2015, Manning became the owner of 31 Papa John's chains in the Denver, Colorado area, but sold them once their partnership with the NFL ended.

Manning doesn't just sit on this money. He uses it for good. He and wife Ashley established the PeyBack Foundation in 1999 to "promote the future success of disadvantaged youth by assisting programs that provide leadership and growth opportunities for children at risk." It's provided more than $15 million in grants and programs since 1999. 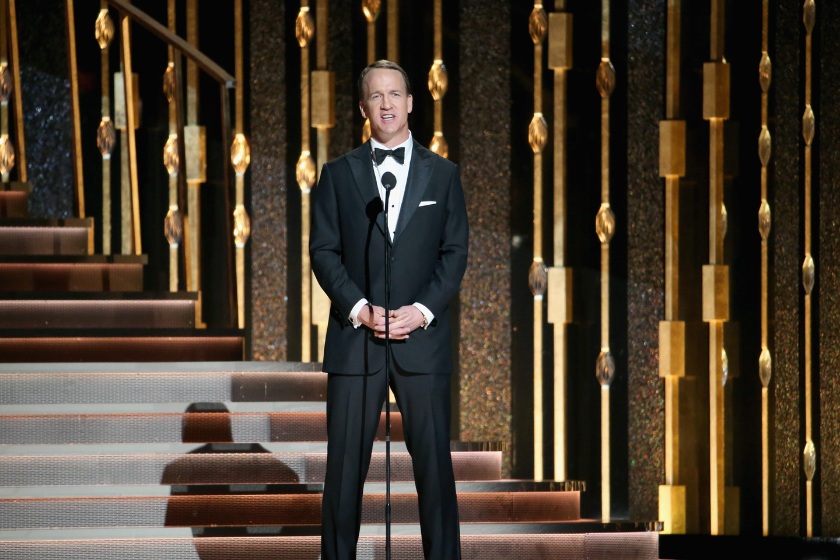 Manning took his talents to the big screen, playing the role of Guapo in the 2017 animated movie "Ferdinand." One of Manning's most enjoyable moments off the field, however, was his hilarious United Way skit on "Saturday Night Live" in back 2007.

Manning was talked about as one of the most sought after candidates to lead "Monday Night Football" and other sports coverage, especially after the success of Tony Romo on NFL on CBS, but he turned down the role on multiple occasions.

Manning's also been rumored as a potential front office replacement, following in the footsteps of former players like John Lynch (49ers) and John Elway (Broncos) who became NFL general managers.

He announced in 2021 that he'd be making his broadcast booth debut during a Monday Night Football simulcast on ESPN2 alongside his brother Eli Manning. He described it as watching the game at a bar with the Manning Brothers in what is now known as the Manning Cast/ 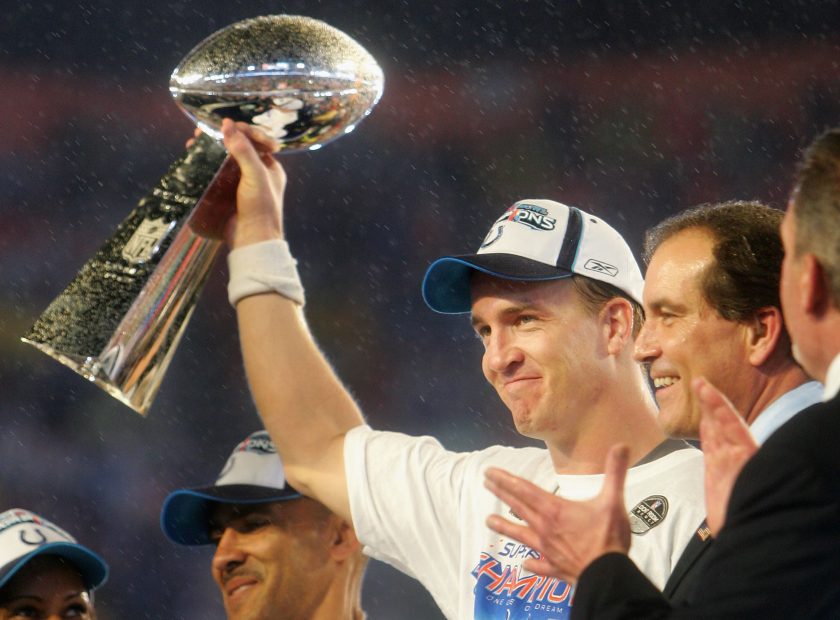 With his massive contracts as a generational football quarterback, Manning has made millions of dollars since his rookie season in 1999. But many of those years were well above $10 million in NFL salary when you include his various endorsements.

Peyton Manning has an estimated net worth of $250 million in 2022, according to Celebrity Net Worth.

Expect this number to only increase with all of the things he does outside of sports. And if the Pro Football Hall of Fame member with two Super Bowl wins and an NFL record five Most Valuable Player awards does eventually decide to completely lean into broadcasting full-time, he'll only add to his bank account.

This article was originally published on January 22, 2020.