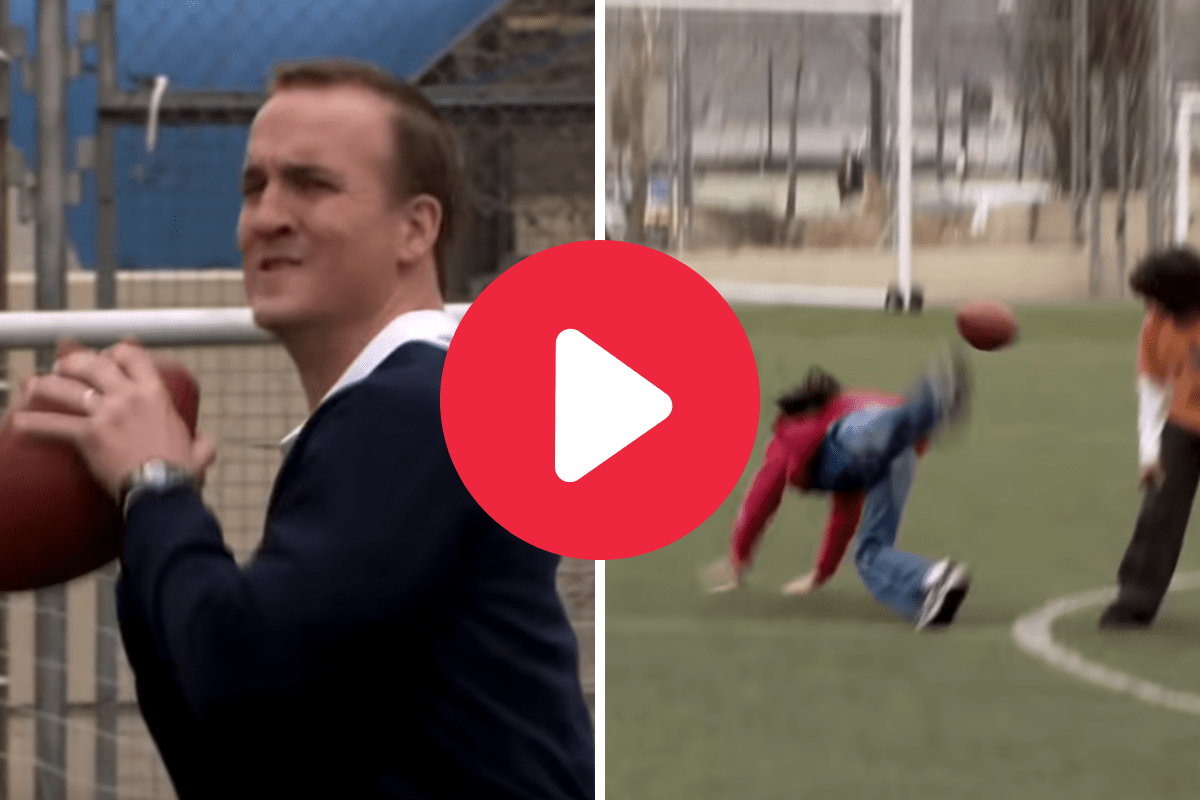 Former NFL quarterback Peyton Manning is a world-class athlete and person. The Pro Football Hall of Fame member threw for more than 70,000 and 500 touchdowns while winning two Super Bowls over his 17-year NFL career between the Indianapolis Colts and Denver Broncos.

The good thing about someone of Peyton Manning’s stature is that he doesn’t take himself too seriously. For example, he’s taken shots with Michael Phelps and Eric Church before. He’s dressed as Elvis for the NFL Films-produced “Peyton’s Places.” He and his brother Eli Manning even starred in their own rap video.

Manning has appeared in endless commercials and grew accustomed to the spotlight while playing for Tennessee in college and the Colts in the NFL. What makes the 6-foot-5 Manning so lovable is his sense of humor and goofy nature. He’s as relatable as it gets for a Hall-of-Fame NFL player.

That’s why Peyton Manning crushed it when he hosted Saturday Night Live in 2007 after winning his first Super Bowl with the Colts. Plenty of athletes have gone on the comedy sketch show, but Manning’s might be the best thanks to one skit in particular.

You know the one: The United Way Skit. That one.

The Peyton Manning-hosted 2007 ep of #SNL is so good. And Will Forte getting every person to break at some point in this sketch is just as delightful every time I watch it. pic.twitter.com/saDsulOedh

Manning and Carrie Underwood took over SNL in 2007 after the Colts beat the Chicago Bears in the Super Bowl, and they did not disappoint. The Manning family attended too — father Archie, mother Olivia and then-New York Giants quarterback Eli Manning.

Manning included a hilarious Tom Brady joke in his monologue.

“What do Tom Brady and the circus have in common? They both have two more rings than you do,” he said. You can view the entire monologue on NBC’s website here.

Manning filmed multiple sketches and skits. He dressed as a zookeeper in one and as a shirtless “300” actor in another. He even shared coffee and gossip with Kristen Wiig on a porch.

But the only one that matters, the one still memorable and just as funny years later, is the United Way Skit.

As good-natured as Peyton Manning is, he showed another dimension in this skit. Pelting kids with footballs and cursing them out? This is must-see action.

Here are some of the best nuggets and quotes from the clip:

I gotta say, these child actors do one hell of a job selling the whole thing. At first, it’s hard to believe those aren’t real footballs. Credit to the production crew for inputting the sound effects to make the nerf footballs sound like 20-pound sandbags.

Manning Nearly Backed Out Until Child’s Mom Convinced Him

Peyton Manning re-told the story of the United Way SNL skit at the Colts' Kickoff Luncheon today. (via @colts) pic.twitter.com/vZb2zWoYYA

Manning wasn’t fond of the idea at first and didn’t want to go through with it, especially with all the parents of the child actors watching him. Before he was about to back out, one mom saved the day and gave us true comedic genius.

Here’s how it played out, via the Indianapolis Colts:

“Those footballs were Nerf footballs, the Nerf cut out, and were light as a feather, and they put in these sound effects where it looks like you’re knocking these kids out. I remember the director said, ‘Peyton, you’re a charitable guy, this a spoof of the United Way, that’s why it’s going to be funny. And it’s only going to work if you’re all in. You got to whack these kids right in the head.’ And I kept saying my mother is going to be so disappointed.

These kids were all child actors, and their parents were out there watching the whole time, and it was all very awkward and uncomfortable. And I finally told the director, ‘I can’t do it, I can’t do it. I’ll go up to the edge, but this feels over the edge. I’m not comfortable’ And he said no problem, we don’t have to do it, we don’t wanna make you do something out of your comfort zone. And right then, I cannot make this up, one of the parents of the child actors runs out onto the set and tells the director, ‘I want him to hit my kid in the face!’ I said, ‘I will do it. I will knock your kid out.'”

This post was originally published on March 20, 2020, but it’s way too funny to forget.