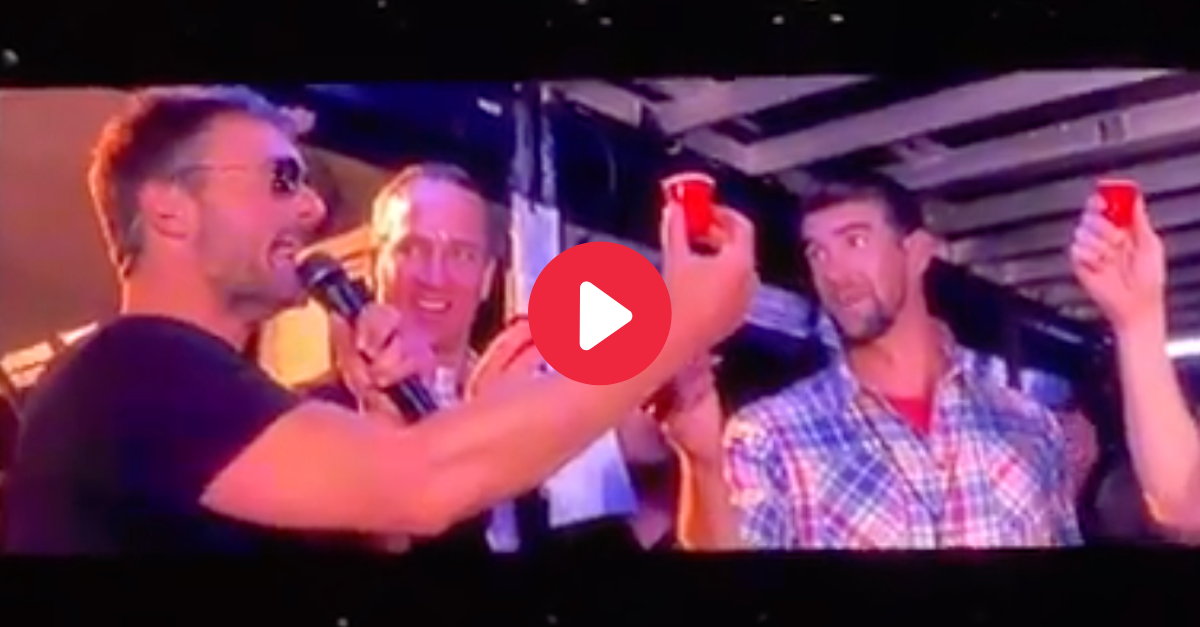 I’d pay a lot of money for a night out with country music star Eric Church. I’d pay even more money to hit the town with 23-time Olympic gold medalist Michael Phelps or legendary NFL quarterback Peyton Manning. But throwing back a shot with all three? I didn’t think it could be possible.

During Church’s show at the Pepsi Center in Denver, Colorado, the award-winning singer took a break between songs to venture backstage. Followed by a camera, Church conveniently found his way to the bar where a G.O.A.T. convention must have been taking place. The singer of “Jack Daniels” started pouring up shots of Jack Daniel’s Tennessee Whiskey, and the coolest ingestion of spirits I’ve ever seen took place.

Before we get too far, go back and watch that again. This time, keep an eye on Peyton. The Sheriff is opening his own western-style bar and restaurant in Knoxville. He attended college in Tennessee.

So, why did Peyton make a face like he hadn’t taken a shot of Jack Daniel’s since a random Saturday night in 1996?

Phelps, on the other hand, who hasn’t been a huge public figure since retiring from Olympic swimming after the 2016 Summer Games, downed that little red solo cup like the champ he is.

Peyton even used a chaser. What a horrible showing on the jumbotron for No. 18.

I’m sure they weren’t keeping score or anything, but this win was a 20-point victory for Phelps and Church over the five-time NFL Most Valuable Player.

Church played two nights in Denver and has stops in Los Angeles and Nashville upcoming in May. It’s unclear if Manning and Phelps will still be shooting JD backstage at future shows.

Lord knows Peyton could use the practice…

This article was originally published May 13, 2019. We’re still jealous of missing out on this party.