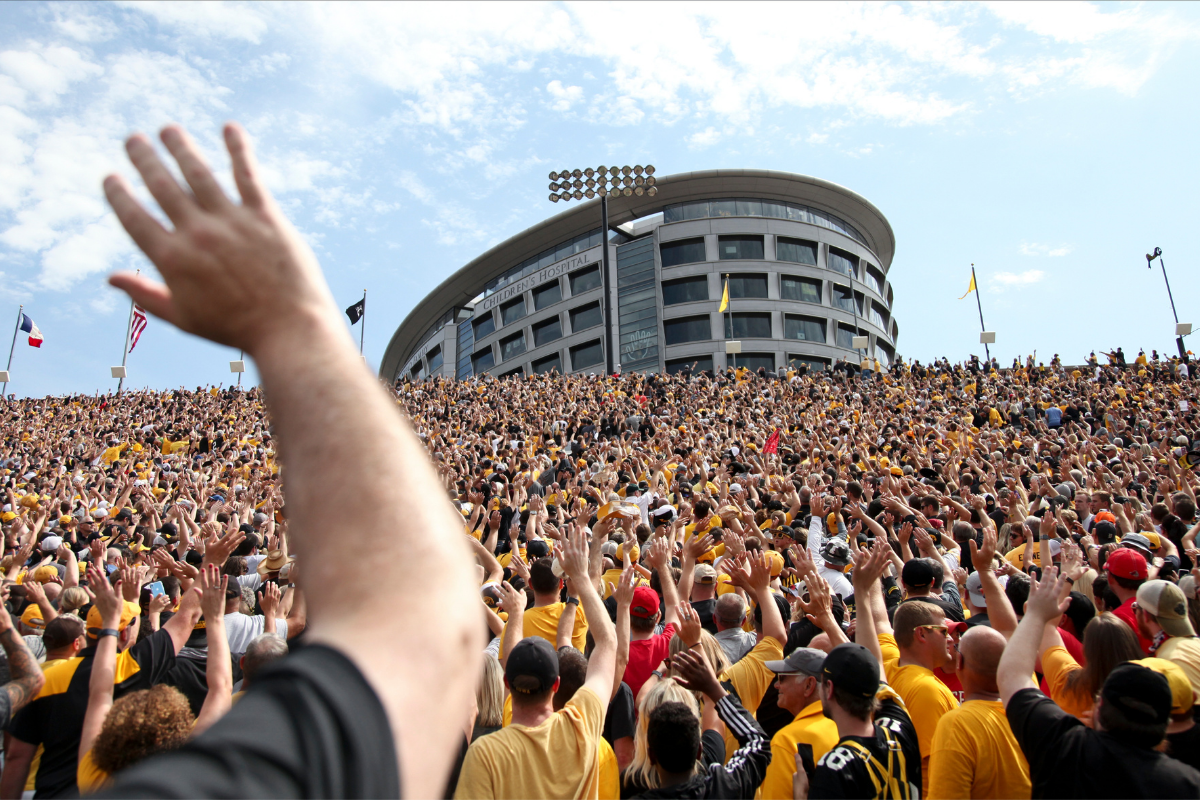 One of the greatest traditions in college football takes place at Kinnick Stadium, home of the Iowa Hawkeyes football team. Sure, there are plenty of great ones if you take a look at schools from different conferences. But none compare to the inspirational effect the Iowa Wave has.

The wave is a new tradition, only having started in 2017, but it’s touched the lives of many in its short existence.

It's been too long since we've seen this.

The Kinnick Wave has returned for @HawkeyeFootball 👋 pic.twitter.com/LsaJrYovqu

It will certainly continue to do so because it is definitely here to stay.

What is the Iowa Wave?

At the end of the first quarter of each Iowa football home game, Iowa fans and players turn to face away from the field, and begin waving in the direction of the University of Iowa Stead Family Children’s Hospital.

The hospital was constructed in 2017, and the top floor “press box” overlooks Iowa City and Kinnick Stadium, giving those in the facility’s care and their family members a chance to catch the action on game day.

There are frequently posters pressed up against the window, with children showing support to their beloved Hawkeyes during football games. The team and its fans return the favor by waving back at the children in a touching gesture.

Who Started the Iowa Wave?

The idea for the wave was actually developed on social media, as one fan suggested the team try to do something to cheer up the kids in the hospital, per ESPN. The wave made its debut in 2017 during the Hawkeyes’ home opener against Wyoming. UI’s announcer requested all 70,000 fans in attendance turn to the hospital and make the friendly gesture.

From that moment on, it’s become an NCAA staple at home games for the Big Ten squad. While the 2017 season wasn’t particularly memorable for the football team, they did treat fans at Kinnick Stadium to a dominant win over Urban Meyer and Ohio State. The wave returned in 2021 when Iowa took on Indiana, and it was nothing short of awesome.

Opposing teams have also taken part in the wave. Minnesota head coach P.J. Fleck was a big fan of the idea, having had lost a son to a congenital heart defect.

With other teams and coaches getting in on the heartfelt tradition, the Iowa Wave looks set to capture the hearts of Iowans, Hawkeye fans and college football fans for many years to come.