Archie Griffin is a college football legend. The former Ohio State Buckeyes running back is the only two-time Heisman Trophy winner in NCAA history. If they were to remake the award using a new player, Griffin seems like an obvious choice.

While he appeared to be in line for a successful NFL career, his fortunes quickly turned. Griffin had a bright future in football, but things never panned out, and the former OSU superstar ultimately went bankrupt before the age of 30.

So, where is Archie Griffin now? 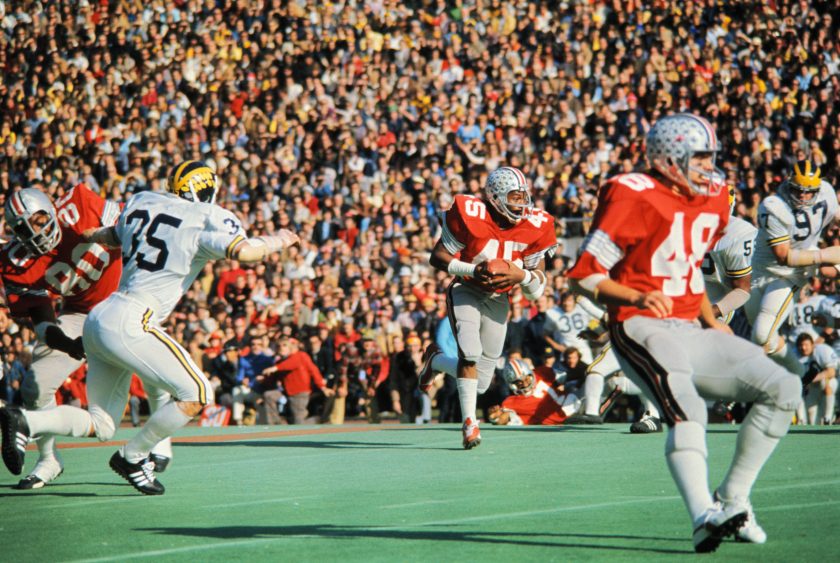 Archie Griffin played fullback in high school at Eastmoor Academy in Ohio before taking his talents to Ohio State University and play for head coach Woody Hayes. He was strongly considering attending Northwestern before being lured to Columbus.

After two impressive seasons as a freshman and sophomore, Griffin truly took off as a junior. He rushed for 1,695 yards and 12 touchdowns in 1974, helping lead the Buckeyes to a joint Big Ten title with Michigan and won his first Heisman Trophy.

In 1975, Griffin racked up 1,450 rushing yards and became the first player to win a second Heisman Trophy after beating out Chuck Muncie and Ricky Bell in the Heisman voting, despite logging just four rushing touchdowns. 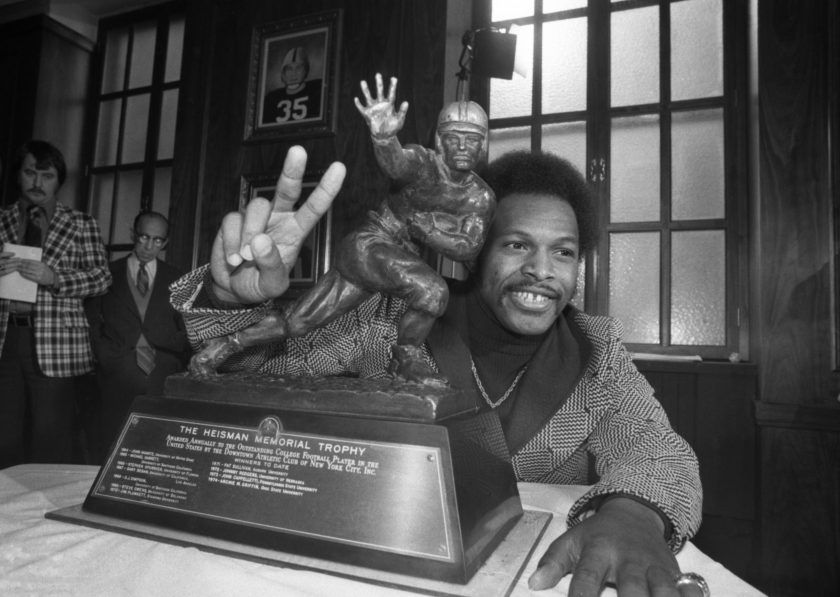 Archie Griffin of Ohio State holds up two fingers as he poses with the Heisman Trophy after he was named winner of the coveted bronze trophy for the second time in a row. Griffin is the first and only player ever to win the trophy twice. (Photo by Bettmann Archive/Getty Images)

He was a three-time Consensus All-American and was also named the Big Ten's MVP twice. Additionally, he was named United Press' Player of the Year in 1974 and 1975. Griffin is also the first player ever to start in four Rose Bowl games, having featured in the game against USC three times.

At the end of Griffin's college career in Columbus, he held the NCAA record for career rushing yards and was considered one of the greatest college football players ever. He still is, depending who you ask. The star tailback was inducted into the College Football Hall of Fame in 1986. 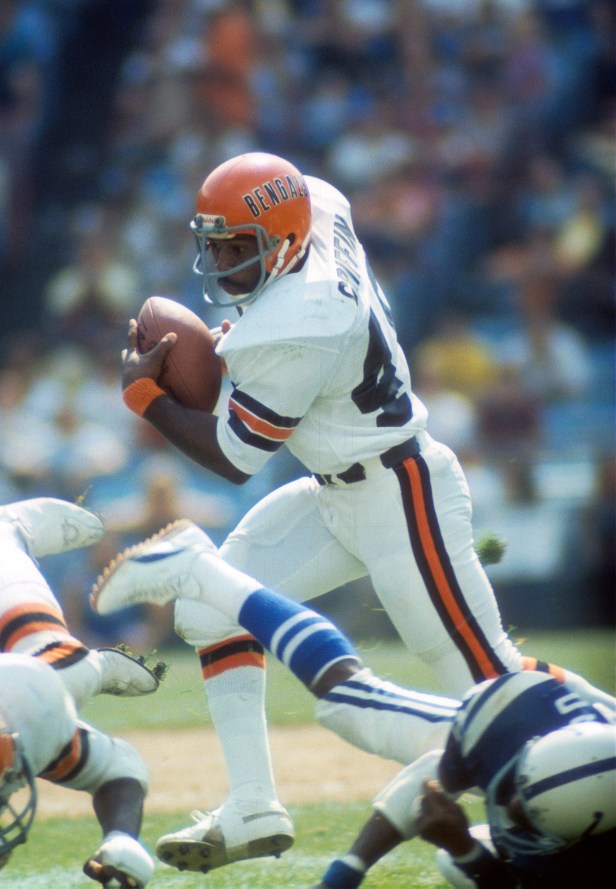 BALTIMORE, MD - SEPTEMBER 19: Archie Griffin #45 of the Cincinnati Bengals carries the ball against the Baltimore Colts during an NFL football game at Memorial Stadium September 19, 1976 in Baltimore, Maryland. Griffin played for the Bengals from 1976-82. (Photo by Focus on Sport/Getty Images)

Archie Griffin declared for the 1976 NFL Draft after his senior season and was a lock to be a first round pick after his dominance in college. The Cincinnati Bengals selected him with the 24th overall pick with the hopes of him being a professional football star, too.

His career as an NFL player was far less successful, however. He managed just three touchdowns as a rookie, and failed to score in his next four seasons in the league.

Griffin played in the 1982 Super Bowl, though he was merely a utility tailback by that point. He was out of football by the time he was 28 after failing to find his footing in the league. 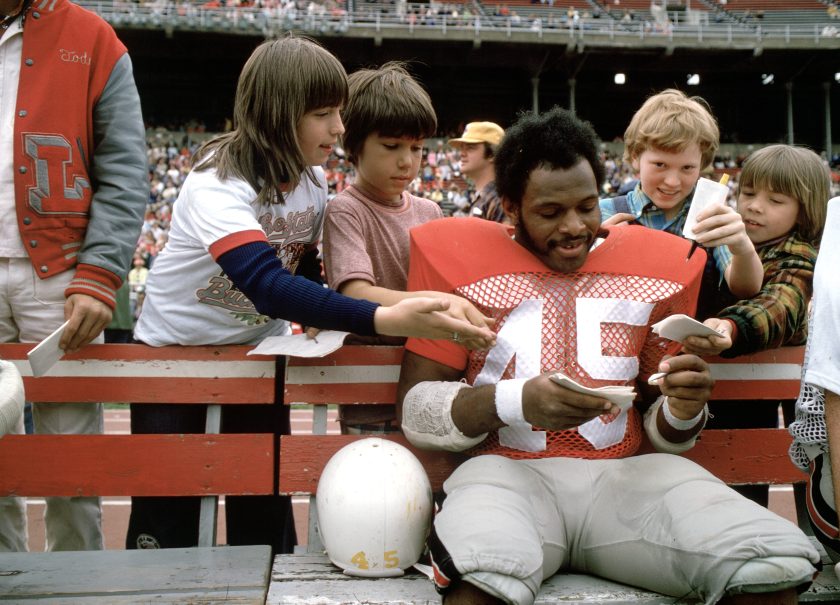 Archie Griffin had some financial woes during his playing career, even filing for personal bankruptcy after some failed business ventures.

According to archived New York Times articles, he and his brother, Ray Griffin, who also played at Ohio State, and other members of the Bengals, "filed for personal bankruptcy after a three-year venture, involving six athletic shoe stores, failed." They reportedly had debts of more than $500,000 at the time.

"I guess you can say I'll be quite conservative in the future. I won't go into a business until I can be there and run it," Griffin told the New York Times in 1982. 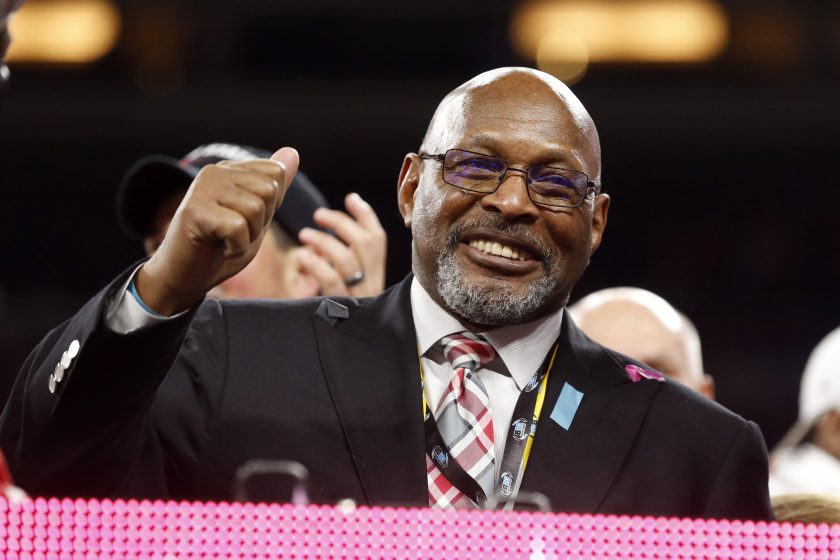 Griffin served as the program's Associate Athletic Director, as well as the CEO of the Ohio State University Alumni Association for 11 years. Griffin was then a senior advisor for the Ohio State Office of Advancement and still attends the Heisman Trophy ceremonies in New York.

He's since retired and admits he hits the links a ton.

"Retirement has been fun," he told ABC6. "You asked what I've been doing, and I'll be honest with you, I've been playing a lot of golf. I'm trying to get better at the game."

In the meantime, Archie can find solace knowing his family is involved in the game. He has a son, Andre Griffin, who is an assistant football coach at Ohio Northern University, and played at Ohio State.

On Thursday?s show we welcome Andre Griffin to talk about growing up as the son of only 2-time Heisman winner Archie Griffin. We also welcome back celebrity correspondent & #LSU fan @vanlathan to talk music and the fight w/OSU to claim Burrow. Also will talk to @CoachZachSmith ! pic.twitter.com/zq8sbXYH0v

Then there's Archie's grandson, Dianté Griffin, who walked on at Ohio State and is on the 2022 roster. The 5-foot-8 cornerback joined the program in June 2022.

Archie Griffin will always be a college football and Ohio State legend for winning two Heisman Trophies. It's good to see him doing well these days.

MORE: What Happened to Texas Star Vince Young and Where is He Now?