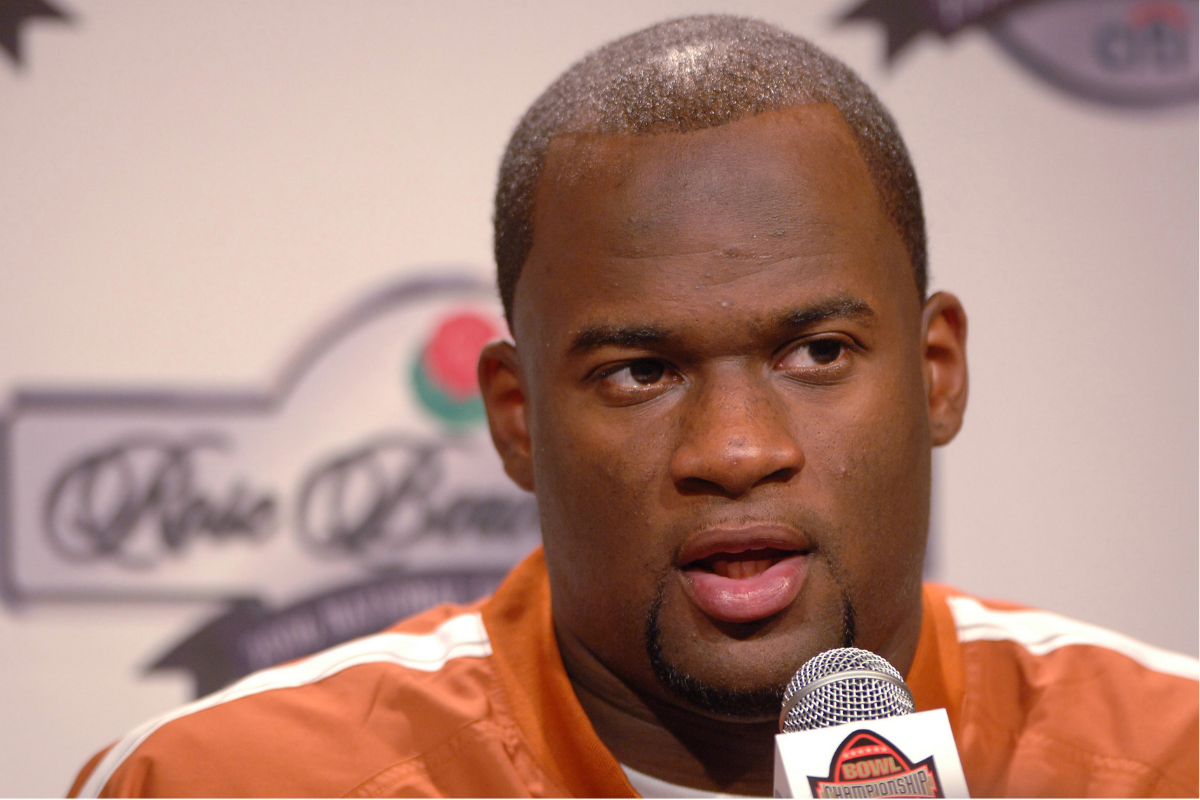 Like many individuals before him, Vince Young was drafted to the NFL with the expectation that he’d flourish into a superstar. He had all the tools, was a gifted athlete, and seemed to revel in the spotlight.

Despite all he had going for him, Young could never quite figure things out as a professional football player and was out of the league after less than six seasons of service.

While his NFL career didn’t pan out as expected, Young is moving on with his life and focusing on the present rather than the past.

So, what is the former Texas Longhorns star doing these days?

Vince Young grew up in Houston, Texas, where he was raised by his mother, Felicia Young, and his grandmother. His father was absent for much of his childhood while serving out a prison sentence for a burglary conviction.

After his stellar high school career, Vince Young took his talents to Austin to play quarterback for the University of Texas under head coach Mack Brown.

As a redshirt freshman in 2003, Young was splitting snaps with fellow Longhorns QB Chance Mock. On the year, Young threw for 6 touchdowns and 7 interceptions while rushing for 998 yards and 11 touchdowns.

He stepped into the spotlight in 2004, taking the starting quarterback position for himself. Young led the Longhorns to an 11-1 record and a Rose Bowl victory. That season, Young rushed for over 1,000 yards and 14 touchdowns. Via the air, Young tossed 12 touchdowns and 11 interceptions.

The 2005 campaign is when Vince Young truly cemented his legacy at the University of Texas and in college football history. Young and the Longhorns went undefeated during his redshirt junior season and earned a ticket to the BCS National Championship Game, a Rose Bowl matchup against the USC Trojans.

In what was one of the most enthralling football games in history, Young accumulated 467 total yards and scored three touchdowns, including the game-winning touchdown run with 19 seconds left in the fourth quarter to lift the Longhorns over the Trojans.

The national champion was named 2006 Rose Bowl MVP for his performance, capping off his prolific season that saw him finish runner-up for the Heisman Trophy, behind USC star running back Reggie Bush.

The Houston kid's first visit home as an NFL quarterback.

And Vince Young capped it off in spectacular fashion.

Quarterback Vince Young was a hot commodity heading into the 2006 NFL Draft, and he was scooped up by the Tennessee Titans in the first round with the third-overall pick. He got off to a decent start to life in Nashville and was named the 2006 Offensive Rookie of the Year and earned a Pro Bowl nod after throwing 12 touchdowns and 13 takeaways while rushing for 552 yards and seven scores. The Titans went 8-5 in his 13 starts that year, but finished 8-8 overall and missed the playoffs.

For all that Young was as a mobile quarterback, he lacked as a pocket passer. In his second year in the league, that was on full display.

Young threw just nine touchdown passes in 2007 and was picked off 17 times. He was less effective on the ground as well, recording just 395 yards and three touchdowns. Young and the Titans snuck into the playoffs in the AFC after defeating the Indianapolis Colts in Week 17, but were ousted in the first round by the Chargers.

After missing most of 2008 with a knee injury and subsequent benching in favor of Kerry Collins, Young was named the 2009 Comeback Player of the Year and earned his second Pro Bowl bid after leading the Titans to an 8-2 record across 10 starts.

In 2010, Young suffered an injury to his right thumb during a Week 11 clash against the Washington Redskins. Head coach Jeff Fisher opted to keep him on the sideline rather than bring him back into action.

After the game, Young and Fisher reportedly got into a heated altercation and the quarterback was benched. He was released in early January 2011.

After his release from the Titans, Young bounced around to the Philadelphia Eagles, Green Bay Packers, Buffalo Bills and Cleveland Browns but never managed to find a long-term home.

He played his last snap in the NFL as a member of the Eagles in 2011.

After officially retiring from football in 2014, Young returned to Austin, working at the University of Texas in its Division of Diversity and Community Engagement. He held that role until 2019 when he was fired by the university for repeated absences and poor job performance.

In January 2014, Vince Young filed for Chapter 11 bankruptcy, despite the lofty earnings he made in his NFL career and through endorsements. Young made over $35 million as an NFL quarterback, and had lucrative endorsement deals with companies like Reebok, Campbell’s Soup, Vizio and was even a cover athlete for EA Sports’ Madden 08.

Young has been arrested twice since his retirement, the first for a DWI in Austin in 2016 and the second for a DWI in Fort Bend County in 2019.

In 2017, Young tried to mount a football comeback, signing a contract with the Saskatchewan Roughriders in the CFL. Young sustained a hamstring injury during training camp in the offseason and was waived shortly after.

Young’s retirement life has had its ups and downs, but nowadays the former quarterback is just trying to make sure his story is told.

Young recently sat down with ESPN‘s Scott Van Pelt and revealed he had both a book and documentary about his life in the works, as he aims to tell his story from his perspective.

MORE: Knowshon Moreno Made $20 Million in the NFL, But Where Is He Now?