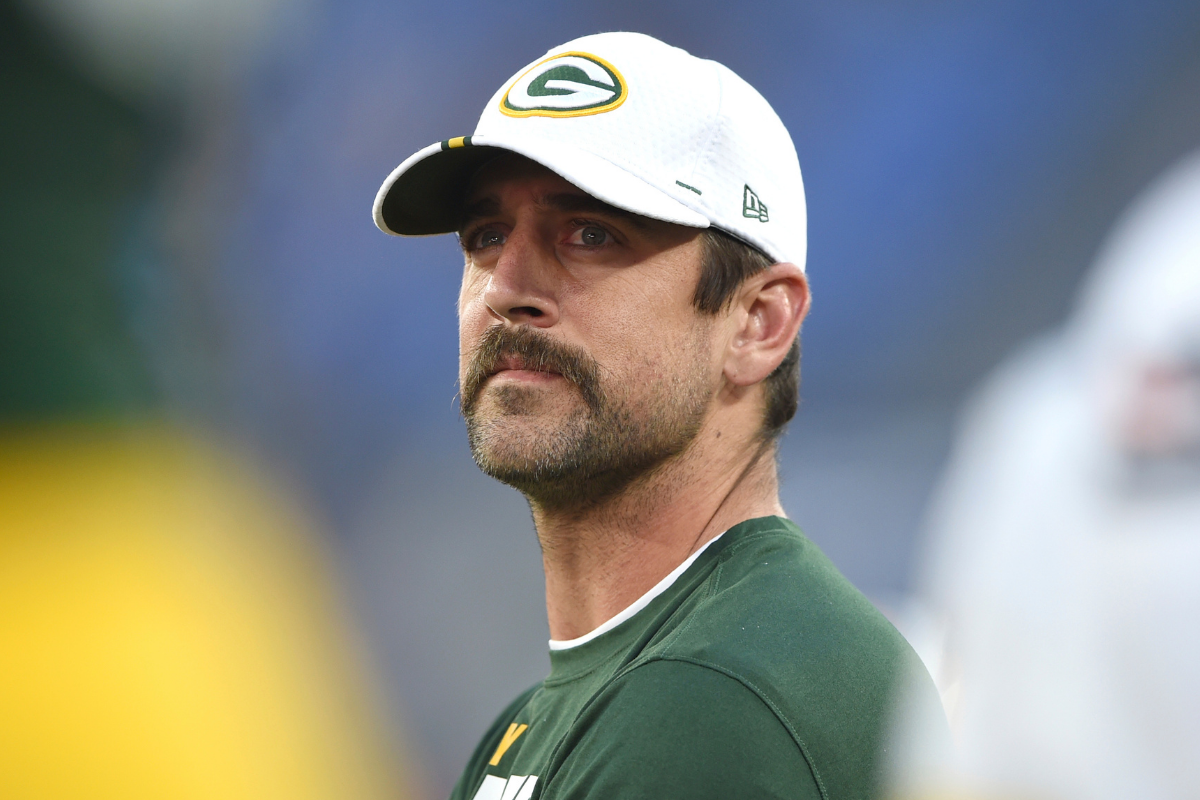 When it?s all said and done, Aaron Rodgers will be remembered for his heroics on the football field as a member of the Green Bay Packers.

Rodgers’ No. 12 jersey will hang proudly at Lambeau Field after his retirement, and his arm strength will be discussed in Packers? lore. However, that?s not all that will be discussed as part of Rodgers? legacy in Wisconsin.

Any Aaron Rodgers anecdote would be sold short without mentioning the gunslinger?s facial hair, which he loves to experiment with during the offseason and preseason, showing up to the Packers’ Welcome Back Luncheon with a bold new look each year.

When questioned about the inspiration for his bold facial hair, Rodgers identified three people who stimulate his desire to grow a recognizable mustache; his father, Tom Selleck and Sam Elliott.

The stache is back.

Green Bay Packers quarterback Aaron Rodgers entered the NFL as a clean-shaven 21-year-old, serving as backup quarterback to Brett Favre. The only facial hair he had on draft day was a tiny soul patch

Since then, however, Rodgers has experimented with a plethora of facial hair stylings, many of which have caught the attention of fans and media members.

Just a little #tbt to 15 years ago when I was quarantined in the green room at the @javitscenter for a few hours 😂. Turned out pretty good I’d say @packers #greenroomdistancing #hairgel #flattenthehair #spikes #soulpatch #flipphone #midrange #24 #nfldraft #

Rodgers served as Favre?s backup for the first three seasons of his career, and it was during his time on the bench that fans began taking notice of his facial hair. Rodgers? mustache was more famous than he was by the time he took over as starting quarterback in Green Bay.

Just check out this stache from his days on clipboard duty, via Pinterest.

Fast forward to 2008 and Rodgers is donning arguably the boldest look of his entire playing career. Yes, Packers fans may have forgotten, hell, Rodgers? ex-girlfriend Danica Patrick may even have forgotten, but 2008 was the year of Aaron Rodgers’ long hair.

Instead of sporting his typical short haircut, Rodgers showed up to camp in 2007 with his brown hair nearly reaching shoulder length accompanied by some facial stubble.

At the height of Rodgers? career in 2010, Aaron was actually clean shaven. The beardless Rodgers helped guide the Packers to win the NFC North, earn a playoff berth, and win both the NFC Championship against the Chicago Bears as well as the Super Bowl against the Pittsburgh Steelers.

While maintaining a clean shaven face could have crossed his mind after such a successful campaign, Rodgers returned to training camp for the 2011 regular season with a very cowboy-esque appearance, sporting a complete horseshoe stache.

Rodgers pulled off the look so well that I’m surprised Jerry Jones didn’t call to recruit him to the Dallas Cowboys.

Aaron Rodgers rocked the outlaw look at today's Welcome Back #Packers luncheon. He also did so 2 years ago. pic.twitter.com/HxQOZxxi

Things only got crazier from that point.

In 2016, Rodgers returned to the Packers? annual Welcome Back Luncheon ahead of the regular season sporting his boldest outfit and facial hair pairing yet. Rodgers looked like he just came from the set of a Western, and his handlebar mustache was the talk of Green Bay, and the NFL world.

In 2017, Rodgers showed support to the ‘Movember’ campaign, a month-long campaign in which people don’t shave their facial hair in support of men’s issues.

Well, to say Rodgers stole the show with his mustache on social media is an understatement.

The number of men with prostate cancer will double in the next 15 years, and I’m making moves on #GivingTuesday to change that. Check out us.movember.com to get involved. @Movember #Movember #mustache #samelliottisalegend

Come 2018, Rodgers may as well have hung up the cleats and gone to live out on a ranch. He went full out Westerner with his appearance for the Packers Welcome Back Luncheon, and it’s honestly not bad look on the former first-round pick.

Big thank you to @levis and @heymarkavery for helping me with my all denim look today for the annual Packers Welcome Back Luncheon. The tux jacket was a replica of one made for Bing Crosby in 1951. Thanks to Deshone and Tim for joining in and Matt Flynn made me post the pic of him and I in the Canadian tuxedo from years ago so you all knew that this was a repeat outfit. Thanks @mflynn3. Lastly, thanks to genetics that allow me to grow a mustache that even a hero of mine, Sam Elliott, might be proud of. #denim #levis #mustache photo credit: @fatheadklein

Last year was a similar look for Rodgers, who continued to stand united with his upper lip and rock a thick mustache once again.

While Rodgers has showcased a plethora of incredible looks, some of which have generated memes, none compare to the Packers QB’s infamous quarantine beard.

While barber shops were closed during the national pandemic, Rodgers was left with no choice but to go full caveman. When he showed off his look with an Instagram pic, the result was truly shocking.

I’ve accepted the #ALLINCHALLENGE go to http://bit.ly/AaronRodgersAllIn to participate in my once in a lifetime experience up in @Packers country and help feed the hungry in these challenging times! Oh yeah, and I challenge @CP3, @max.homa and @taeadams to be #ALLIN too #allinthistogether

Rodgers is 36 years old now, and unless he plans on pulling a Tom Brady and playing through his mid-40s, his career may be winding down.

Everyone from teammates, fans, media members and even Packers head coach Matt LaFleur can only hope to see some more wild mustaches from Rodgers throughout his final NFL seasons as the leader of the Packers football team.