There's no denying the significance of winning an MVP award. In college football, however, it just means more.

College football's greatest individual award is given to the most outstanding player in the sport. MOP doesn't have the ring that MVP has, but the Heisman Trophy has a prestige no other award can match.

Eighty-six of the greatest college football players have taken home the award, and yes, I'm including Reggie Bush. There's no denying every winner deserved it one way or another. There are some who are more memorable than the rest, though, and some who went from being on top of the college football world to NFL busts.

Worst is an arbitrary word, so for these particular rankings I'm defining it as "Oh yeah, that guy won the Heisman," because you probably forgot about them after they hoisted the award in New York City. These guys either controversially won over someone who deserved it more, completely disappeared after their college guys, didn't live up to the hype in the NFL or all of the above.

Just in case you need a refresher, let me help you remember the 10 worst Heisman winners. 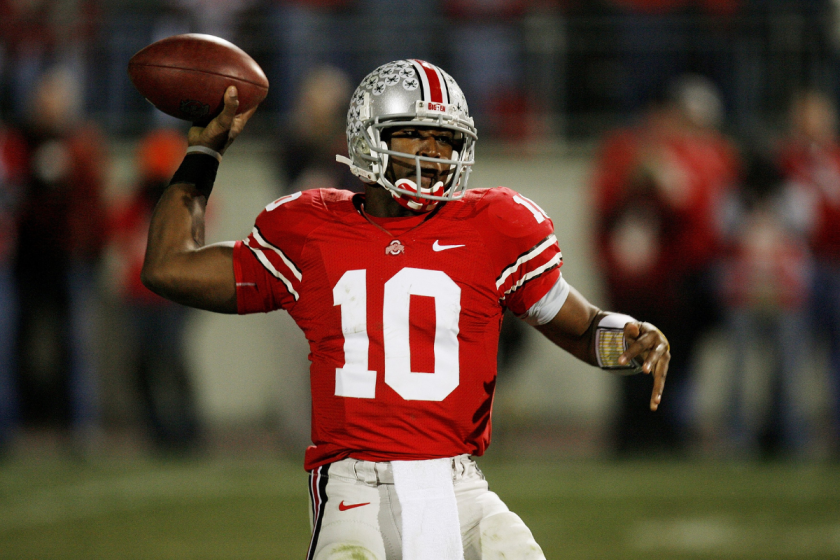 Ohio State quarterback Troy Smith won the 2006 Heisman Trophy by a landslide over Arkansas' Darren McFadden and Notre Dame's Brady Quinn. Smith threw for 2,542 yards and 30 touchdowns against only 6 interceptions en route to leading the Buckeyes to a perfect 12-0 record. OSU ended up getting smashed by Urban Meyer's Florida Gators in the national championship game, which can be pinpointed as the moment things started trending downward for the star QB.

Smith spent most of his four-year NFL career as a backup for the Baltimore Ravens. He went .500 as a starter, which is roughly the same chance he had at completing a pass. 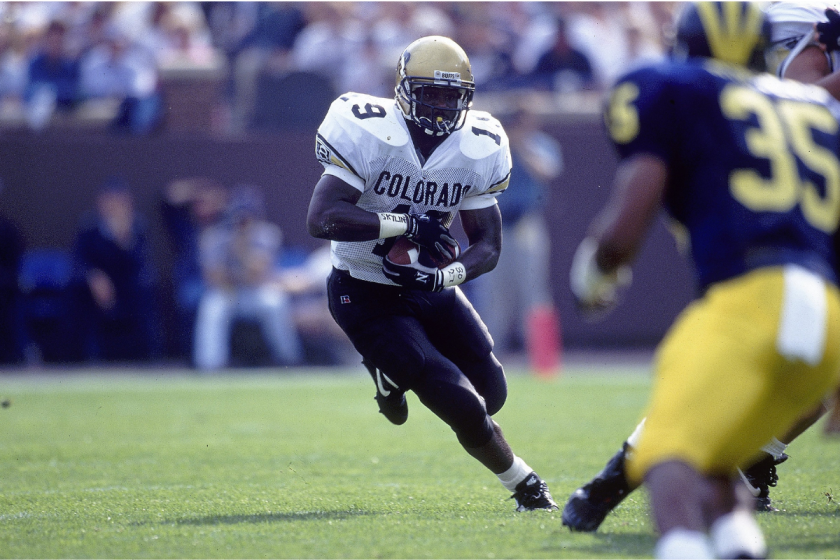 Salaam's 1994 Heisman season is an all timer. The Colorado running back rushed for 2,055 yards and 33 touchdowns, making him an easy choice for the best player in college football.

The Chicago Bears took the stud halfback with the 21st overall pick in the 1995 NFL Draft, and his pro career actually got off to a good start. The first round draft pick became the youngest player in NFL history to rush for over 1,000 yards at the time when he ran for 1,074 as a rookie.

From that point on, his career was plagued with injuries, fumbles and marijuana use. He was out of the league by 1999 and tragically passed away at the age of 42 in 2016. 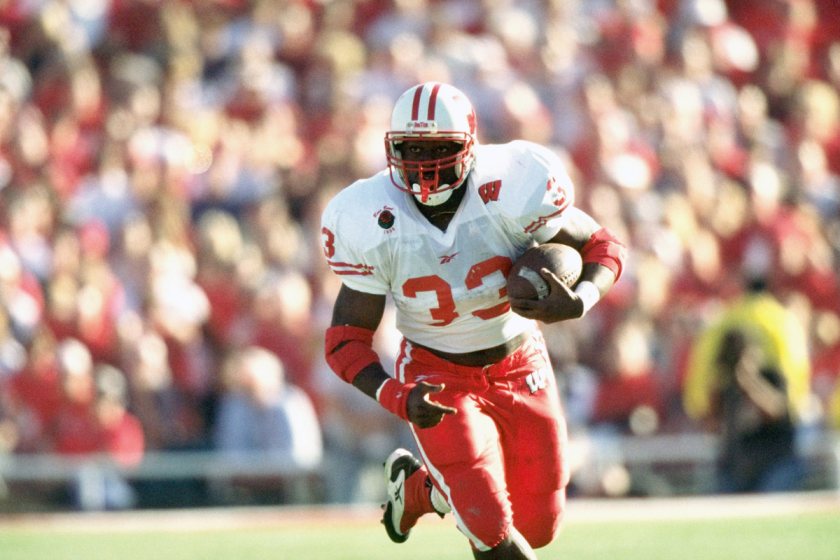 Running back Ron Dayne was an absolute beast at Wisconsin. He ran for 7,125 yards, which is good for the number one spot on the NCAA career rushing yards list, and eclipsed the 2,000-yard season mark twice. He bulldozed his way into the end zone 71 times during his four-year career in Madison, too.

The New York Giants selected Dayne with the 11th pick of the 2000 NFL Draft banking that his running style would demolish pro defenses. It didn't. Dayne's workload decreased each year and he never cracked 1,000 yards in a season. He was out of the league by 2008. 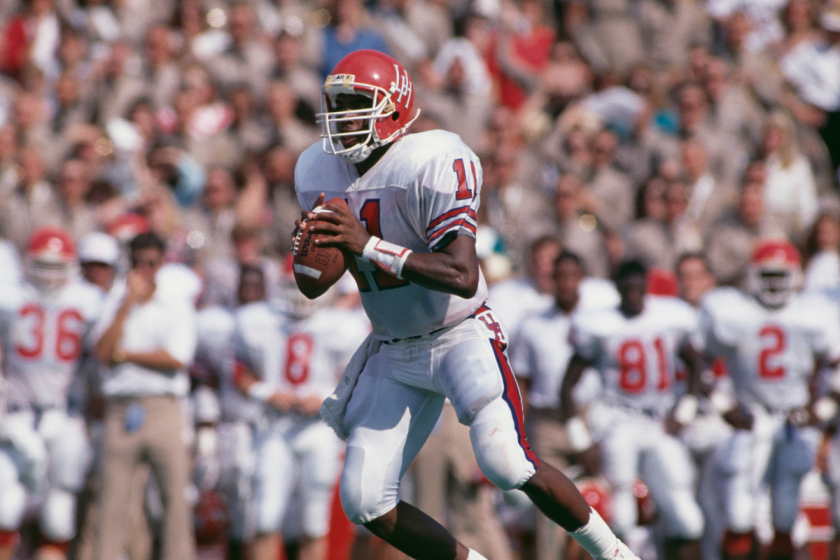 Houston quarterback Andre Ware threw for a modest 4,699 yards and 46 touchdowns during his 1989 Heisman winning season.

Ware chose to forgo his senior year and enter the NFL Draft where he had the privilege of being selected seventh overall by the Detroit Lions. He threw for 1,112 yards and five touchdowns against eight interceptions in his four-year pro career, which didn't thrill too many Michigan NFL fans. Think how bad you have to be for Lions fans to be sick of seeing you on the field. 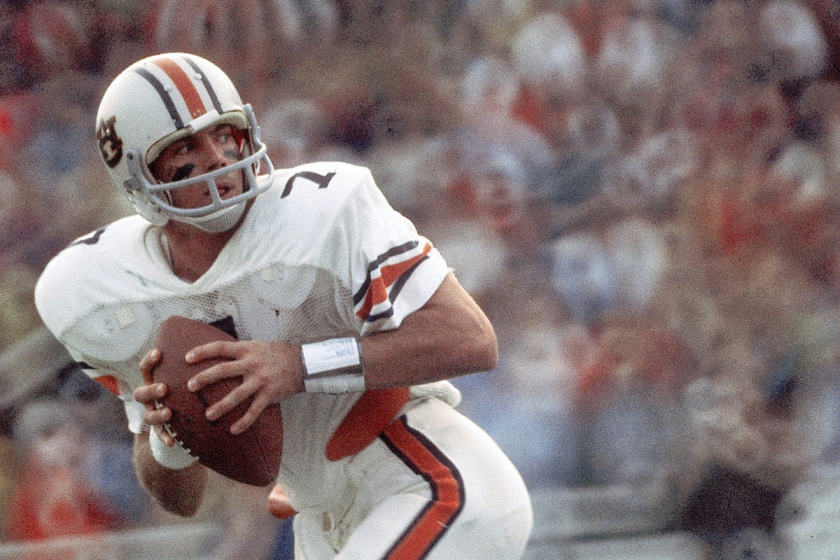 All Auburn quarterback Pat Sullivan did during his college career was throw for 6,534 yards and 54 touchdowns while leading the Tigers to a 26-7 record.

Sullivan couldn't find a rhythm on the Atlanta Falcons and Washington Redskins. His five career touchdown passes came at the expense of 16 interceptions while his teams went 0-4 in games he started. Not to mention, Sullivan's career QB rating was an ugly 36.5. 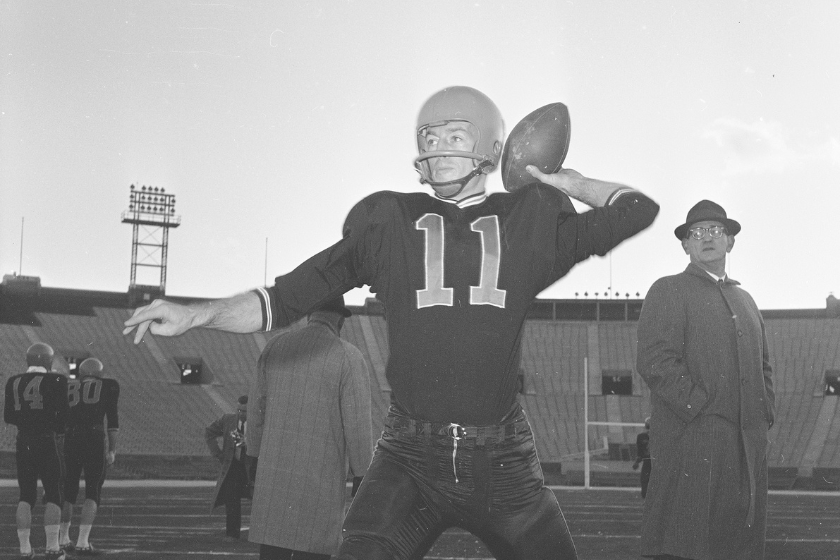 Oregon State quarterback Terry Baker passed for 1,738 yards and 15 touchdowns and ran for 538 yards and nine scores during his Heisman season in 1962. Baker's dual-threat abilities were attractive enough for the Los Angeles Rams to select him No. 1 overall in the 1963 NFL Draft. The Rams would soon regret their decision.

Baker completed 11 total passes for 140 yards during his pro career as a signal caller. In an effort to save his career, the Rams switched him to wide receiver, but that didn't work out either. He had 30 catches for 302 yards in 18 appearances over his three-year NFL tenure, making him the first true Heisman bust. 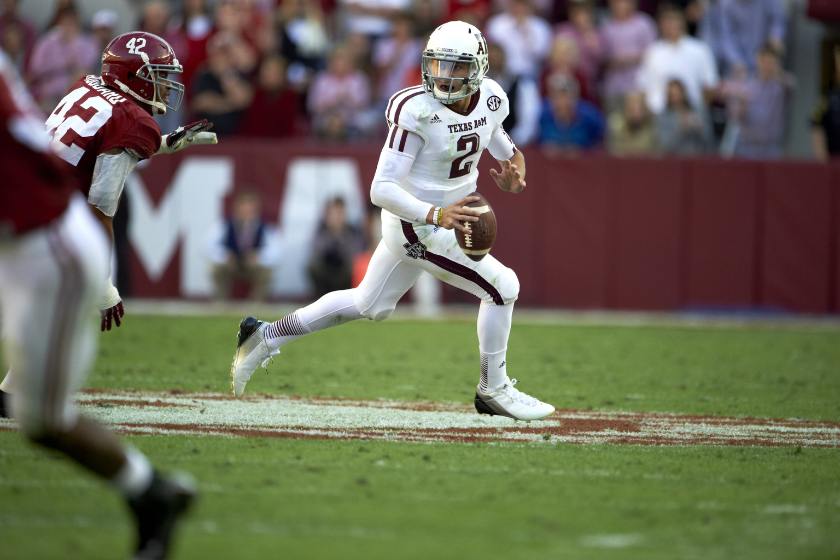 I loved watching Johnny Football play in 2012. He was electric, he was chaotic, and of course, he went into Tuscaloosa and beat the mighty Alabama Crimson Tide as a first-year starting quarterback. Not only did Manziel lead the Texas A&M Aggies to a win over the top-ranked team in the land -- a performance chock-full of Heisman moments -- he threw for 3,706 yards and 26 touchdowns while rushing for 1,410 yards and 21 touchdowns for the season. Not bad for the first freshman to ever win the Heisman.

Where do I begin from there? Manziel busted out of the NFL after being selected in the first round by the Cleveland Browns (It's hilarious the Browns thought Manziel would be the one to lift them out of their sad but hilarious quarterback funk). He then played in the CFL with the Hamilton Tiger-Cats and Montreal Alouettes before short stints with the Memphis Express of the Alliance of American Football and the Zappers of Fan Controlled Football. However, he never came close to playing at the level he played at Texas A&M. He may be most known for making headlines off the field for the wrong reasons throughout his time in the spotlight.

Manziel is one of those guys you either love or hate. Outside of College Station, a lot of people lean towards the latter. 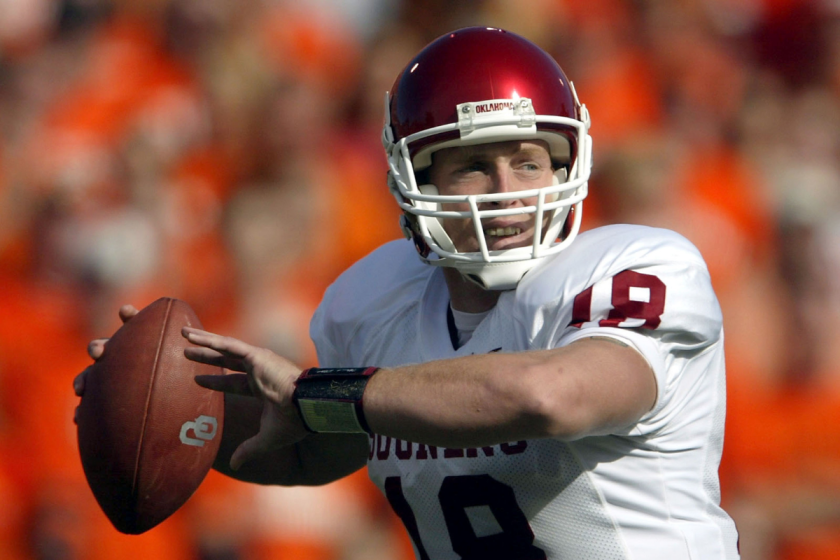 Jason White was a dynamite pocket passer for the Oklahoma football team. He led the Sooners to two consecutive national championship appearances and ranks fourth on the program's all-time passing yards list. His six years in Norman felt like a decade and a half to opposing fans. In fact, he might still have a redshirt left.

White may have had a great college career, but he went undrafted and never took a snap in the NFL. 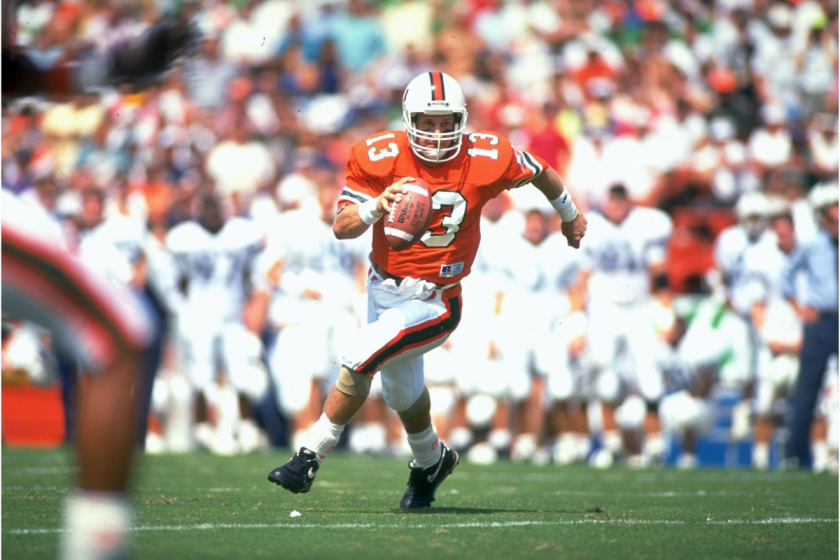 Gino Torretta's college career wasn't bad. He only won two national championships and threw for 3,060 yards on his way to the 1992 Heisman Trophy. But, he controversially won the award over San Diego State sophomore running back Marshall Faulk, who rushed for 1,630 yards and 15 touchdowns. Anyone who watched college football that year saw Faulk was the superior player. However, voters weren't ready to see an underclassmen Heisman winner just yet, and Torretta quarterbacked the one of the country's top teams. That'll get you a healthy amount of votes by default.

Despite his college success, Torretta fell to the Minnesota Vikings in the seventh round of the 1993 NFL Draft. Torretta didn't see the field until jumping from the Vikings to the Detroit Lions to the San Francisco 49ers and finally to the Seattle Seahawks, where he completed five of 16 attempts for 41 yards, a touchdown and an interception. Those are his complete NFL stats. 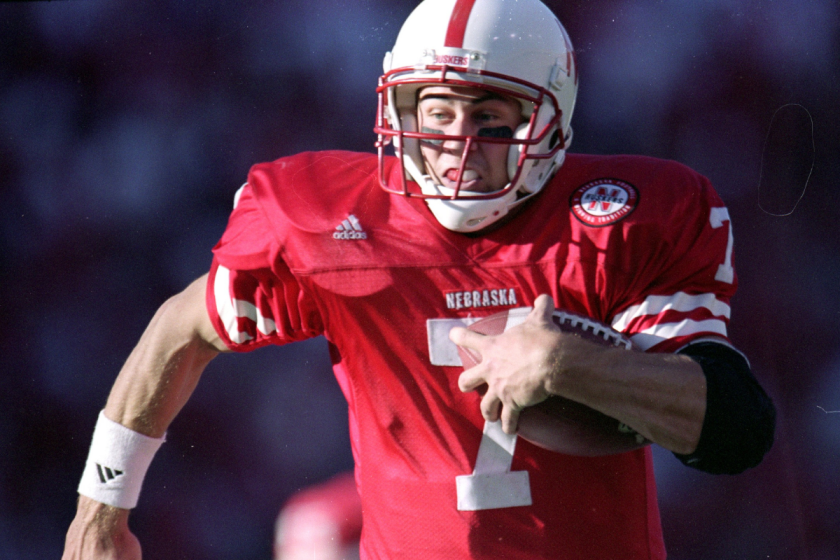 Nebraska's Eric Crouch was the definition of a dual-threat quarterback. He ran for 1,115 yards and 18 touchdowns while throwing for 1,510 yards and seven touchdowns during his Heisman season. However, he beat out Florida quarterback Rex Grossman by a mere 62 votes in one of the closest races in Heisman history. Crouch had his Heisman moments -- like his famous touchdown catch against Oklahoma and beast-mode run against Iowa -- but the trophy could've just as easily been Grossman's or third-place finisher Ken Dorsey's.

As a Nebraska fan, we caught two breaks in 2001. The first was earning a spot in the national championship game even though we lost badly to Colorado in the regular season finale and missed out on the Big 12 title game. The second was Crouch winning the Heisman, but man, he was fun to watch.

The St. Louis Rams drafted Crouch with plans to switch him to wide receiver since he was deemed too short to play quarterback at 6-foot. It's funny in hindsight since Kyler Murray barely cracks 5-foot-10. He might have a slight talent edge, though.

Anyway, Crouch was absolutely rocked in a preseason game during his first action as a receiver. He never played a regular season NFL game with the Rams, Green Bay Paackers or Kansas City Chiefs. Although he played professionally in the NFL's European League, the CFL, the AAFL and the UFL, Crouch's playing career essentially ended when the Cornhuskers lost to the Miami Hurricanes in the Rose Bowl.