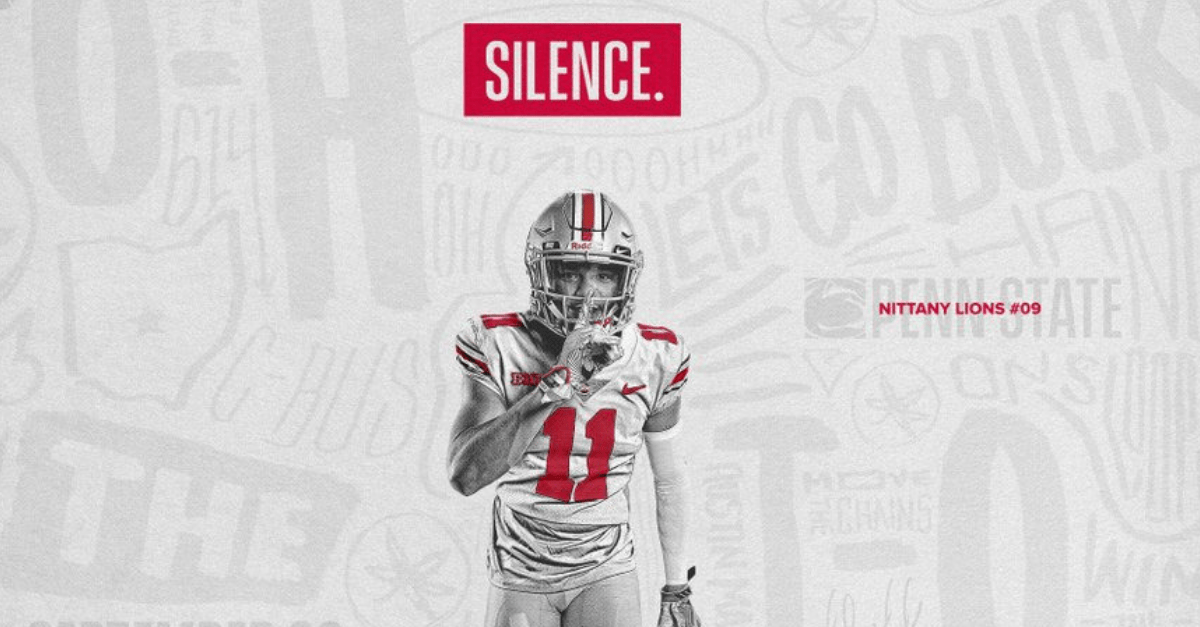 Some say winning cures all, that the outside drama will slowly go away with each victory. That might generally be true, but not if you are the Ohio State Buckeyes and what the program?s social media team posted to Twitter early Thursday morning.

After an expensive investigation that turned into college football?s biggest offseason storyline, Ohio State head coach Urban Meyer is back on the sidelines following a three-game suspension. However, heading into perhaps the biggest game on the undefeated No. 4 Buckeyes? schedule — a road battle against the No. 9 Penn State Nittany Lions — a simple tweet has stirred up the national media and general Internet public to create quite the frenzy before the big game on Saturday night.

On the surface, the tweet makes sense. Ohio State will stick with its all-white road uniform combination for the national-televised game, which also happens to be Penn State?s famous White Out Week that has everyone in Happy Valley pumped up beyond belief.

In hindsight, though, perhaps the wording is ill-timed, especially since the investigation involved domestic abuse allegations and an alleged cover up that resulted in the suspensions in the first place.

A picture featuring the word, ?Silence.? and a caption of ?Silence the white noise.? didn?t exactly set well with many people who saw the social media post.

The words ?tone deaf? were the undisputed theme of the morning.

Maybe not the best graphics move here given your cover up of domestic violence, guys. https://t.co/pQy3Vxmqq1

This is so tone deaf it deserves some kind of award: https://t.co/XcsAZSV8PM

Those were just reporters and media personalities, too. The thread under the original tweet from Ohio State was an absolute circus.

"The silence game". Classic. Dear Lord. You cannot be that clueless. pic.twitter.com/jIDMzSQYLf

There were well over 500 comments within three hours of the post. It was the most commented post of the week from the account with 255,000-plus followers by a large margin. Those five responses are just scratching the surface.

Perhaps just leaving the hype video up and calling it good would have been the best option?

Ohio State is on a mission to go undefeated and earn a spot in the College Football Playoff. This might be the toughest game on the schedule for the Buckeyes, and now there might be even more people rooting for them to lose based off what happened this offseason and this new tweet than ever before.

READ MORE: James Franklin Has Some Amazing Suggestion’s for Penn State’s White Out