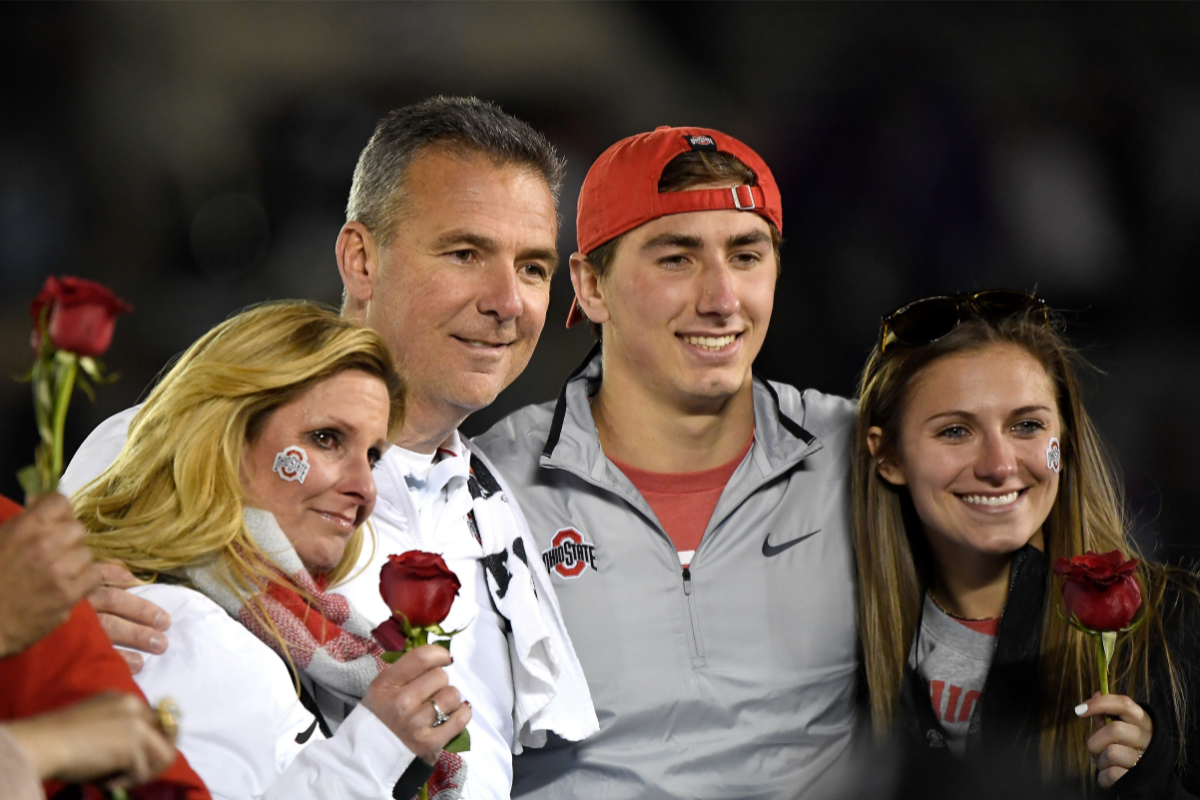 Urban Meyer will go down as one of the greatest college football coaches of all time. He’s won three national championships, two with the University of Florida Gators and one with the Ohio State Buckeyes.

His coaching career is uncertain after the Jacksonville Jaguars fired him before the end of his first NFL season in 2021. It’s been quite a ride for the 57-year-old. The Toledo, Ohio, native played defensive back at the University of Cincinnati before beginning his coaching career as a graduate assistant in 1986.

At each coaching stop along the way — Illinois State, Colorado State, Notre Dame, Bowling Green, Utah, Florida, Ohio State and Jacksonville — his family has been right by his side the entire time.

Meyer’s wife, Shelley Meyer, has been his backbone. His three children have been just as strong of a support system.

RELATED: Urban Meyer’s Wife Has Supported Him Since College

According to his Ohio State bio, the two of them live in Dublin, Ohio, and have two young sons named Troy and Gray. Imagine if Urban Meyer’s grandchildren were named Scarlet and Gray.

Nicki has vehemently defended her dad on social media often. When an ESPN host made a snarky comment about her dad not spending time with family and attending an Ohio State game in 2019, she fired back.

“How is this type of commentary even acceptable? The entire family including grandkids went to support my husband and the Buckeyes,” Nicki wrote on Twitter. “We had the best week in Arizona. @ESPN have some class. This is bad. I’d @ this guy but don’t know who it is. Pass it along friends.”

“Gigi” is a fitness guru who has a built her own fitness brand called GFIT. She and her husband Brian Pruett got married in February 2020. He played baseball at Florida Gulf Coast University while she was an athlete as well.

Gigi played volleyball at FGCU, where she was a star player. After her collegiate career, she briefly served as a volunteer assistant coach for the same program and talked about potentially going into coaching like her father.

“It was kind of a shock to me? Wow, my career is almost over. What’s the next step? Maybe I can stay in the competition and see it from a different point of view from the sidelines instead of on the court…A big reason is to see if coaching is the direction I want to go in, following in the footsteps of my father. I want to see if that’s something I would like to do,” Gigi told the Naples News.

Wouldn’t it have been something if she continued that path?

Nathan Meyer is the Meyers’ only son. He joined the Cincinnati Bearcats football team as a walk-on wide receiver and was part of their 9-1 season in 2020.

“He loved football and became enamored with it in high school, went to a very good program and had a very good experience,” Urban Meyer told ESPN. “As a young kid, he wasn’t really interested in football at all. My daughters were more into the football scene than he was, but then he really got enamored with it. He started training with the team, and that’s when he fell in love with the locker room, the people, the intensity, the weight training.”

Previously, Nate spent two seasons on Cincinnati’s baseball team. His sophomore year was cut short thanks to the coronavirus pandemic, however.

Diehard Ohio State fans might already know that Nate followed in the footsteps of his father a bit. Urban also played football at Cincinnati and played minor league baseball back in the day as a shortstop for the Atlanta Braves organization.

Coach Urban Meyer has accrued quite the number of accolades during his career. Three Big Ten Championships. Two SEC Championships. Numerous Coach of the Year awards.

Meyer’s days may be numbered winning national titles, and he’ll likely never get another shot in the NFL.

No matter what, though, the Meyer Family will always be strong.

MORE: Urban Meyer’s Net Worth is Only Skyrocketing in the NFL