It's hard to find consistent success as a football coach.

For coach Urban Meyer, success has followed wherever his coaching career has taken him.

Now, the head football coach is getting a shot at the Lombardi Trophy, and it pays handsomely. His first year may not be the year he achieves NFL greatness, however.

The #Braves select SS Urban Meyer from St. John's High School in Ashtabula, Ohio in the 13th round of the draft.

Meyer hits .182 across two seasons in the Gulf Coast and Appy Leagues and decides to pursue other things. pic.twitter.com/NXjQXPONY7

Urban Frank Meyer III was born on July 10, 1964 to Gisela and Bud Meyer in Toledo, Ohio. He grew up in Ashtabula, Ohio, and graduated from Ashtabula's Saint John High School in 1982.

Meyer excelled as a football player and on the baseball diamond in high school. He played two seasons as a minor league shortstop in the Atlanta Braves farm system.

While playing baseball, he played defensive back for the University of Cincinnati and earned a bachelor's degree in psychology in 1986.

The American football coach earned a Master's degree in sports administration from Ohio State University in 1988 and served as a graduate assistant for the football team under coach Earle Bruce.

Meyer was an assistant coach for Illinois State, Colorado State, and Notre Dame before landing his first head coaching gig at Bowling Green in 2001.

From his success leading the Falcons, he quickly became the hottest coaching commodity in the country and took the Utah Utes, Florida Gators, and Ohio State Buckeyes to new heights

He's done pretty well for himself at each stop.

The college football coach took a leave of absence following the 2009 SEC Championship Game for health reasons. It was discovered he had an arachnoid cyst in his brain related to stress. He left the University of Florida in 2010, citing family and health concerns. He won two BCS National Championship Games in Gainesville -- which Tim Tebow played a hand in both.

Meyer was placed on administrative leave due to a domestic violence case involving former OSU wide receivers coach Zach Smith before the 2018 season. He retired for a second time after the Buckeyes' 2019 Rose Bowl win over the Washington Huskies.

In between UF and Ohio State, he worked as a college football commentator for ESPN.

The former college coach returned to the media following his departure from Ohio State as an analyst on Fox Sports' pre-game show "Big Noon Kickoff."

Meyer came out of retirement a second time to try his hand at the NFL. He was hired as the head coach of the Jacksonville Jaguars in January 2021. His first season has been a tumultuous one, as his Jags have gone 2-10 through their first 12 games.

RELATED: Who is Urban Meyer's Wife?

Meyer has been married to Shelley Mather Meyer since 1986. Urban came under fire during the 2021 NFL season when he was spotted partying with women much younger than he is in a viral video that exploded on social media.

Together, he and Shelley have three children: daughters Nicole and Gisela Meyer and son Nathan Meyer. 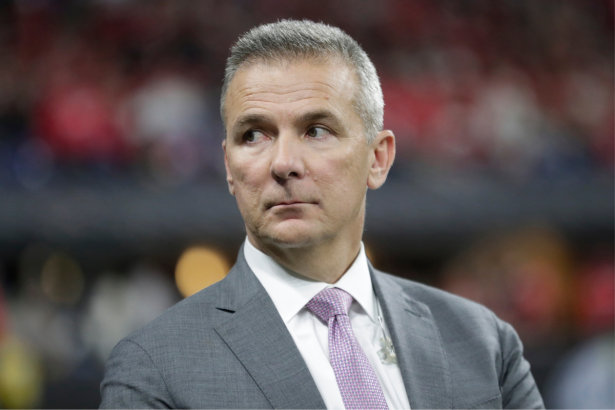 According to Celebrity Net Worth, Urban Meyer is worth $35 million. His contract with the Jaguars is undisclosed, but it's reported he asked for $12 million per year.

Meyer signed a six-year contract extension with Ohio State in 2015 that averaged $6.5 million per year. In his last season at the helm for the Buckeyes, Meyer's $7.6 million annual salary made him the second-highest paid coach in college football.

Meyer's proven himself countless times. It'll be riveting to see how he performs at the professional level.