Steve Spurrier is a college football icon. The Head Ball Coach first made a name for himself at the University of Florida, where he won a Heisman Trophy and parlayed his successful NCAA career into a first round draft selection in the 1960s and later became one of the most sought-after American football coaches.

With more than 50 years of his life dedicated to the sport of football, the 76-year-old Spurrier has shown no signs of stepping away from the gridiron or retiring in the Sunshine State. He even took over as head football coach of the Orlando Apollos of the Alliance of American Football league in 2019 and opened his own restaurant in Gainesville.

Spurrier still serves as an ambassador to the Florida Gators football program, which is only fitting considering he's as revered in The Swamp as Tim Tebow. In fact, he's enshrined outside Ben Hill Griffin Stadium in statue form alongside the school's other two Heisman winners -- Tebow and Danny Wuerffel.

The king of zingers and quips, Spurrier has gained notoriety over the years for taking digs at rival schools like Tennessee, Florida State, LSU and Georgia. On top of being a legend and Ring of Honor inductee at UF, he's also beloved for his coaching career at the University of South Carolina.

How much is the "Head Ball Coach" worth today, you ask? As you might expect, 50-plus years of playing and coaching pays off pretty handsomely. 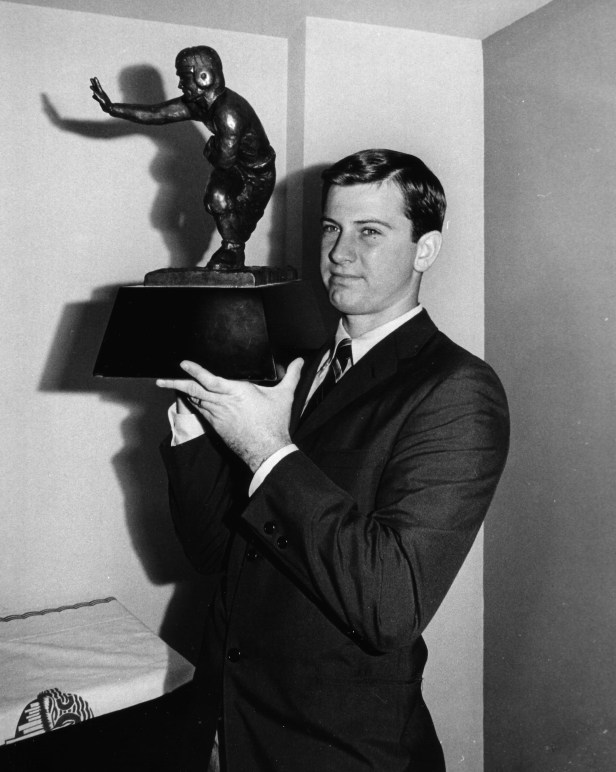 GAINESVILLE, FL - CIRCA 1963-1966: Steve Spurrier, #11 quarterback of the Florida Gators football team poses for a photo with the 1966 Heisman trophy at Ben Hill Griffin Stadium in Gainesville, Florida. (Photo by University of Florida/Collegiate Images via Getty Images)

Stephen Orr Spurrier was born in Miami Beach, Florida, but his family moved from his birth place early because his father -- J. Graham Spurrier -- was a minister. He became a three-sport star athlete at Science Hill High School in Johnson City, Tennessee, where he was an All-American quarterback for the football team and accepted an offer to play at the University of Florida under head coach Ray Graves.

After spending his first year in Gainesville on the freshman team and splitting time under center as a sophomore, Spurrier's NCAA career took off as a junior and senior from 1965-66.

He threw for 4,848 passing yards and 37 touchdowns over his three-year college career and won the Heisman Trophy award during his senior year. He led the Gators to a 9-2 record in 1966 but fell short of an SEC championship after losing to Georgia.

Spurrier then enjoyed a lengthy 10-year playing career in the National Football League, mostly as a backup. The San Francisco 49ers drafted him in the first round (3rd overall) in the 1967 NFL Draft and he stayed with the franchise until 1975. Spurrier's last season as a football player in the NFL came with the Tampa Bay Buccaneers in 1976. 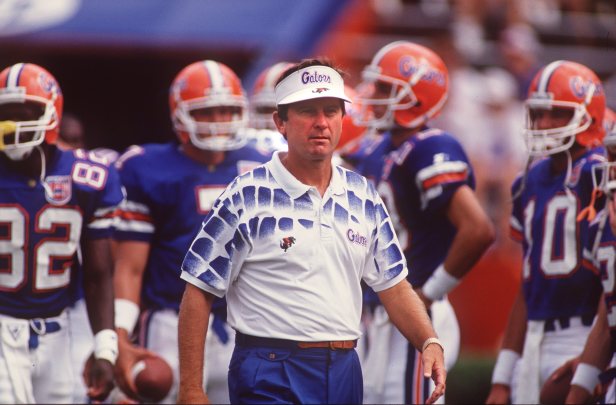 10 Sep 1994: FLORIDA HEAD COACH STEVE SPURRIER ON THE SIDELINES DURING A 73-7 WIN OVER KENTUCKY IN GAINESVILLE, FLORIDA.

Spurrier first began his illustrious coaching career with none other than the Florida Gators, where he was hired as the quarterback coach in 1978. He gained experience on the sidelines as an assistant at Georgia Tech and Duke before receiving his first head coaching job: The Tampa Bay Bandits of the new United States Football League in 1983.

The USFL dissolved in 1985 and Spurrier, who enjoyed success as an offensive guru in the professional football league, took over at Duke University in 1987. Following a successful three years with the Blue Devils -- including earning 1988 and 1989 ACC Coach of the Year honors -- the football coach returned to his alma mater to coach the Gators.

Spurrier turned the Gators into a powerhouse in the 1990s. He won multiple SEC titles and the program's first national championship in 1996 by beating the Florida State Seminoles behind Heisman winner Danny Wuerffel's arm and Spurrier's "Fun 'n' Gun" offense.

The school rewarded him after that by giving him $1.94 million per year, according to the Orlando Sentinel, making him the highest-paid coach in the NCAA and more than double what the second-highest (FSU's Bobby Bowden) made at the time. He still owns the most wins in Florida Gators history (122-27).

After years of NFL teams trying to pry Spurrier from Florida, the Washington Redskins finally succeeded in 2002 by giving the Head Ball Coach a five-year, $25 million contract that was the richest ever for an NFL coach. He forfeited the remaining $15 million upon resigning after the 2003 season, however.

Spurrier returned to coaching when he accepted the head coaching job of the South Carolina Gamecocks in 2005. His initial annual salary was $1.25 million, but in 2006, he signed an extension to bump that up to $1.75 million per year.

In 2011, Spurrier signed an extension that would pay him close to $3 million per year and by 2015 he was making $4 million per year, according to USA Today. Over his 11-year stay in Columbia, Spurrier became the Gamecocks' all-time leader in wins (86-49).

Spurrier rejoined the Gators in 2016 as an ambassador and consultant to the school's athletic program and has remained a part of the programs since.

In 2019, Spurrier agreed to dust off the visor and coach the Orlando Apollos in the new Alliance of American Football. Though the league disbanded, his team was a league-best 7-1 in the regular season. His salary for that position was reportedly $500,000, per Sporting News.

It's hard to say just how much Spurrier has earned from his more than 50 total years in the NFL and NCAA. It isn't unreasonable to estimate his career earnings to be more than $60 million, which is a solid chunk of change.

Steve Spurrier is hanging up his visor at South Carolina, but the head ball coach has had a heck of a run. pic.twitter.com/rteXZpS4o5

A true football legend as a player and college football coach, Spurrier was inducted into the College Football Hall of Fame twice -- in 1986 as a player and 2017 as a coach. UF even renamed its football stadium to Steve Spurrier-Florida Field at Ben Hill Griffin Stadium in his honor.

The former American football player has a wife -- college sweetheart Jerri Starr -- and four children -- Scott, Steve Jr., Lisa and Amy. Steve Spurrier Jr. has spent time in the NCAA ranks as an assistant coach and Scott served as Spurrier's tight end coach with the Apollos. Steve and Jerri Spurrier reportedly make their residence in Gainesville but also own a lavish beach mansion in St. Augustine, Florida, which he put on the market and listed for $5.8 million in February 2021.

Steve Spurrier has an estimated net worth of $25 million, according to Celebrity Net Worth. When Spurrier does finally decide to walk away from football completely, he'll have plenty of cash to go to Gator games and golf the rest of his days away.

This post was originally published on September 6, 2019 but has been updated.

MORE: Tim Tebow's Net Worth Was Built on Faith, Football, Books and Baseball