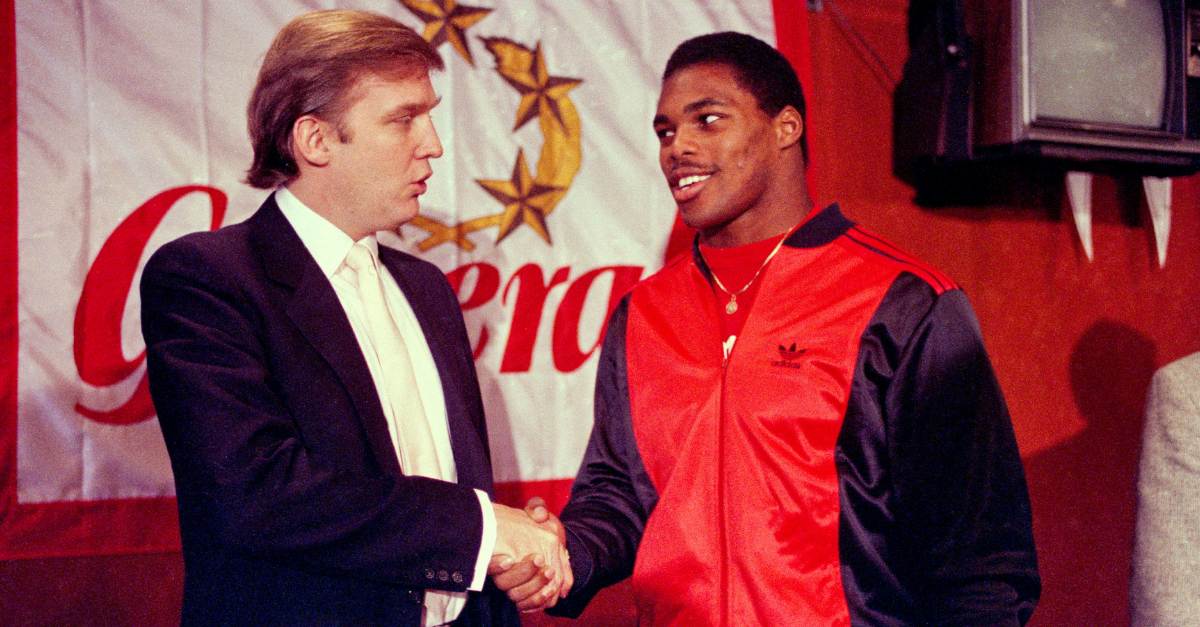 Before Donald Trump became the President of the United States and before he served fast food to championship teams in the White House, he was a businessman. Everyone obviously already knows that, but there?s a piece of sports history you might not know about him.

A few years ago, Trump actually tried to buy the National Football League?s Buffalo Bills. That has come to life recently because Michael Cohen testified Trump ?overstated his wealth? at the time. But before all of that, the 45th President actually owned a professional football team.

If you don?t remember the United States Football League (USFL), that?s quite fine. All you need to know is it lasted longer than the Alliance of American Football (AAF), which isn?t saying much, and that Donald Trump owned the New Jersey Generals before the league went bankrupt and folded after three years.

There is plenty of speculation that Trump had something to do with the league coming to an end (more on that in a second), but what?s crazy is he once had Hall of Fame running back Herschel Walker (Georgia) and quarterback Doug Flutie (Boston College) scoring touchdowns for his team.

Donald Trump, owner of the USFL's New Jersey Generals announces the signing of rookie Doug Flutie to a $7 million contract, luring Flutie away from the rival NFL and also the highest-paid professional football player.#TDiSH#SASM2250 pic.twitter.com/LHiN01wEQ7

RELATED: Donald Trump Lost Out on $5.5 Billion By Not Buying The Dallas Cowboys

The USFL came into existence in 1982 and the inaugural season started in 1983. USFL founder David Dixon wanted a team in the New York area, and that?s what happened. The Generals played their home games at Giants Stadium in East Rutherford, New Jersey. However, it took the team a little bit to get going in The Meadowlands.

Under head coach Chuck Fairbanks, who was famous for his days with the Oklahoma Sooners, the  Generals went 6-12 in 1983 and finished third in the Atlantic Division, missing the playoffs in the first season, before Donald Trump officially came into the picture.

Donald Trump was originally supposed to own the New Jersey Generals franchise, but it finally happened the following season. He took over ownership of the team from J. Walter Duncan and Chuck Fairbanks in 1984 and it took off.

Under Trump?s watch, and Michaels at the helm, the Generals posted a 14-4 mark during the regular season in 1984 and went 11-7 in the 1985 fall schedule. Unfortunately, the team lost both playoff appearances to the Philadelphia Stars and then the Baltimore Stars when they relocated the following year.

That 1985 team, however, was pretty strong. Herschel Walker broke a USFL record with 2,411 rushing yards, and fellow Heisman Trophy winner Doug Flutie commanded the offense before a broken collarbone ended his season in Week 15.

Still, two seasons with two playoff appearances and with two superstars is likely way better than you remember.

In 1986, before the season was canceled, the Generals acquired Hall of Fame quarterback Jim Kelly and Super Bowl champion wide receiver Ricky Sanders. The league ended after the USFL won just $3 in an antitrust lawsuit against the NFL.

The Fall of the USFL

Of course, the topics that come up surrounding Trump’s tenure don?t really involve football at all. The first involves Tampa Bay Bandits owner John Bassett threatening to punch Donald Trump in the mouth in a letter, which is just all sorts of wacky that USFL owners exchanged letters like that.

The second is a secret meeting with NFL commissioner Pete Rozelle in which Trump ?allegedly” promised to throw the USFL under the bus if it could land him an NFL team down the line. The two pro football leagues were rivals at the time.

Just a reminder: In 1983 @realDonaldTrump bought the New Jersey Generals of the USFL, a rival to the NFL. Within months he was meeting with the NFL commissioner, promising to help kill the USFL should it land him an NFL team. This is not, and never has been, an honorable man. pic.twitter.com/ShVo0X4bq3

There?s so much to unpack with Trump?s football ownership and the league?s demise. New York Times best-selling author Jeff Pearlman did just that in his book, Football for a Buck: The Crazy Rise and Crazier Demise of the USFL. ESPN also did it well with a 30 for 30 film titled, ?About Small Potatoes: Who Killed the USFL?”

It just still doesn?t change the fact that while the spring football league was in business, Donald Trump, the owner of the New Jersey Generals, had a talented USFL team.