In professional sports today, it is not uncommon for a player to sign a $40 million contract, and some athletes may even make that in one season. However, that was not the case in 1984. The USFL was a football league that was playing in the Spring, giving fans of the gridiron the opportunity to watch professional football in two different seasons. And with a new league came a lot of experimentation, especially when it came to drafting, acquiring and signing college stars in an effort to entice the NCAA's best and brightest to forego the NFL. One of those stars was Football Hall of Famer, Steve Young.

After finishing his career at Brigham Young University, Steve Young was pursued by both the NFL and USFL, and it took a historic 43-year contract to bring the future Pro Football Hall of Famer to the United States Football League.

With the USFL making its triumphant return to spring football, we thought it might be time for us to look back at one of the more innovative and crazy ways the league tried to turn football as we knew it, on its head. Trust me when I say that this contract is nuts, even if it. was offered and signed almost 40 years ago. 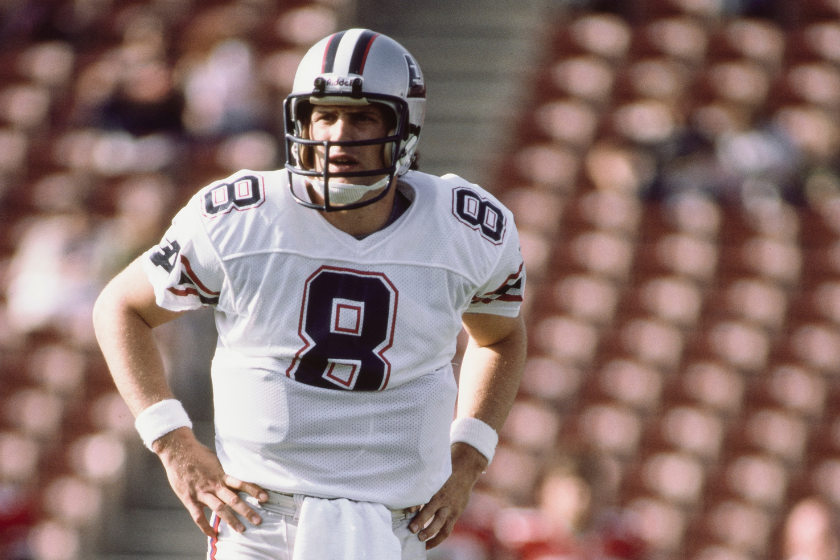 Although quarterback Steve Young's goal was to play in the National Football League, when the USFL's Los Angeles Express offered him a ridiculous contract after leaving BYU, it was apparently too good to turn down.

If he would have entered the NFL Draft, he would have been taken with the first-overall pick by the Cincinnati Bengals, a team Young would later beat in Super Bowl XXIII, but would have received a non-guaranteed contract worth a lot less money. But the contract from Billionaire Bill Daniels and his co-owner Alan Harmon was too large for the college football star, who had yet to throw a professional touchdown, to walk away from.

Young wasn't the only player to take a chance on playing pro football with the new league instead of entering the NFL Draft. Mike Rozier and Reggie White each chose the USFL as well. Rosier, a Heisman Trophy-winning running back from Nebraska, signed with the Pittsburgh Maulers and White, an All-American defensive end from Tennessee, signed with the Memphis Showboats.

There were also some other big names in the USFL, including Herschel Walker with the New Jersey Generals and Jim Kelly with the Houston Gamblers, giving the league some credibility.

"Thursday night that the Bengals finally assured Young that they would select him and make him an offer - a five-year contract that included a $1 million signing bonus and annual base salaries of $500,000. Not all the money, however, was guaranteed."

So in 1984, Young signed a four-year deal with the USFL team worth $40 million that would be paid out over 43 years. How it was supposed to work is he received a $4 million signing bonus and had a salary of $200,000 in his first season and gradually increased to $400,000 by his fourth season.

On this date in 1984, BYU quarterback Steve Young signed a "43-year, $40 million" contract with the USFL's Los Angeles Express.

After the fourth season, there would still be $30 million remaining on the contract, so that amount would be paid out over the next 37 years from when he turned 28 until he was 65 years old.

Since the deal was only for four seasons, once it ended, he could do what he wanted and still be paid by the Express until the contract ended in 2027. But apparently none of it was this simple. The contract was set up as an annuity, which is a sum of money paid yearly to an individual.

The owner of the LA Express, J. William Oldenburg, when the team and league folded, offered Young a sum of money to fund the annuity so he would receive the rest of his contract for the next half century. He could have either took close to a million dollars at the time or pay the annuity, but he apparently decided to take the money there.

If he had funded the annuity, he would be making well over a million dollars each year until the 2027 when the last year of the contract would pay out $3.173 million. But because the league folded in 1985, just two years after he signed with the Express, not only did Young not receive the money he had thought he would over 40 years, he didn't also get even close to that number.

It did eventually work out for the lefty quarterback, signing with the Tampa Bay Buccaneers and then being traded to the San Francisco 49ers where he would go on to win three Super Bowls against the Bengals, San Diego Chargers and Denver Broncos. Young would also win two MVPs and be voted to several Pro Bowls after taking over for Joe Montana and be known as one of the best quarterbacks in football history and be elected to the Pro Football Hall of Fame. Needless to say, everything worked out for one of the greatest NFL players to ever take the field.

The USFL returns to CBS in 2022 and if their history is any indication, it's going to be a wild ride.

READ MORE: The AAF is Dead, But Its $250 Million Investor Stole Exactly What He Came For