Urban Meyer is one of the great college football coaches in NCAA football history, having produced dominating eras as head coach of both the Florida Gators and Ohio State Buckeyes.

Meyer's head coaching career started all the way back in 2001 and lasted until his retirement from OSU in 2018. He tried his hand in the NFL with the Jacksonville Jaguars, which went...um poorly to put it lightly, but now Meyer has returned to the studio as a college football analyst on Fox's Big Noon Kickoff.

Throughout his up-and-down tenure, he's had a special someone cheering him on, his wife Shelley Meyer.

Ohio Through and Through

RELATED: Lincoln Riley's Wife is the Queen of Oklahoma Football

Urban Meyer was born in Toledo, Ohio, and attended Saint John High School where he was a standout baseball player, even getting drafted by the Atlanta Braves.

Meyer attended the University of Cincinnati and played defensive back for the program's college football team. He graduated in 1986 with a psychology degree and later earned his master's at Ohio State University.

Success at Every Coaching Stop 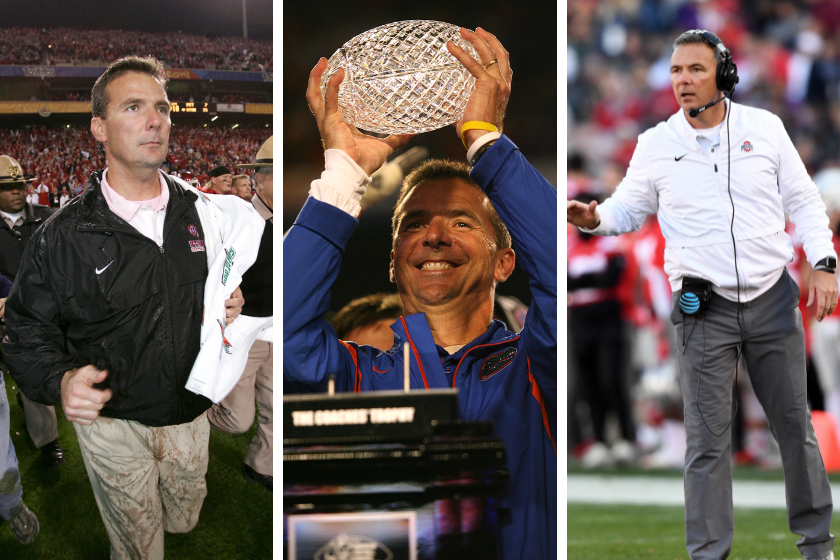 Urban Meyer got his start in coaching at Saint Xavier High School in Cincinnati, where he interned as a defensive backs coach. He then stepped into the role of graduate assistant coach of tight ends at Ohio State and studied under head coach Earle Bruce.

He then moved to Utah in 2003, taking over as head coach of the Utes. He led the team to a 22-2 record across his two-year tenure, including a 12-0 campaign in 2004 that saw the Utes win the Fiesta Bowl. He was named Mountain West Coach of the Year in 2003.

He accepted the position of head coach at the University of Florida in 2005, where he'd spend six seasons and win two BCS National Championships while posting a 65-15 record, alongside a 5-1 bowl game record, including wins at the Outback Bowl and the Sugar Bowl.

In 2008, one of Florida's National Championship years, Meyer's Gators took down Nick Saban's Alabama to win the SEC Championship.

While at Florida, he coached his first-ever Heisman winner in Tim Tebow and coached many players who would go on to have successful NFL careers. 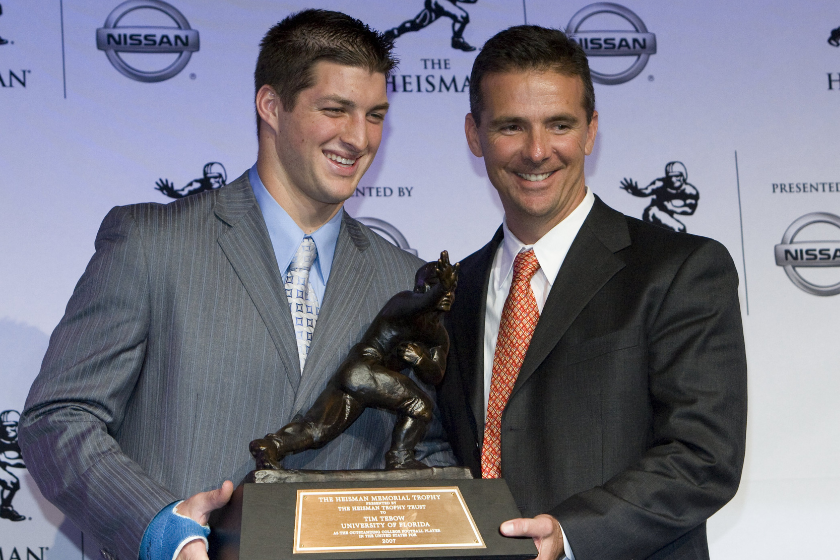 Meyer took a year off from coaching to focus on his health in 2011, at which point his Florida contract had expired. This opened the door for him to become the new head coach at Ohio State in 2012. While at Ohio State, Meyer led the team to an undefeated season in 2012, though NCAA sanctions resulted in a postseason ban for the Big Ten squad.

Over his seven-year tenure in Columbus, Meyer put up an incredible record of 83-9. The Buckeyes won the College Football Playoff in 2014, and made the playoffs in two of Meyer's seven seasons in charge.

Urban Meyer's OSU tenure was not without controversy. Ohio State fired wide receivers coach Zach Smith in 2018 after his ex-wife Courtney Smith filed for a restraining order against him.

Smith had already been given a second chance by Meyer during their time together at Florida when he was charged with domestic violence, and Meyer downplayed his knowledge of the 2015 incident in which Courtney Smith accused Zach Smith of battery, though he wasn't charged.

Brett McMurphy, who worked for Stadium at the time, reported that Meyer was aware of the incident and did nothing about it.

Meyer retired in 2018, citing his health issues (he had a cyst removed from his brain in 2014) and the three-game suspension he received as a result of the Zach Smith scandal.

Still, what Meyer achieved at OSU will not soon be forgotten, having won more than 90 percent of his games and going 7-0 against archrival Michigan. He was replaced as head coach by Ryan Day. 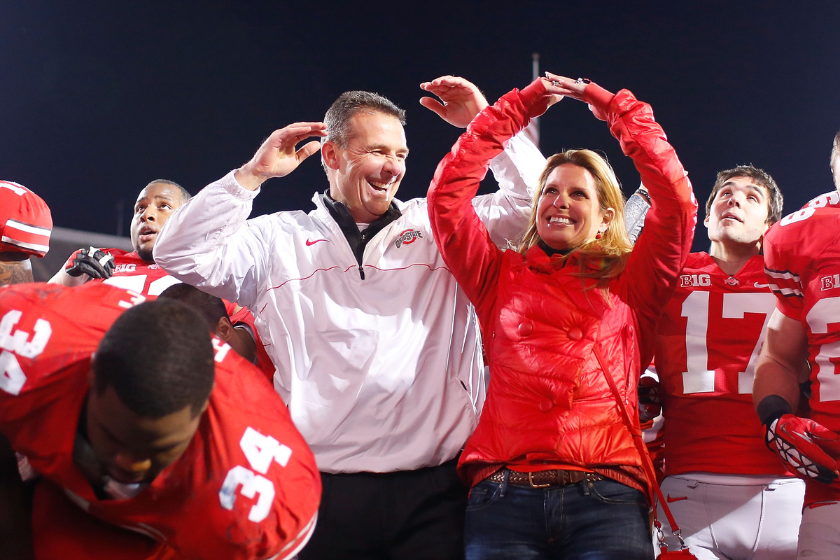 Urban Meyer is married to wife Shelley Meyer. The couple met in college at Cincinnati, where Shelley was a nursing student. The couple dated five years before tying the knot in 1986. The couple have three children together, daughters Nicole (Nicki) and Gisela (Gigi), and son Nathan. Nicki played volleyball at Georgia Tech, and Gigi played volleyball at Florida Gulf Coast University. Nathan, meanwhile, played baseball at the University of Cincinnati.

Shelley and Urban Meyer live in Ohio, but reports from Austonia.com claim the pair began looking at real estate in Austin, Texas in 2020, adding fuel to the fire that Meyer was considering replacing Longhorns head coach Tom Herman, whose job was under scrutiny after a loss to Iowa State. Shelley, used to be active on social media, but it appears she's recently stepped away from the keyboard.

Despite these rumors, Shelley has in the past claimed, via ESPN, that she hopes Urban is done with coaching, due to the health issues it flares up in the 58-year-old. Jaguars head coach Urban Meyer then began to sound nice, as he was hired in January 2021 to coach in the NFL for the first time. However, his NFL tenure was short lived and he only lasted 13 games, going 2-11, before he was fired.

His Scandalous Night Out in 2021

Is this why Urban Meyer is trending? ? pic.twitter.com/nFg8kUFVli

Former acksonville Jaguars coach Urban Meyer became a trending topic on social media last October for more than his team's slow start. After losing to the Cincinnati Bengals in heartbreaking fashion on Thursday Night Football and falling to 0-4, Meyer traveled to Columbus to visit his old stomping grounds.

He went out for a nice quiet dinner with his family until he was invited to the bar next door to take pictures with Ohio State fans. Meyer did take friendly pictures, but a video of a young coed dancing on him made waves online. Meanwhile, Shelley Meyer was babysitting their grandsons back home.

The internet had mixed reactions on the incident. Some attacked Meyer for being unfaithful to his wife while others defended him for not wanting to make a scene.

Official wife code rules: don?t let the girl even get close to doing this. Make it known you?re not there for flirting and hooking up. Then if somehow this STILL happens, get up and walk away. Men excusing other men?s bad behavior is bad for women everywhere.

Meyer apologized for being a distraction to the organization at his weekly press conference. He also apologized to his family.

Urban Meyer on what happened over the weekend pic.twitter.com/IxdUY1STO4

The video wasn't a great look in what was already a rough start to his NFL coaching career. He was fired two months in what can be summarized as an awful experiment. This, his 2-11 record, reports of him kicking a player and calling his coaching staff losers made it an easy decision for the Jaguars.

Now, Meyer reprises his role as an analyst on "Big Noon Kickoff" alongside Rob Stone, Matt Leinart, Reggie Bush and Brady Quinn. Seeing how his time in the NFL went, I'm sure he's happy to be involved in college football again.