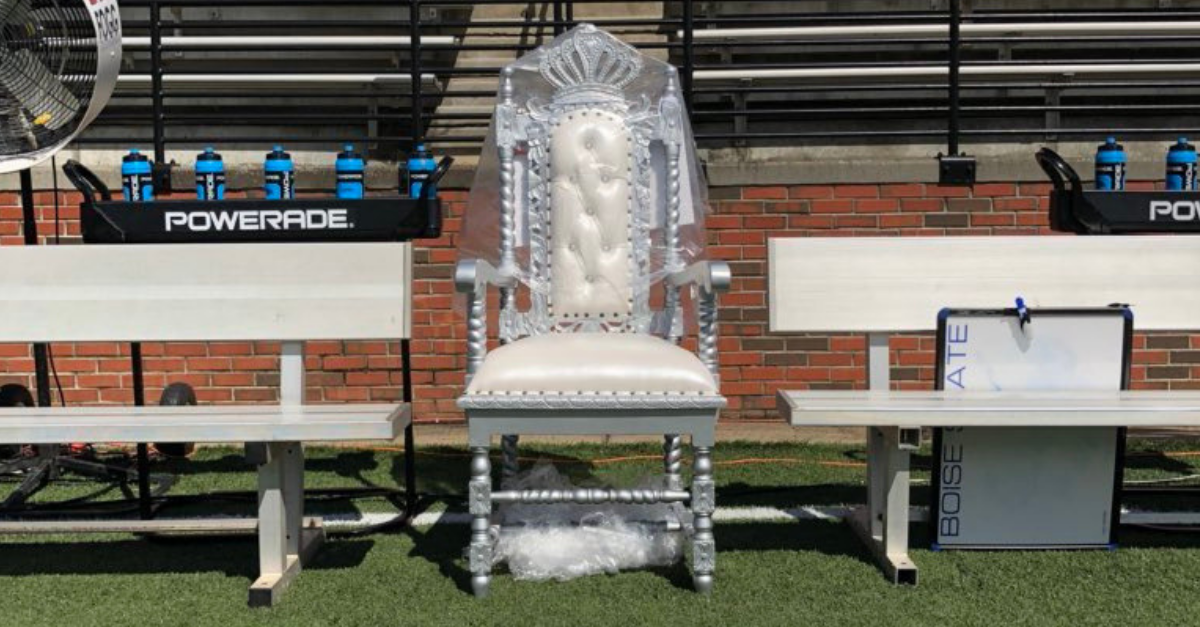 With each new college football seasons comes brand new traditions. None of them will likely ever top these electric entrances, but the creativity for things to celebrate keeps getting better and better.

Miami (FL) made the turnover chain a rather popular concept in 2017. Alabama did the same with the ?Ball-Out Champ? belt a few years ago, too. Boise State took it to the next level, though, when it busted out the ?Turnover Throne? for the season opener against Troy.

Forget other spinoffs like Tulane?s Mardi Gras-style beads, Temple?s dry erase board, UTSA?s turnover bucket or Memphis? turnover robe. The Broncos have the next best celebration in football with an actual throne sitting on the sidelines.

In No. 22 Boise State?s 56-20 thumping of Troy at Veterans Memorial Stadium in Troy, Alabama, the Broncos forced four turnovers, including two fumble return touchdowns by defensive back Tyler Horton, to debut the throne with ?Kings of Choas? posted on the back.

What a way to show off the upgrade.

The Kings of Chaos 👑 reigned at Troy Saturday and the seat of the Turnover Throne never went cold, as the Broncos forced 4️⃣ turnovers including two @OohHorton fumble return TDs!#BleedBlue

Never went cold is an understatement and you better believe it got the Broncos players hype.

?At Miami, they?re rocking that chain, you see somebody on their team swinging that chain around and it does nothing but bring great vibes to the sideline. That?s what college football is about, having your brothers all by you and finding ways to really spark up the evening with something big like a turnover.? ? Tyler Horton via the Associated Press

The creativity truly is off the charts these days. WWE-style belts, chains, beads, robes, and thrones have all become synonymous with defensive takeaways. Louisville also has new belt and ?Touchdown Gloves? signed by the late Muhammed Ali, which were donated to the university by his widow.

Worked with Lonnie Ali and Coach Petrino.. meet the “Touchdown Gloves” and The “Turnover Belt”.. the UL version of the Turnover Chain.. warms my heart to keep the Ali connection. Coach Petrino’s idea. pic.twitter.com/UBjiku2sRk

There?s no telling how far this will go. Chances are it will get crazier and crazier each year, with teams trying to have the best.

Right now, that belongs to Boise State because the new ?Turnover Throne? is one of a kind.

READ MORE: The Most Dangerous Places to Drive on College Football Gamedays