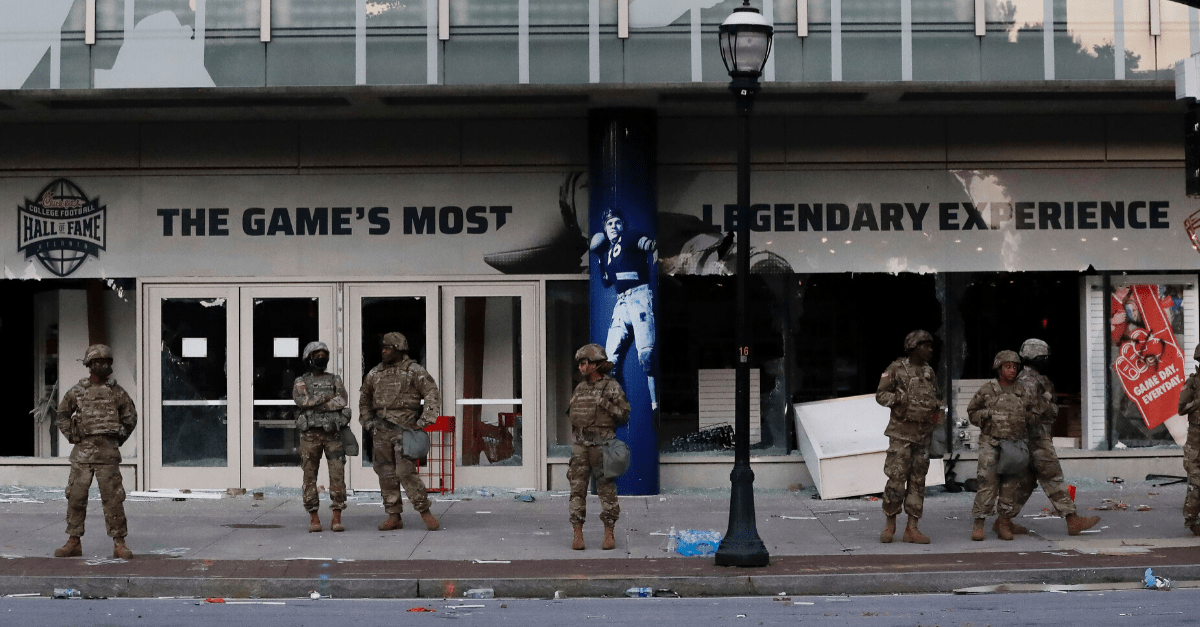 The death of George Floyd caused violent riots in Minneapolis, Minnesota. The fourth-straight day of protests saw cites around the United States join in the outcry for justice, many instances causing thousands of dollars in damage to local businesses as looting broke out.

One of the worst cases is Atlanta, Georgia. Protestors broke into jewelry and retail stores, making off with armfuls of merchandise. The source of the anger behind these protests is the killing of black people in the custody of white police officers; Vandalizing stores does nothing but dishonor the innocent dead. In a passionate speech late Friday night, Atlanta Mayor Keisha Lance Bottoms condemned the looting by saying, “This is not a protest. This is not in the spirit of Martin Luther King, Jr. This is chaos.”

According to CNN, peaceful protests began Friday afternoon near the CNN Center and Centennial Olympic Park before things turned violent as the sun went down. Among the damaged buildings was the one closest to the heart of sports fans, the nearby College Football Hall of Fame.

The College Football Hall of Fame in Atlanta has been destroyed.

The sport of football represents bringing people of all backgrounds together for a common goal. Last night, rioters obliterated the hall of fame.

This is simply horrible. pic.twitter.com/05xMK0UkyF

Images of the damages on Saturday morning were shocking. Broken glass, empty shelves and clothes hangers scattered the sidewalk outside. Nothing was left behind. Fortunately, looters were reportedly only able to destroy the Hall of Fame’s gift shop, according to AL.com, and the priceless memorabilia of the sport’s past is apparently safe.

“In the coming days and weeks, we’ll work to pick up the pieces to rebuild the sacred walls that housed memories and honored those who played the game, many of whom fought these same injustices throughout their storied careers.”

#BREAKING New photos show damage to the front of the College Football Hall of Fame, the CNN Center, and The Omni Hotel after protesters move through Downtown #Atlanta. #fox5atl #GeorgeFloyd pic.twitter.com/AZn4sx7fYz

Damage to the College Football Hall Of Fame pic.twitter.com/NbV0oY91t9

Windows smashed at the College Football Hall of Fame. Graffiti tells the story of the night. pic.twitter.com/0KG2jVVczA

The College Football Hall of Fame in Atlanta is unrecognizable… It’s 1 of many buildings that’ve been destroyed by protestors #atlantaprotest #JusticeForGeorge #CBS46 pic.twitter.com/0T9rZimQxo

Scene outside the College Football Hall of Fame. pic.twitter.com/j114CDFwch

The College Football Hall of Fame moved from South Bend, Indiana, to Atlanta back in 2014. The $68.5 million museum houses the memories and legacies of college football’s past in the heart of Georgia. It’s a damn shame such a place was vandalized with absolutely no positive outcomes in mind.

Georgia Gov. Brian Kemp deployed National Guard members to Atlanta after declaring a state of emergency, and it’s unclear how much the damages in downtown Atlanta will ultimately cost the city.

One thing is certain: vandalism and looting for the sake of personal gain and benefit is not going to effect change. George Floyd died, and police officer Derek Chauvin has been arrested and charged with third-degree murder. This is terrible situation that deserves the wave of support people are showing by taking to the streets, but looting museums and stores like they are goodie bags is just despicable.

MORE: Colin Kaepernick Supports Protests: “We Have The Right to Fight Back!”