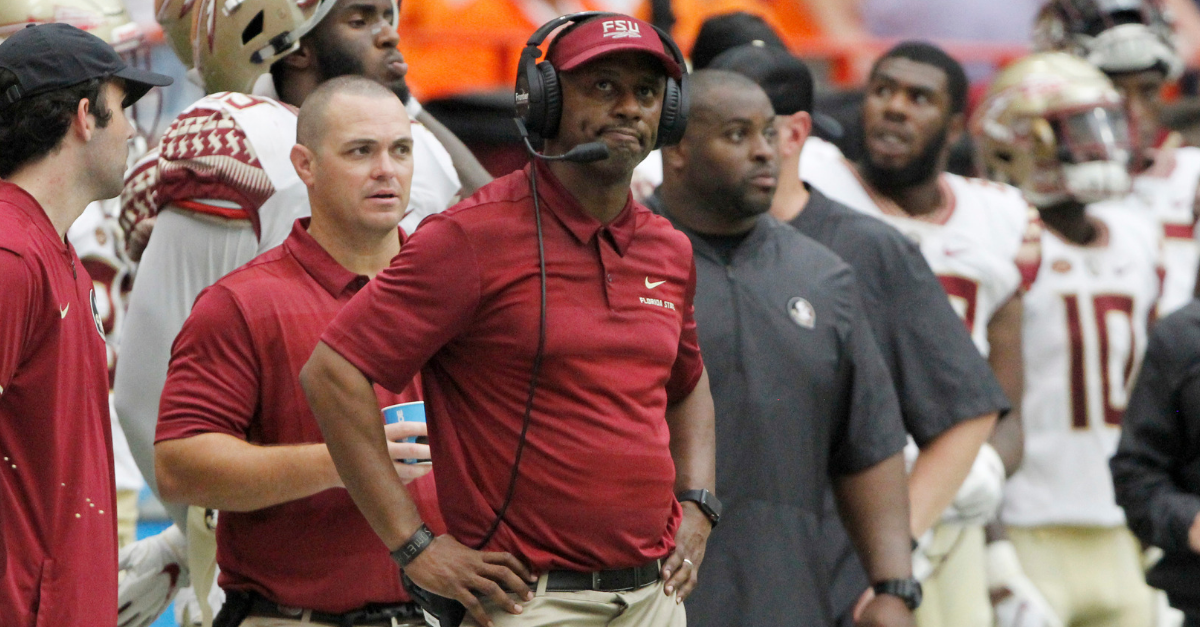 From the first time a young kid straps on football pads, they’re taught technique, technique and more technique. You can be the biggest, strongest and fastest player on the field, but if you play with bad fundamentals, you are going to lose in the long run. No where is technique more crucial than on the offense line.

The Florida State Seminoles have instituted a vertical, up-tempo passing game under new head coach Willie Taggart. So far, though, the Seminoles have stumbled out to a 1-2 start, and the frustration is visible on the field from quarterback Deondre Francois, the team’s most important piece. That’s because this team’s offensive line is losing battles up front, and the Seminoles are digging themselves deeper with every possession.

The key to Willie Taggart’s offense is tempo. First and foremost, this offense goes with confidence in the passing game. It’s impossible for Francois to get anything going when the Seminoles offensive line looks lost possession after possession.

Early in Florida State’s game versus Syracuse, the Orange showed a basic blitz to the Seminoles. The middle linebacker (12) will run a stunt with the defensive tackle. Florida State’s tight end (6) is heading out on a pass route, so the outside defensive end is automatically the responsibility of the right tackle (74).

What happens, though, is the right tackle (circled) crashes down on the defensive tackle, leaving the defensive end with a free run at Deondre Francois. What’s worse, is the right guard (red arrow) is watching the linebacker blitz away from him, and doesn’t block anybody on the play.

Now, the play has yet to even develop down the field, and Francois is forced to throw up a duck off of his back foot on third down, which is ultimately overthrown.

The first problem with this offensive line is they’re killing their own quarterback on missed assignments.

On a 2nd-and-13 play, it’s an obvious passing down for this offense. The offense knows it, the defense knows it, the kids in the student section 60 rows up know it. So, why is the right tackle (FSU lineman closest to us) starting in a run blocking stance with his feet almost parallel?

If he has any chance of blocking this defensive end, he needs to start with that outside leg further back to get a quick start off the ball.

The Syracuse defensive end knows that this tackle is playing with slow feet, and once he can get this offensive lineman to turn his shoulders and cross his feet like here, it’s game over.

He gets totally turned around, lost his angle on his defender, and now Francois is forced to get a pass off that ultimately gets disrupted by this rush, and it falls incomplete. Once again, Florida State is stuck with a 3rd-and-long situation.

On a 2nd-and-10, the Seminoles are going to run a screen play against a basic four-man front. The receiver in motion (29) draws the eyes of the linebackers, and this play looks perfect pre-snap.

When the right guard (circled) turns the entire way around as he releases, he’s effectively taken himself out of this play before it even began.

Did I mention you should never turn your back? As Francois completes this pass to his running back (circled in yellow), another offensive lineman (red arrow on the left) turns entirely around in the process. The guard who turned around the first time (72) is now in terrible position to get upfield and block for this play (minor note: running backs are always faster than lineman). Even if the play were to work out, he’ll never catch up.

To boot, the center (red arrow furthest to the right) over-runs the linebacker, who eventually makes the tackle for no gain. If these three play with better technique, there is a TON of room ahead of running back Cam Akers.

Instead, he’s put down for a small gain, and the Seminoles are stuck in ANOTHER third down and long situation.

The staple of every college offense is the Read Option. Here, Florida State is going to run that same action, where the quarterback will read the Syracuse defensive end (closest to us).

If the end attacks the running back, the quarterback will keep the ball and run himself. If he stays at home, he’ll hand it off to the running back, and Akers will out run this end to the outside part of the field.

The center is going to block the backside linebacker, and the wing back will stay outside and pick up the linebacker furthest to the outside of the play. The key to this play working is the pulling guard (highlighted in blue).

He is going to come from the opposite side, turn the corner and either block the middle linebacker, or if the defensive end that the QB is reading (circled in yellow) is in his way, he’s going to blow him up.

What he ends up doing, unfortunately for this play, is neither.

The defensive end flies up the field, and the guard decides to peel back and follow him. The quarterback knows that if he sees the defensive end come up the field, he is keeping the ball. Rather than have good judgement and stay on his assignment, the pulling guard ends up taking himself out of this play entirely, and the middle linebacker (circled) ends up making an easy tackle of the quarterback for no gain.

Yet again, Florida State is stuck in a 3rd-and-long situation. This time deep in their own territory.

The Seminoles offense isn’t helping quarterback Deondre Francois or running back Cam Akers at all up front. This offensive line is playing with some terrible technique and making bad judgement, which is forcing Florida State into long yardage situations. Worst of all, they’re getting their quarterback killed.

Head coach Willie Taggart needs to modify his game plan to help this offensive line. It’s obvious that they are the weak link, and whether that be poor coaching or poor preparation, something has to change.

This offense is playing with zero confidence, and with ACC conference play on their doorstep, they need to make a change before things get even worse the rest of the season.