For as long as Frank Gore Jr. has been alive, his father has been dominating on the gridiron. Whether it was for the Miami Hurricanes or in the NFL, the blueprint for greatness was mapped out to perfection. Now, it's just up him to carry on the family name and legacy.

Gore Jr., the son of NFL great Frank Gore, is tearing up college football with the Southern Miss Golden Eagles. From the moment he stepped on campus, he had his dad's instincts to find the end zone. A few seasons of, well, seasoning and he's turned into one of the NCAA's few 1,000-yard rushers, something his dad never did at Miami.

It's impossible to watch the sophomore running back and not see shades of his dad. 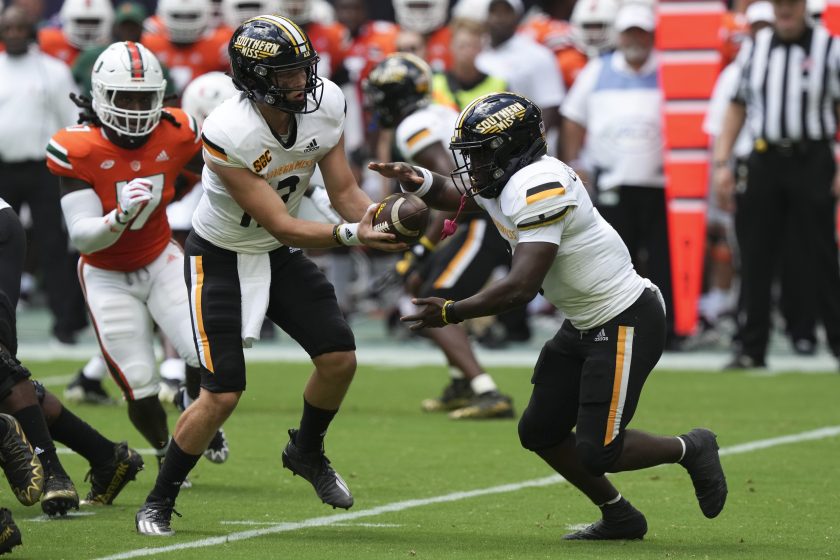 At 5-foot-8 and 170 pounds in high school, Frank Gore Jr. wasn't the biggest guy in the world, but he was still an effective rusher. He started out at Coral Gables Senior High School before transferring to Miami Killian High School, where he rushed for 1,111 yards and 13 touchdowns as a senior.

A three-star prospect, according to 247Sports, Gore Jr. originally committed to play for the Florida Atlantic Owls. Just before head coach Lane Kiffin left FAU to take the Ole Miss job, however, Gore decided to take his talents to Southern Miss and signed his letter of intent during the Early Signing Period.

Gore Jr. also fielded offers from Chattanooga and Kentucky and interest from the University of Miami, where his father ran wild from 2001 until being a third-round pick in the 2005 NFL Draft.

At the end of the day, though, Southern Miss was the place he wanted to be, and Conference USA football teams have had to game plan ways to stop him ever since.

There's no doubt he has some major shoes to fill, fairly or not. Frank Gore Sr. put together a long and incredible career with the San Francisco 49ers, Indianapolis Colts, Miami Dolphins, Buffalo Bills and lastly the New York Jets. He passed Barry Sanders for third on the all-time rushing list in 2019 and ended with exactly 16,000 rushing yards.

While nobody expects his son to put up those kinds of numbers, Gore Jr. will be looking to make a big impact in every football game he plays. He's been doing that during the 2022 season for Southern Miss. 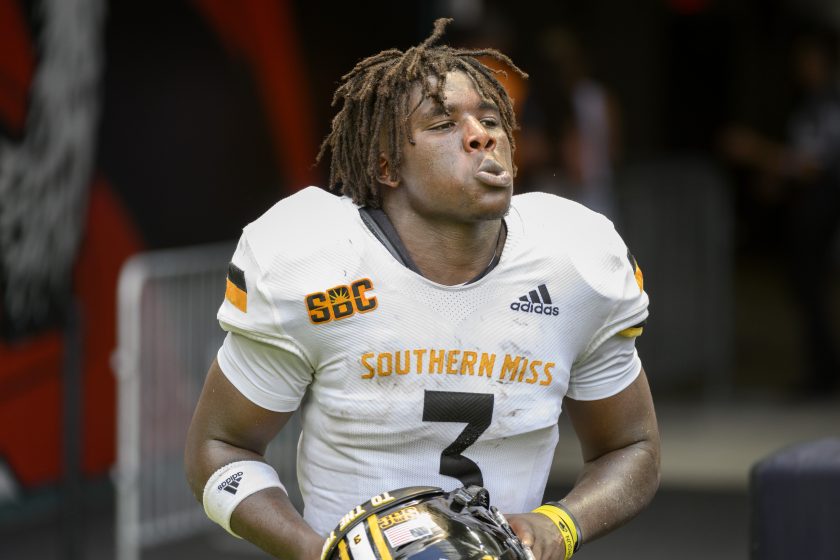 It didn't take long for Frank Gore Jr. to showcase his skills.

He ripped off a crazy 51-yard reception touchdown against UTSA back in 2020. If you can't see shades of his dad here, you need to open your eyes.

"Like father? Nah, it's like son!" the broadcaster said as the younger Gore rushed into the end zone after juking about five defenders on one cut.

Frank Gore Jr. made his namesake proud with this score ? pic.twitter.com/fGFGruCp08

And he's only gotten better each year. Gore Jr.'s 1,053 rushing yards this season rank 30th in the NCAA, ahead of notable names like Alabama's Jahmyr Gibbs and Auburn's Tank Bigsby. For reference, his dad's best season at Miami was in 2004, when he totaled 945 rushing yards.

Oh, and did I mention he can throw? He has seven passing touchdowns in addition to everything else he's doing.

FRANK GORE JR. WITH A DIME OF A TD THROW ??? pic.twitter.com/dgKsX3TL5x

Keep an eye out for this kid. He could be playing his way to the NFL.