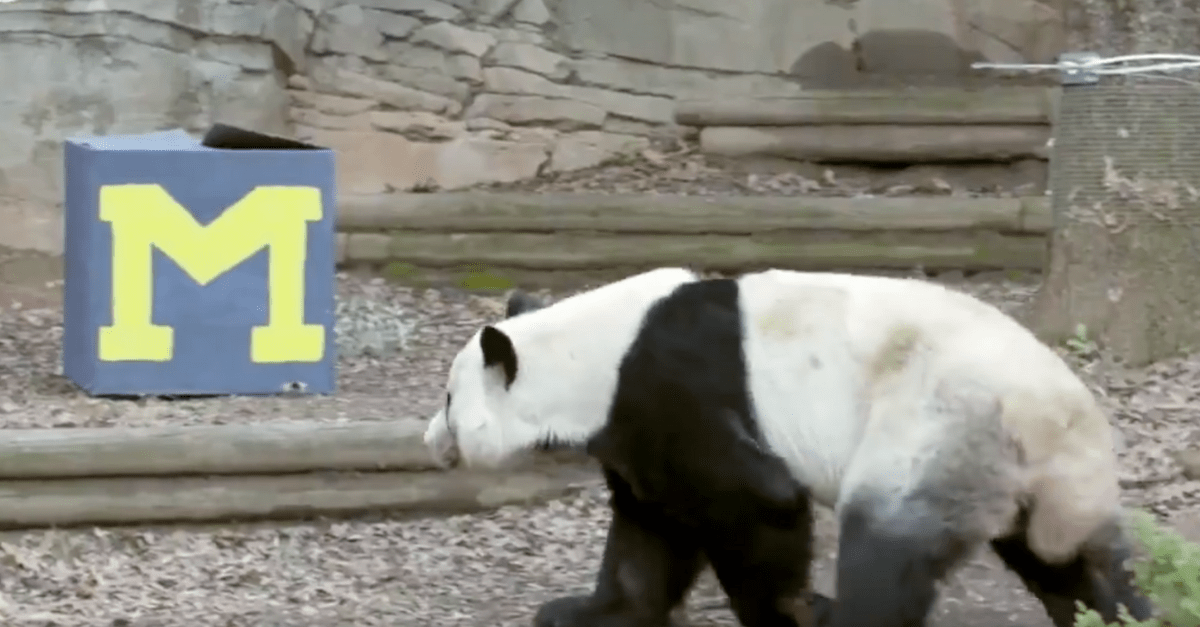 There?s nothing quite like college football, especially during bowl season. During the regular season, College GameDay hosts ?expert? analysts like Kirk Herbstreit, Lee Corso and Rece Davis, everyone knows the true expert pickers are usually furry or walk on all fours.

That?s right, I?m talking about those zoo animals. A porcupine has already boldly picked Oklahoma to beat Alabama, and now another animal oracle has made its selection. Zoo Atlanta?s very own Giant Panda, Yang Yang, had the distinct honor of choosing between Florida and Michigan for this year?s Peach Bowl.

Tasked with choosing between two food-filled boxes featuring each team?s logo, Yang Yang clearly didn?t think twice. He bolted straight for the navy and yellow and never looked left. He then began climbing inside of it, just to rub it in.

Yang Yang joins a long list of animals to predict the outcome of a sporting event. Pierce the porcupine picked its Orange Bowl winner. But the most famous animal picker of all time, and without a doubt Yang Yang?s idol, was Paul the Octopus, who gained fame for his ridiculous success rate predicting Germany?s World Cup matches in 2010.

Let?s be honest, though, Yang Yang is no Paul. Sure, he?s adorable. But he?s only like the third-most popular panda in sports behind the talented, bowl-flipping Red Panda and baseball?s Pablo Sandoval a.k.a. ?Kung Fu Panda.?

The good news for Gator fans is that Yang Yang is just 1-1 in past predictions. He correctly picked Alabama to win the SEC Championship Game two years ago (against the Gators) but whiffed choosing Auburn in the same game last year.

What was Yang Yang?s thought process in choosing? Maybe it knows that a wolverine looks like a cross between a bear and a cat, and the Giant Panda?s Chinese name literally translates to ?bear cat.? Maybe he?s done his homework and knows Michigan is 4-0 versus Florida all-time. Maybe he just hates the Gators. Who knows.

I can?t even blame Yang Yang. If he were choosing between a live version of each team?s mascots, an alligator or a some wimpy wolverine, the logical move would be to stay away from the reptilian behemoth. Alligators don?t have any predators. A wolverine?s main predator is the gray wolf, and an alligator would maul that in a heartbeat.

What would?ve been better is if Yang Yang had to choose between a snack stuffed in the pockets of a pair of khaki pants or buried in some Jordan brand shoes. I?ll let you guess which of those belong to Jim Harbaugh and Dan Mullen.