College Football is Back, and So Are Hilarious College Gameday Signs 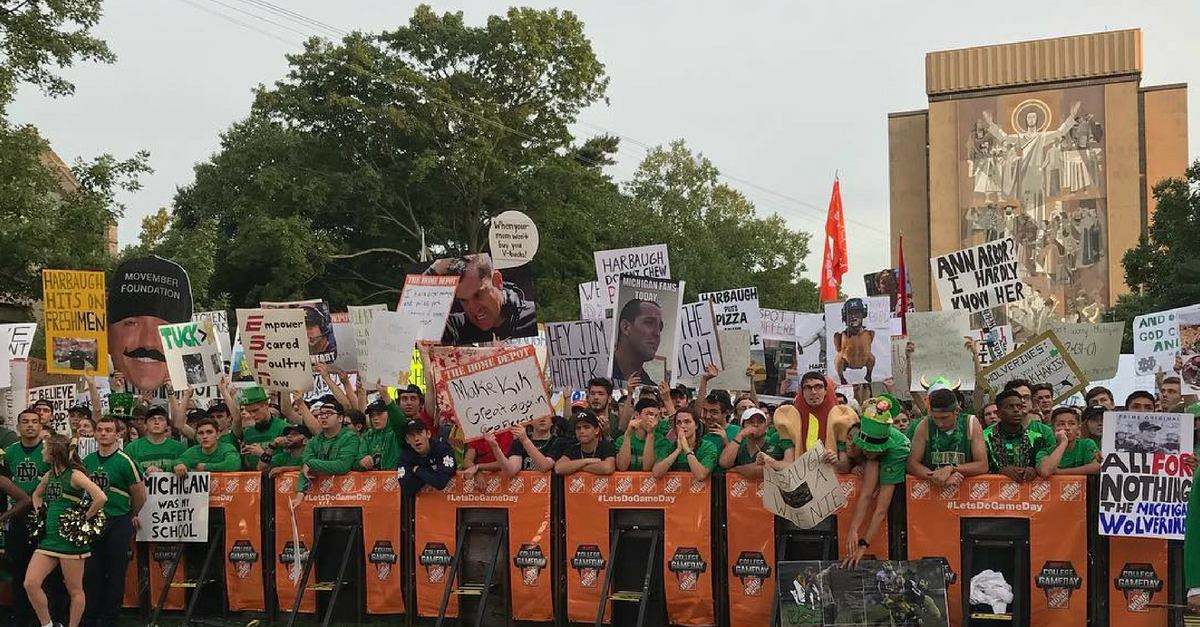 College football fans will never pull punches, especially when it comes to their signs at ESPN’s weekly broadcast of College Gameday. Saturday’s aren’t typically the Catholic Holy Day, but when the ESPN crew rolled into South Bend, Indiana and the University of Notre Dame, the Fighting Irish faithful packed in front of Touchdown Jesus and gave thanks in a different way.

The weekly broadcast is only three hours, but hundreds turn out with the sole purpose of getting their most witty, colorful sign on national television. There are tons that never get the air time they deserve, but the ones that do NEVER disappoint.

Head coach Jim Harbaugh and the No. 14 Michigan Wolverines traveled to South Bend to take on coach Brian Kelly and the No. 12 Notre Dame Fighting Irish in a huge prime-time game for both teams.

When Notre Dame fans took the stage early on Saturday, they brought out the big guns to kick off the season. Here are some of the hilarious highlights:

Looks like Harbaugh is in his feelings too pic.twitter.com/bx2tWteDkW

@CollegeGameDay just making sure we don’t get our sign taken away pic.twitter.com/iSVYYRNlw3

The best sign from the 2017 season: NEXT LEVEL pic.twitter.com/RVg04GNNM9

I mean …. I’m not gonna pretend I didn’t laugh at this 😂 #MakeGameDayGreatAgain @CollegeGameDay pic.twitter.com/KM7jsmLlkm

That’s weird but ok let’s do it

READ MORE: Why Auburn and Washington Could Decide Their Fate in Week 1