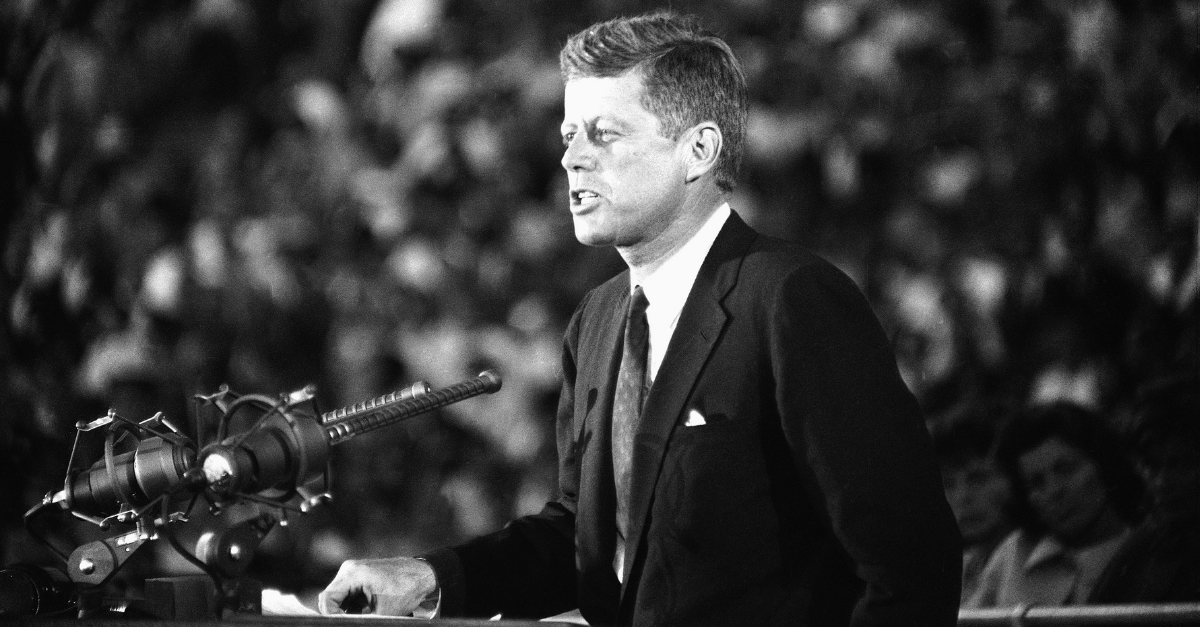 Somewhere inside the John. F. Kennedy Presidential Library and Museum sits one of the most memorable speeches in United States history. It was delivered by JFK himself and ?We choose to go to the Moon? will forever be a famous tagline for the 35th President of the United States. However, there?s something about the document that proves once again he was a major sports fan.

The Moon Speech was delivered on September 12, 1962 at Rice Stadium in Houston, Texas. While he trying to persuade the American people to support the Apollo program at Rice University, John Fitzgerald ?Jack? Kennedy decided to ask the ultimate football question just before he delivered the big punchline.

?Why does Rice play Texas?? Not only was it legitimate question in the heat of the gridiron rivalry, but it wasn?t exactly planned. President John F. Kennedy actually wrote that in by hand.

The JFK Presidential Library & Museum holds a copy of the famous 1962 Moon Speech he gave in Rice Stadium—note he hand-wrote in the line "Why does Rice play Texas?" before the famous tagline— pic.twitter.com/qJGxjoXTNA

RELATED: The 10 Sitting Presidents to Attend the Prestigious Army-Navy Game

At the time, the question was perfect. The Rice Owls, a much smaller school, had a 5-4 record over the mighty Texas Longhorns in the previous nine meetings before the speech, and the two programs actually tied each other, 14-14, in 1962.

The good news is the lost college football rivalry in the state of Texas will be renewed. Rice and Texas are set to play September 14, 2019 at NRG Stadium in Houston. The Longhorns will be heavy favorites, of course, so we can start asking why the Owls agreed to play it again in the first place, much like President Kennedy’s speech did over 55 years ago.

—Here's Kennedy delivering that paragraph of the speech; he actually repeats the oft-quoted "We choose to go to the Moon" 3 times before moving to the next line of the speech: pic.twitter.com/nFnruIEQMO

“We set sail on this new sea because there is new knowledge to be gained, and new rights to be won, and they must be won and used for the progress of all people. For space science, like nuclear science and all technology, has no conscience of its own. Whether it will become a force for good or ill depends on man, and only if the United States occupies a position of pre-eminence can we help decide whether this new ocean will be a sea of peace or a new terrifying theater of war. I do not say that we should or will go unprotected against the hostile misuse of space any more than we go unprotected against the hostile use of land or sea, but I do say that space can be explored and mastered without feeding the fires of war, without repeating the mistakes that man has made in extending his writ around this globe of ours.

“There is no strife, no prejudice, no national conflict in outer space as yet. Its hazards are hostile to us all. Its conquest deserves the best of all mankind, and its opportunity for peaceful cooperation may never come again. But why, some say, the Moon? Why choose this as our goal? And they may well ask, why climb the highest mountain? Why, 35 years ago, fly the Atlantic? Why does Rice play Texas?

Of course, JFK pretty much wanted a space race competition with the Soviet Union during the speech, and made the Moon landing a priority. Then, it happened in 1969 with NASA?s famous Apollo 11 mission with astronauts Neil Armstrong, Buzz Aldrin and Michael Collins.

Nevertheless, the question John F. Kennedy asked over two decades ago has become in artifact in Boston, Massachusetts. And now, nearly 2,000 miles away at a football stadium in the City of Houston — the home of the Johnson Space Center — the college football rivalry he once questioned will set sail on a new frontier once again.

The fact the POTUS, in the middle of talking about our space program and space exploration, threw out a college football reference is still crazy.