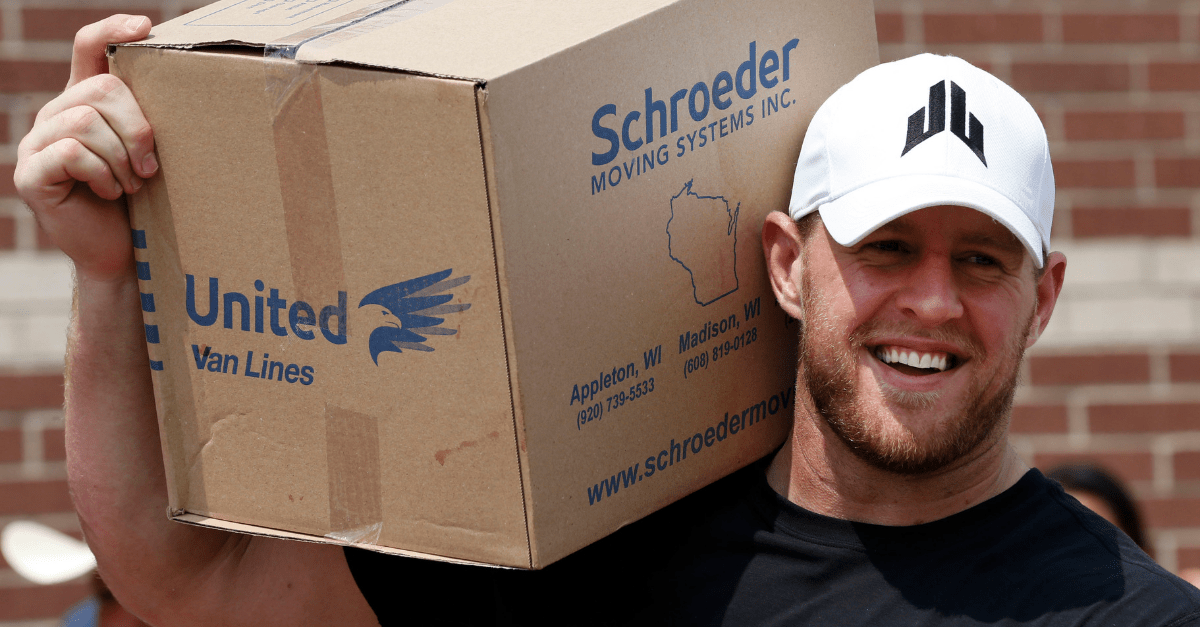 On August 25, 2017, a Category 4 hurricane named Harvey made landfall near Rockport, Texas with winds touching 132 miles per hour. Over the next few days, the tropical storm dumped 19 trillion gallons of water, submerging over 30-percent of Harris County. More than 200,000 homes were damaged, the storm caused $125 billion in damages, and tragically, 89 people were killed.

Two days later, Houston Texans defensive end J.J. Watt sent out a tweet. Watt asked for any donations people could spare in an advance effort to combat the damages the hurricane was inflicting on southeast Texas. The response was nothing short of a miracle.

Recovery efforts from Hurricane Harvey will be massive.
We must come together to help rebuild our communities.https://t.co/SR6DmnNbyM pic.twitter.com/iiMsG2i4dl

In the first two hours, the Houston Texans star’s initial goal of $200K dollars in recovery efforts was met, so he decided to expand the goal to $500K. After four days, that total rose to $8.5 million after a $1 million donation by Ellen DeGeneres. By September 6, Hurricane Harvey relief funds reached $27 million.

The largest crowdsourced fundraiser was just over halfway to its final total.

In 2018, the Justin J. Watt foundation released its first update on the record-breaking $41.6 million raised to help rebuild Houston and the surrounding areas.

Portions of the $41.6 million were distributed to eight nonprofit organizations: All Hands and Hearts, Americares, Boys & Girls Clubs, Baker Ripley, Feeding America, Habitat for Humanity, Save the Children and SBP.

As of 2018, the Hurricane Harvey Relief Fund was used in various relief efforts including:

? The cleanup, repair and rebuilding of over 600 homes.

? The recovery and rebuilding of over 420 childcare centers and after-school programs, serving over 16,000 children.

? Physical and mental health services to over 6,500 individuals.

? Distribution of medicine to over 10,000 patients.

The four-time All-Pro defensive end reflected on the efforts of the thousands of first responders, everyday citizens, and millions more who donated to help rebuild the city he calls home:

?As I reflect on the events of Hurricane Harvey one year ago, the memories of destruction and devastation remain, but they are accompanied by memories of hope, selflessness and the beauty of the human spirit. The actions of professional first responders and everyday citizens alike were an inspiration to the world and a shining example of the inherent good that lies within us all. Those actions locally were then supported by the actions of hundreds of thousands from around the world showing their support and donating their money in order to help out in any way they could.

“I was fortunate enough to witness that generosity first hand, as the fundraiser that I started with a simple goal of $200,000 turned into an unbelievable outpouring of support from people all around the globe. When it was all said and done, after the late donations and checks that came in after the deadline were counted, the total amount that was donated and is now hard at work in the community was $41.6 million.

“In the past year, those funds have been used to repair and rebuild houses, allowing people to finally return and once again have a place to call ?home?. Those funds have restored and rebuilt childcare centers so that parents can once again have a place to take their children where they know they will be safe, so that they can return to work and resume a sense of normalcy. Those funds have provided millions and millions of meals to people who weren?t sure where their next meal might be coming from after being devastated by the storm. And those funds provided physical and mental health care to those who suffered from the events of that awful weekend one year ago. While a great deal has been accomplished in the past 12 months, there is still much work to be done.

“Moving forward, there will be more of the same, as we continue to work with our incredible nonprofit partners to provide as much help and support as we possibly can for those affected by Harvey. I cannot thank everyone enough for your support and generosity. You have truly provided an unbelievable example of what the human spirit is capable of accomplishing. Every time that I am fortunate enough to witness someone step back into their home for the first time or a child run around on the playground again, I am reminded of the generosity of strangers that helped make it all possible. Thank you and never stop spreading the positivity! #HoustonStrong?

This is one of the most incredible moments of pride and unity around a common cause in my lifetime. What the people of Houston endured, and how the country responded to the massive recovery effort, is nothing short of a miracle.

There was still work to be done, but the positivity and sense of community being built in Houston can only lead to the city coming back better than it was before.

UPDATE: At the two-year mark, J.J. Watt again updated how his record-breaking fundraiser has helped rebuild Texas and the Houston area via Twitter.

Watt’s highlights are the same, but you can compare the incredible increase in the number of people helped by the J.J. Watt Foundation in just one-year’s time compared to last year.

? The cleanup, repair and rebuilding of over 1,183 homes.

? The recovery and rebuilding of over 971 childcare centers and after-school programs, serving over 108,731 children.

? Physical and mental health services to over 8,900 individuals.

This charitable effort is one of the greatest movements of our lifetime. While many will never fully recover what was lost during Hurricane Harvey, there are heroes like J.J. Watt and his foundation doing anything they can to restore Texas and restore the Lone Star State to make it even better than before.

This article was originally published August 27, 2018.