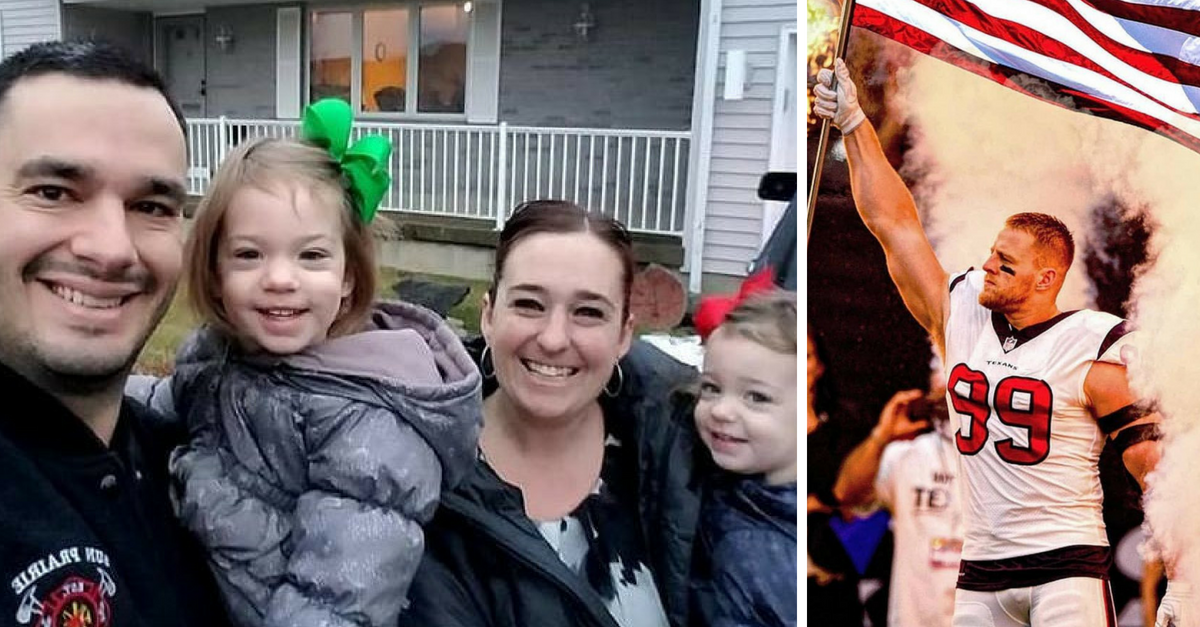 A gas main explosion in Sun Prairie, Wisconsin devastated the Madison suburb on Tuesday night. Firefighter Cory Barr was killed in the explosion, which injured 15 people; Barr was the only fatality. He was 34.

In addition to destroying several buildings in the surrounding area, The Barr House tavern, owned by Cory and Abby Barr, his wife, was completely destroyed in the blast.

When tragedy strikes, it takes a lot of heart, and even more courage, to reach out and ask for help. Sometimes, all it takes is one single person to help take that first, small step in the right direction.

Houston Texans defensive end J.J. Watt proved, once again, that he is one of the most charitable athletes in the world today. Watt donated $10,000 to a GoFundMe page created by the Bethlehem Lutheran Church in Sun Prairie, which is just one hour from where Watt grew up.

@JJWatt please do what you can for Cory Barr's family. He was very well known, liked & appreciated in the Sun Prairie community. He was brave and a true hero! Any & all support from one fellow fire fighter family to another! #RIPCaptCoryBarr #firefamily https://t.co/oEE9aCNPqW

You can donate to the victims of the Sun Prairie explosion by clicking here.

The football star did not make a public spectacle, nor has he commented on the donation. Watt is genuinely in the business of helping people. He doesn’t want added fame or notoriety for his actions; he wants to improve people’s lives.

Watt, the son of a firefighter and University of Wisconsin alum, is no stranger to fundraising and charitable donations. His foundation set out to originally raise $200,000 of relief for the people of Houston after Hurricane Harvey devastated the Texas city and surrounding area. The massive recovery effort needed all the help it could get.

The Justin J. Watt Foundation, a non-profit organization, donates uniforms, sporting equipment to children’s programs all across the country. Since 2011, the foundation has donated over $4 million worth of equipment for after-school programs.

In 2016, Watt donated $10,000 to the family of a high school football player who was injured, and in a coma, following a head injury playing in a playoff game. Attached to the message, Watt said, “”If there’s anything that I can do to help, please let me know. Sending my best wishes to Grant and the entire Milton family.”

I am incredibly honored and humbled to be included on the Time 100 list of most influential people in the world. I am only able to be an influence for others because I have been fortunate enough to have some incredible people influence me. From my family and friends, to my teammates and coaches, to the incredible fans in Houston and around the world. I have been motivated and inspired by you every step of the way and I cannot thank you enough for continuing to remind me that there is no dream too big as long as you are willing to put in the work and make the sacrifices. Most importantly, this last year has shown me that the power of positivity is alive and well. When Harvey hit and people saw the devastation that it brought, friends and strangers alike stepped up to the plate from all parts of the word to help their fellow human in need. We still have a long ways to go and our work is far from over, but the more that we can continue to shine a light on the positivity and the willingness to help others, the better off this world is going to be.

NFL star J.J. Watt is one of the feel-good stories of our generation. He is one of the best players in one of the world’s biggest sporting leagues, and his mission is give back what he’s earned.

We can all take a lesson from someone who has done more than his share to help the people who cheer his name on Sundays.