J.J. Watt is ‘100 Percent’ and Ready to Deliver Houston a Super Bowl 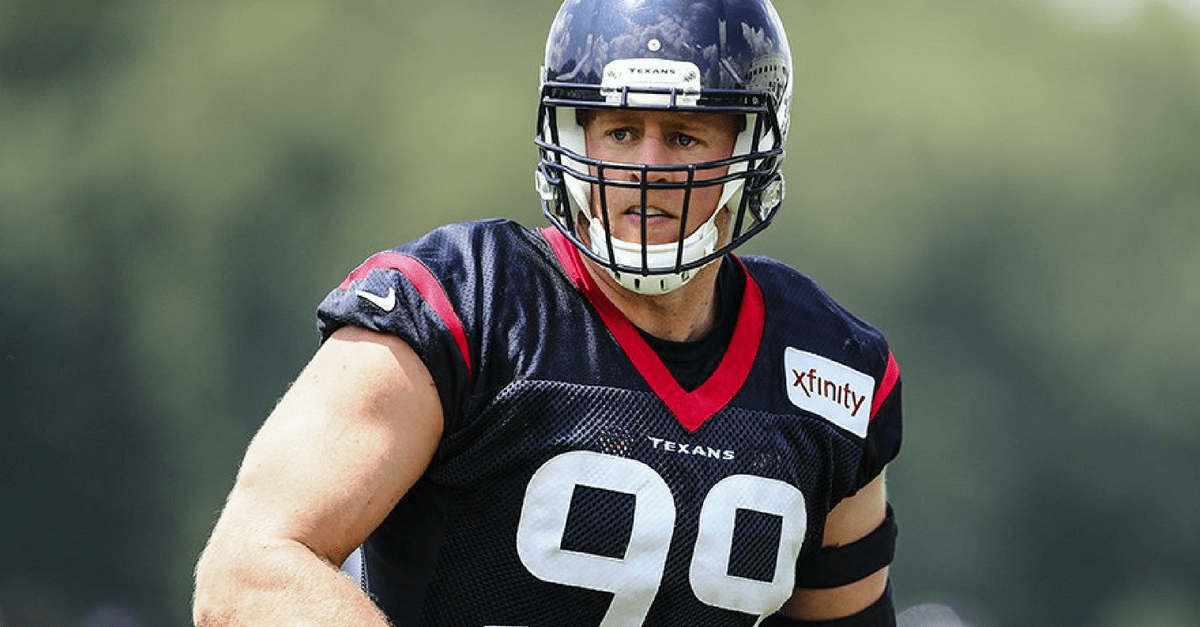 Houston Texans defensive end J.J. Watt has only managed to play in eight games over the last two seasons. From a back injury to a broken leg, the three-time NFL Defensive Player of the Year enters the 2018 season fielding questions about his health and his status ahead of camp.

After day one of training camp, the Houston Texans ‘OTA-style’ first practice revealed a few things: nothing is set in stone, DeShaun Watson is back with no restrictions, and J.J. Watt is healthy, and the unofficial mayor of the city of Houston.

“When I started this rehab process, the one thing I wanted to do was earn a clean slate; I wanted to earn a fresh start,” Watt said after the Texans opened training camp. “I think that clean slate has come, and I got chance to, once again, try to write my own story.”

one day at a time.

A four-time Pro Bowl selection, J.J. Watt comes into this season with a full offseason of rest after last year ended in week five on Sunday Night Football against the Kansas City Chiefs, when he suffered a tibial plateau fracture in his left leg.

Watt, who went to four straight Pro Bowls and earned four straight First-Team All-Pro selections from 2012-15, knows how important the mental aspect, as well as the physical, was to his return to football.

“I learned how important it is to have good people around you.”

Watt is no stranger to charitable work and helping out someone in need. His foundation raised $37 million to rebuild Houston after Hurricane Harvey devastated the area. He’s also helped families in need, including a Madison, Wisconsin family who lost their business and the family’s father in a gas main explosion.

Watt was named the NFL’s Walter Payton Man of the Year in 2017.

“The beauty of the city of Houston is everybody,” Watt said. “I mean, you got guys like Mattress Mack out there, who’s doing stuff every single day. You’ve got the [Astros] and the Rockets, everybody out there chipping in — the fire department, the police department. It’s been really special, especially these last couple years with some of the hardships we’ve been through to see everybody come together.

“And that’s the beauty of the human spirit, and that’s what gives you hope about our future.”

With training camp underway at the Houston Methodist Training Center, both Watt and second-year quarterback DeShaun Watson practiced and are ready to go when the Texans are in full pads starting Saturday.

Head coach Bill O’Brien said of Watt, “?He?s a three-time Defensive Player of the Year. Great leader on this team. Any time he?s out there, it?s great for the Houston Texans. No doubt.”

The AFC South is up for grabs, and with players like Jadeveon Clowney and DeAndre Hopkins in their prime, the Texans are set up to make a run this year in the AFC.

Aside from a conditioning test and getting the body back into football shape for a long NFL regular season, it sure looks as if J.J. Watt will be ready to return to his All-Pro form of a few years ago.

Expect the defensive end’s 76.0 career sacks to keep climbing the all-time leaderboard when 99 takes the field in September at NRG Stadium.