College Station inches closer to chasing Jimbo Fisher out of Aggieland with each passing Saturday.

Before Texas A&M fans break out their pitchforks, let's take a chill pill. The possibility of missing a bowl game isn't dire enough to warrant his massive buyout. Sure, it's disappointing, given the high expectations the Aggies had going into the season, but it's not worth $86 million.

Restructuring contracts has become a trend in college football lately. Michigan figured out a new deal with Jim Harbaugh before he took the Wolverines to the College Football Playoff last year. Nebraska worked out a new agreement for Scott Frost last season -- a move that resulted in a dumpster fire if we're putting it lightly. As for Texas A&M, they backed themselves into the corner by fully guaranteeing Fisher's 10-year, $95 million contract extension he inked in September 2021. Oops.

Fisher still has his 2022 recruiting class -- the highest-rated class of all time, according to 247Sports -- going for him. I know, I know. Signing top-rated recruits is one thing. Developing them is another. Fisher's 2020 and 2021 classes were ranked in the top eight but haven't performed to the level of Alabama, Georgia, Ohio State, or Clemson on the field. However, the 2022 class is more talented than either. Wide receiver Evan Stewart and defensive lineman Shemar Stewart are making an impact. Still, a majority of the freshmen haven't seen significant action.

That's the way things go most of the time, but after this past Saturday's game against Ole Miss, you have to ask yourself why true freshman quarterback Conner Weigman wasn't given the keys to the offense from the get-go.

Conner Weigman Should've Been the Starter From Day One 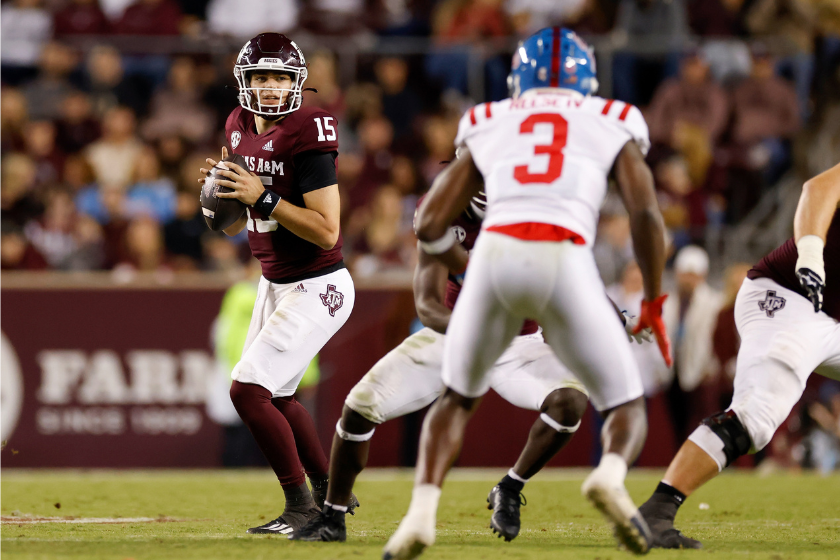 Texas A&M ranked last in the SEC in points and 13th in total offense going into the Ole Miss matchup. Max Johnson and Haynes King handled quarterback duties during this seven-game stretch. But, Fisher needed to put them in a better position to succeed. His offensive scheme needs to be updated, faster and more adaptable. The loss to Appalachian State is the prime example of his offensive shortcomings. He didn't adjust to Haynes King's struggles or even throw in Johnson to light a spark. No, he kept it rolling, and App State won the possession battle by nearly 23 minutes.

But with Johnson and King out with injuries, the next man on the depth chart was Weigman -- the hyped five-star recruit from Cypress, Texas. On the first possession of his first start, Weigman led the Aggies on an eight-play drive capped by a three-yard touchdown pass to Stewart. On the next possession, he piloted a six-play scoring drive that was finished by a 15-yard pass to Stewart.

Weigman was the guy the offense was missing. He finished the night with 338 yards through the air, and four touchdown passes -- albeit a 31-28 loss -- but the 28 points were the most scored all season and the first time the Aggies have put up more than 24. These are the kind of decisions that have Aggie fans justifying Fisher's absurd buyout. Johnson had experience as a transfer from LSU, and King won the last two quarterback battles in fall camp. Still, understanding Weigman was the best option all along didn't take more than one possession.

When Fisher was asked why he didn't start Weigman earlier this season, he responded with, "You can ruin a guy quicker than you can make a guy." That signals he didn't think Weigman was ready. It is hard to believe the freshman quarterback was performing that much worse than Johnson and King in practice.

I praised Dabo Swinney's decision to bench DJ Uiagalelei in favor of freshman Cade Klubnik in a crucial spot against Syracuse. The move was about putting his team in the best position to win by giving his offense a different look. The result was a 27-21 comeback win. Fisher should've done the same with Weigman against Appalachian State and the multiple times the offense couldn't find a rhythm early in the season.

Paying an $86 million buyout is ridiculous, but Fisher not starting Weigman earlier is another black mark on his Texas A&M resume. Next season, his seat will undoubtedly be hot. Ironically, the future of his job will rest in the hands of the quarterback who deserved to start the moment he stepped on campus.