Let's not beat around the bush: College football coaches are insane. It comes with the territory, because you have to be a little bit off your kilter to manage a hundred 18- to 22-year-olds, ignore your family for days on end and carry the happiness of your team's fanbase on your back.

Clemson head coach Dabo Swinney is insane. I mean, how many other coaches sprint out of their tunnel like it's April 16 and they're running from the IRS? But Dabo is insane in a good way.

He doesn't wait around for things to magically change if they aren't working. He's willing to take risks to give his team the best chance to win -- such as replacing his starting quarterback with a true freshman at a crucial juncture against Syracuse.

Dabo Replacing Uiagalelei with Klubnik Was the Difference vs. Syracuse 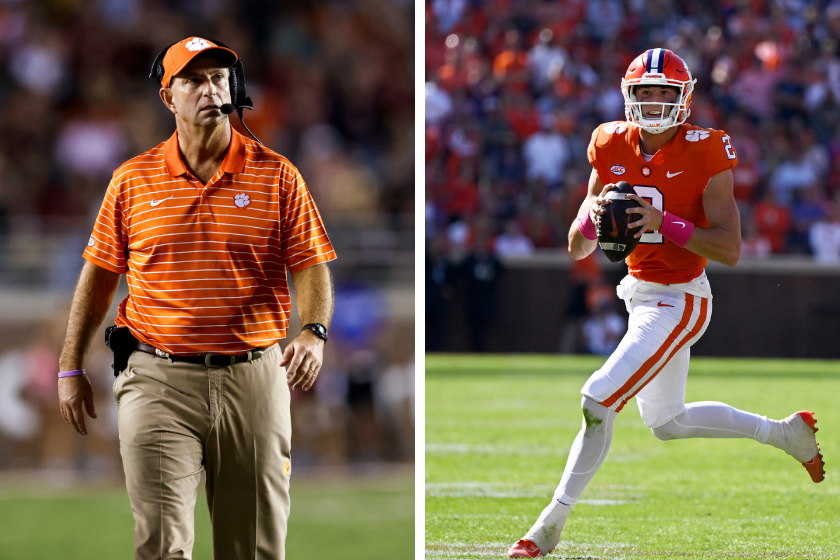 DJ Uiagalelei was off. He threw two interceptions and had a fumble that was scooped and scored on to put Clemson in a 21-10 hole with under five minutes remaining in the third quarter. Swinney had a choice to make: Stick with his struggling junior quarterback or sub in true freshman Cade Klubnik to see if he could bring a spark.

Now, Klubnik is the future of Clemson football. The five-star recruit out of Westlake High School in Austin, Texas, was the second-ranked quarterback in the class of 2022. But going into Saturday's top 15 matchup, he had only seen action in garbage time. Swinney couldn't have cared less.

He called Klubnik's number when the Orange had all the momentum, and he led a 15-play touchdown drive to bring the score to 21-16. The next time Clemson had the ball, Klubnik orchestrated a two-play scoring drive capped by a 50-yard run by running back Will Shipley. And the next drive? A field goal that left the Tigers with a 27-21 victory.

Don't get me wrong -- Klubnik didn't light up Syracuse's defense or anything. He mostly used his legs, as his arm and mind are still adjusting to the speed of the college game. But who cares? A win is a win.

Dabo deserves a lot of credit here. He had the presence of mind to recognize Uiagalelei wasn't getting the job done and that to continue rolling with him decreased his team's chances of winning. Klubnik was brought in to offer a different look, and look what happened: three drives, 17 points and a win.

The key is that Klubnik gave Clemson a better chance to win in that moment. There's no quarterback controversy -- Swinney has already confirmed that Uiagalelei is the starter going forward. That doesn't mean he's exempt from not performing. He's as accountable as anyone.

If it isn't obvious by now, I love this move by Dabo. It shows the team that no one is above getting benched. It further instills the "next man up" mentality, where your number could get called at any time. It shows he has confidence in all his guys. That's what you want to see in a coach.

If this sounds familiar, it's because another great coach by the name of Nick Saban made a similar move in the freaking national championship game in 2018. He benched starter Jalen Hurts at halftime in favor of freshman Tua Tagovailoa, who barely had any game experience. The result? A 26-23 comeback win over SEC rival Georgia and Saban's sixth national title.

MORE: Mediocrity in the Big Ten West is Hurting the Conference