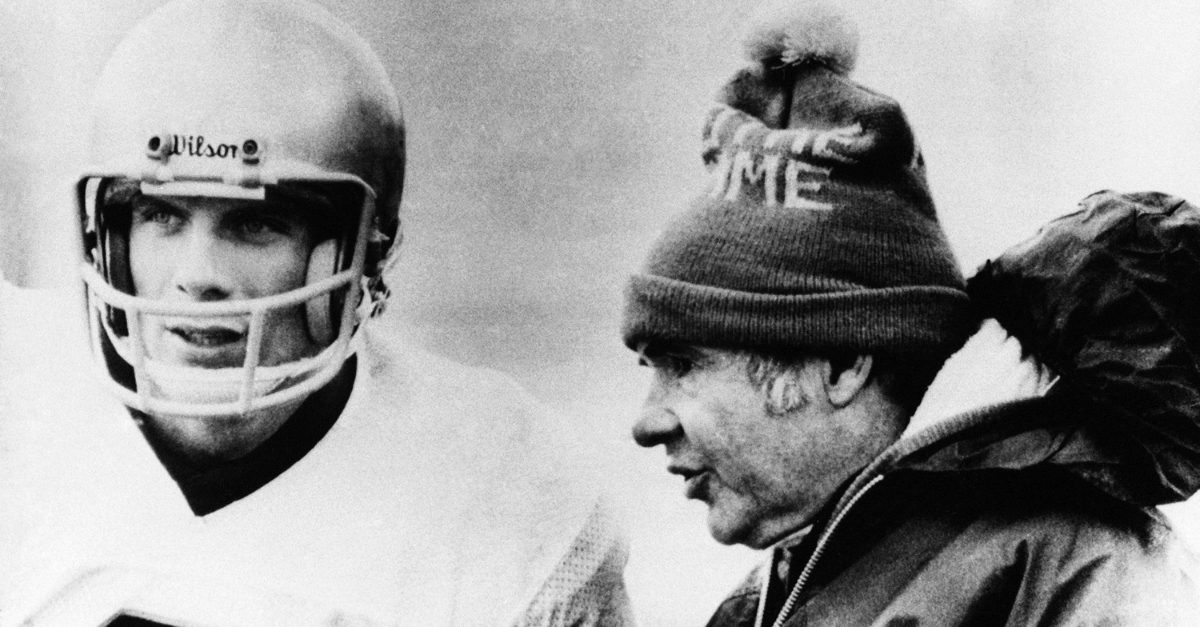 As one of the best quarterbacks in the history of the sport, Joe Montana had countless great moments in his Pro Football Hall of Fame career, but the one that truly proved he was a legend is the famous “Chicken Soup Game” in Dallas, Texas.

In his last game at the University of Notre Dame, Montana fought off hypothermia in their bowl game against the Houston Cougars, but led the Fighting Irish to a miraculous 35-34 comeback with the help of a bowl of chicken soup at halftime.

4️⃣0️⃣ years ago at the @CottonBowlGame, @NDFootball QB Joe Montana suffered from hypothermia before a miracle comeback.

Saturday, the Irish head to the Cotton Bowl once more when they battle Clemson. Look back at the legendary Chicken Soup Game.#GoIrish pic.twitter.com/9HX1un8syT

The year after winning the national championship, and seeking to repeat, Notre Dame football had lost their first two games of the season — both at home in South Bend — and the regular-season finale to USC. However, in an attempt to send their great quarterback out on a high note, it took a touchdown pass in the closing moments to seal the victory.

Not only was the 1979 Cotton Bowl played after the worst ice storm in Dallas in 30 years, but the temperatures also stayed low while the wind whipped inside the stadium. On top of that, the Notre Dame Fighting Irish were led by a quarterback who was also fighting a cold.

Quarterback Joe Montana was already in rough shape before the game. He played the first half of the game and struggled due to the conditions as well as his health. This led to the Irish falling behind by 22 points going into the fourth quarter.

This isn’t a story of Montana dominating a game and leading his team to victory without a doubt. It is one of Montana just finding a way to win the game at the end, earning his name as “The Comeback Kid.”

Joe Montana did anything but dominate this game. He completed just seven of his first 27 pass attempts, threw four interceptions and lost two fumbles. It wasn’t until halftime that everyone figured out what was going on. In the locker room, Montana was wrapped up and fed chicken bouillon to bring up his body temperature.

Head coach Dan Devine brought out Tim Koegel to begin the second half at quarterback with Montana still in the locker room. It wasn’t until later into the third quarter that he finally emerged with Notre Dame trailing 34-12.

With 7 minutes, 25 seconds left in the fourth quarter. the Fighting Irish finally put more points on the board, and it was seen as just making the score more respectable at that point. Then, Steve Cichy returned a blocked punt for a touchdown and Montana threw for a two-point conversion to Vagas Ferguson.

With 4:15 left, Montana finished an 82-second scoring drive that went 61 yards with a two-yard touchdown run. But with less than two minutes remaining in the game, and the Irish threatening at the Houston 20-yard line, Montana fumbled the ball for the second time in the game.

Tell me this Joe Montana signed helmet with a diagram of winning play in "Chicken Soup" game for Notre Dame isn't awesome?

Love stuff like that. A listener named Alex owns https://t.co/wB7lmmbx5D & has all kinds of cool stuff like this. pic.twitter.com/KZgN0V63pq

However, the game wasn’t over.

The Notre Dame defense forced another punt from the Cougars and began their final drive at the Houston-44 with just 35 seconds left. It took Montana and the Irish just four plays to score a touchdown and tie the game, with Montana finding Kris Haines in the end zone in the final seconds. But making the extra point was no guarantee in the cold weather and strong winds.

Kicker Joe Unis, who hadn’t kicked the ball since the first quarter and froze on the sideline, came into the game and had a chance to win the game. He knocked the ball through the up-rights, but a penalty forced him to do it again from farther away.

He nailed it a second time, giving his team the 35-34 comeback win and cementing Joe Montana as a college football legend and jumpstarted his historic NFL career with the San Francisco 49ers and Kansas City Chiefs.