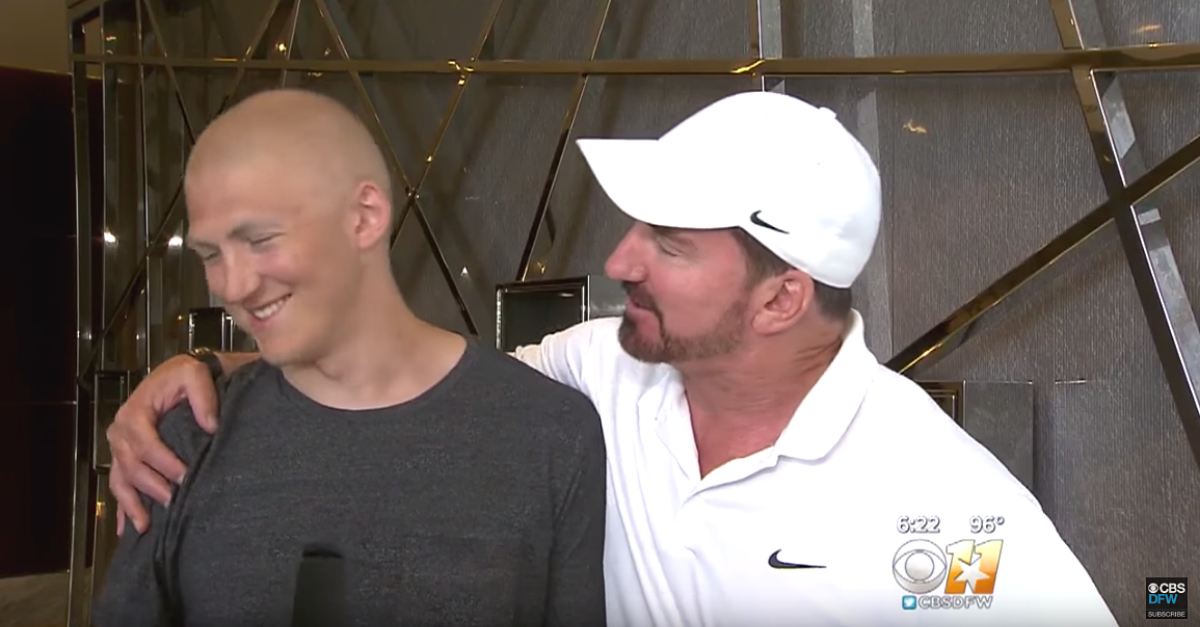 After starring at tight end for Argyle High School in Texas, Luke Laufenberg joined the Texas A&M Aggies as a walk-on in 2016. The next year, the big 6-foot-4 kid with a heart three-times that size transferred and played at Mesa Community College in Arizona. After catching 10 passes his first season, Laufenberg received life-changing news.

Laufenberg was diagnosed with Burkitt’s Lymphoma, a rare form of leukemia, the day after Christmas in December 2017. In May 2018, he was deemed cancer-free and later transferred to play college football at the University of Texas at El Paso on a full scholarship. Unfortunately, Laufenberg’s cancer returned in April of this year. In July, the Laufenberg family was told their youngest son was terminal.

Luke Laufenberg died after a nearly two-year battle with cancer on August 22, 2019. He was 21 years old.

Luke is the son of former Dallas Cowboys quarterback and the Cowboys’ current radio announcer Babe Laufenberg. He announced that Luke had passed on Thursday morning via Twitter, as well as releasing a statement on behalf of the family.

“He handled the news with a strength of character and sweet demeanor that will always inspire his family, friends, coaches, doctors and the treatment staff at Children’s Medical Center Dallas.”

Today we lost a son, a brother, a friend, and a warrior. Have never seen a person battle like Luke Laufenberg, but he lost his fight with cancer. He was truly inspirational. The hole in our hearts will never be filled. You are my hero. RIP my sweet Luke. See you on the other side pic.twitter.com/HF1xfw19Xi

This tragedy shook communities all over the Lone Star State as a beloved Texan was taken too soon.

However, all you need to know about Luke Laufenberg is simply listen to how Dallas Cowboys head coach Jason Garrett remembered this young man. Choked up and visibly upset, Garrett only had this to say during his Thursday press conference:

“Luke was an amazing young man. You guys have heard me talk about ‘The Fight’ a lot. I don’t know that I’ve ever seen a better example of that in my life. What he’s gone through the last couple of years, the spirit that he had every day. To battle through it, to always be thoughtful about the people in life. ‘How’s my mom doing? How’s my dad doing? How’s my brother doing?’ Amazing.

“You’d walk into the room and he’d just light up, whatever was going on. He had this way, this strength, unlike I’ve ever seen in my life. It’s such a tragedy. It’s so hard to understand. But I know I will, and anybody that ever knew him, will be forever inspired by the live that he lived.”

Luke Laufenberg faced his cancer with a full heart and never wavered. His life and spirit is one we should all take a moment to respect and remember.

The UTEP Miners football team is sure to honor their teammate his FCS season when they open against Houston Baptist at home on August 31.