We think of LSU as the wide receiver factory of college football, and they certainly have produced their fair share of stars like Odell Beckham Jr., Justin Jefferson and Ja'Marr Chase. However, with Jackson Smith-Njiba and Marvin Harrison Jr. set to be CJ Stroud's primary targets in 2022, Ohio State has firmly established itself as Wide Receiver U. 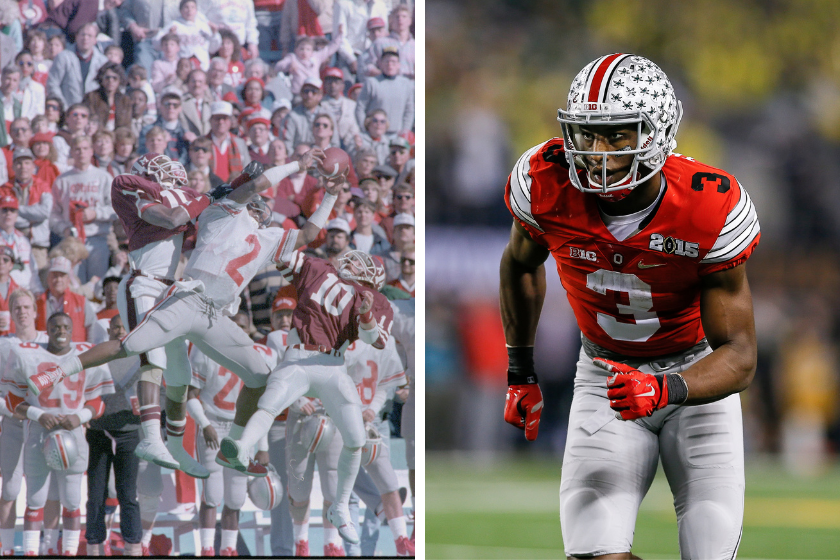 Ohio State has had plenty of recent success churning out wideouts, but its illustrious pool of talent is headlined by none other than Cris Carter. Carter finished his three-year college career with 2,725 yards, ranking him fourth in OSU's all-time record books, and 27 touchdowns. Had he played a fourth season, he would've certainly been at the top, but he wanted to get busy in the NFL. Carter, of course, had a Hall of Fame career with the Philadelphia Eagles, Minnesota Vikings and Miami Dolphins. His 13,899 career reception yards rank 13th all-time in NFL history.

Here are the other notable receivers who played in Columbus aside from Carter: fellow Hall of Famers Dante Lavelli and Paul Warfield, Santonio Holmes, Joey Galloway, David Boston, Michael Jenkins and Ted Ginn Jr. That's some great receiving talent, but Ohio State has particularly stepped up its game as of late.

Michael Thomas, Terry McLaurin, Parris Campbell and Curtis Samuel have all found success at the pro level. Thomas was unstoppable in 2019 and McLaurin earned himself a three-year, $71 million with the Washington Commanders this offseason. Again, great players, and two guys with sky-high ceilings in Chris Olave and Garrett Wilson are set to make their marks as rookies this year.

Olave finished his Buckeye career fifth in all-time receiving yards and first in receiving touchdowns. The New Orleans Saints selected him with the No. 11 overall pick in the 2022 NFL Draft. As for Wilson, he had 70 catches for 1,072 yards in 2021 and finished 10th all-time on OSU's career receiving list. The New York Jets took him one spot ahead of Olave. Both were first-team All-Big Ten selections.

Olave and Wilson were unquestionably the best receiving duo in college football last year. The Buckeyes will hold the same distinction this year with Jaxon Smith-Njigba and Marvin Harrison Jr. 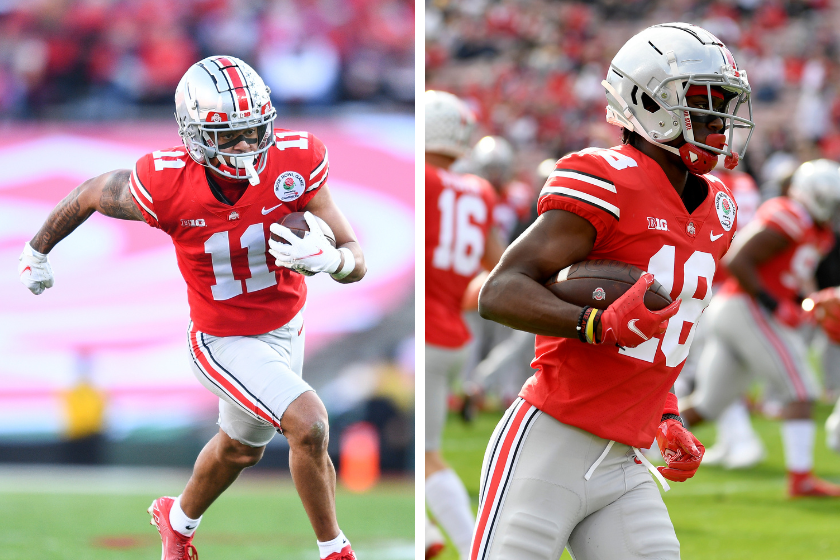 Ahead of last year's Rose Bowl matchup against Utah, Olave and Wilson announced they would be sitting out to preserve their draft stock. As a result, Smith-Njigba had a chance to prove himself as WR1. Boy, he most certainly did. The then sophomore put on one of the greatest receiving performances in college football history, catching 15 passes for 347 yards and three touchdowns in a 48-45 win. Smith-Njigba enters the 2022 season as the best receiver in the nation according to several preseason outlets.

If the 2022 Rose Bowl was Smith-Njigba's coming out party, it was also a preview of what Marvin Harrison Jr is capable of. Harrison caught six passes for 71 yards and three touchdowns in Pasadena, showing quarterback CJ Stroud life could be just as sweet without Olave and Wilson. Harrison is the son of Indianapolis Colts legend and Hall of Famer Marvin Harrison, and based on what we saw in the Rose Bowl and the rumblings we've heard this offseason, he could very well be college football's second best receiver.

"There has been a ridiculous run of wideout talent in Columbus the past decade, and Harrison, the son of Colts great Marvin Harrison, is probably the Freakiest athlete of the entire group. Harrison is a big dude at 6-3 1/2, 206 pounds. He benched 380 pounds this offseason, doing 22 reps at 225. He clocked a blistering 3.94 pro shuttle time and did 10-9 on the broad jump. He also topped out at 23 mph on the GPS. As a freshman in 2021, he caught 11 passes for 139 yards and three touchdowns but finished with a flourish, catching six passes, including three touchdowns, in the Rose Bowl win over Utah."

So Harrison has the DNA, he has the size, he has the athleticism, he has the talent. Not a bad combination. Add in the fact he's lining up opposite of Smith-Njigba, he'll be catching passes from Stroud -- the Heisman favorite -- and stud TreVeyon Henderson will be lining up in the backfield and the Buckeyes have the most fearsome offense in the country.

Like their direct predecessors Olave and Wilson, Smith-Njigba and Harrison should be hearing their names near the beginning of the NFL Draft in due time. First, they have to help the Buckeyes compete for a national championship.