Bob Marley’s Son Played Linebacker Next to Ray Lewis. Where Is He Now? 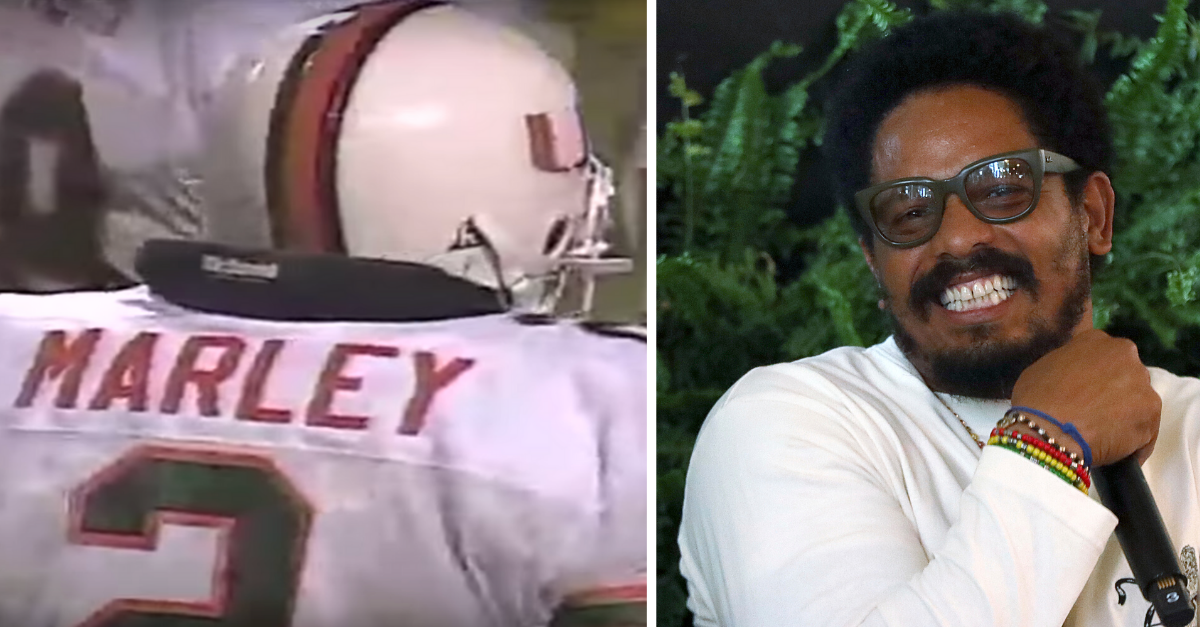 When you think of the University of Miami Hurricanes, so many things come to mind. From the dominant 2001 team to the now-famous Turnover Chain to superstar players such as Ray Lewis, Warren Sapp, and even Dwayne Johnson, there is no shortage of memories. However, there is one former player with a legendary name who flies completely under the radar: Linebacker Rohan Marley.

Marley, the son of famous reggae artist Bob Marley and Janet Hunt, was a 5-foot-8, 205-pound college football wrecking ball down near South Beach. He obviously wasn?t the biggest dude in the world, but, man, he was a ball-hawk for head coach Dennis Erickson?s football team

For four seasons, Marley, who was born in Kingston, Jamaica, made a name for himself one tackle at time and a small glimpse at his highlight reel proves how special he was on the field.

Bob Marley, the always-popular Jamaican singer and songwriter, died of Melanoma in 1981. He was just 36 years old. Rohan was just days away from his ninth birthday when his father tragically passed away, too, but he has carried the family name incredibly well ever since.

After a standout career at Miami Palmetto Senior High School, Marley chose to play college football close to home. The Hurricanes were coming off three national championships in a five-year span before he saw the field, so the pressure was on. The undersized Marley never flinched once.

Marley racked up 193 tackles in 27 games for The U, including a team-high 95 tackles during the 1993 season, according to 247Sports. He played linebacker alongside Ray Lewis for two years and helped the Hurricanes go 19-5.

RELATED: ?The Rock? Sacked a Heisman Winner During His Playing Days

Marley credits his playing style to his dad and made the most of his American football career.

?I think it?s accepting yourself and who you are. You?re there. You’re a football player. You?re playing football. Otherwise you?re going to get hurt. It?s just a mentality. Your mentality has to be present. You have to be present and be consumed with your presence in the now. It?s really understanding who am I and what am I doing. Am I being the best that I can be now? That?s what is really important?accepting your now.

?We learn to do that by really understanding yourself and growing within yourself and understanding the task at hand and what we?re trying to accomplish, which is trying to be champions and be number one. How do you get there? Well here we are. Here?s the platform. You can?t wait until January and think July and August don?t count. Every day counts. That?s really the mentality and the visionary and the later in your life that leads you into being an entrepreneur because the things you do good today you?re going to do them greater. But you have to start today. That?s the entrepreneur spirit. But you have to stay. You have to accept the now and where you are today.?

After college, Marley played professional football for the Ottawa Rough Riders in the Canadian Football League (CFL) before starting a successful business career.

His son, Nico Marley, played linebacker for the University of Tulane, and was on the practice squad for the NFL?s Washington Redskins in 2017.

Where is Rohan Marley Now?

Rohan Marley is the father of eight children. He had two children, including Nico, while in college with his girlfriend and former wife Geraldine Khawly, five kids with musician Lauryn Hill, and another with his current wife, Barbara Fialho.

In 2009, after visiting a farm in Ethiopia, Marley co-founded Marley Coffee, an organic coffee plantation and farming business in Jamaica?s Blue Mountains. It is publicly traded as Jammin Java Corp.

Although his playing days are long over and his business career has picked up, nobody should forget Rohan Marley and what he did on the gridiron.

MORE: The Strange History Behind the Miami Hurricanes Bird Mascot