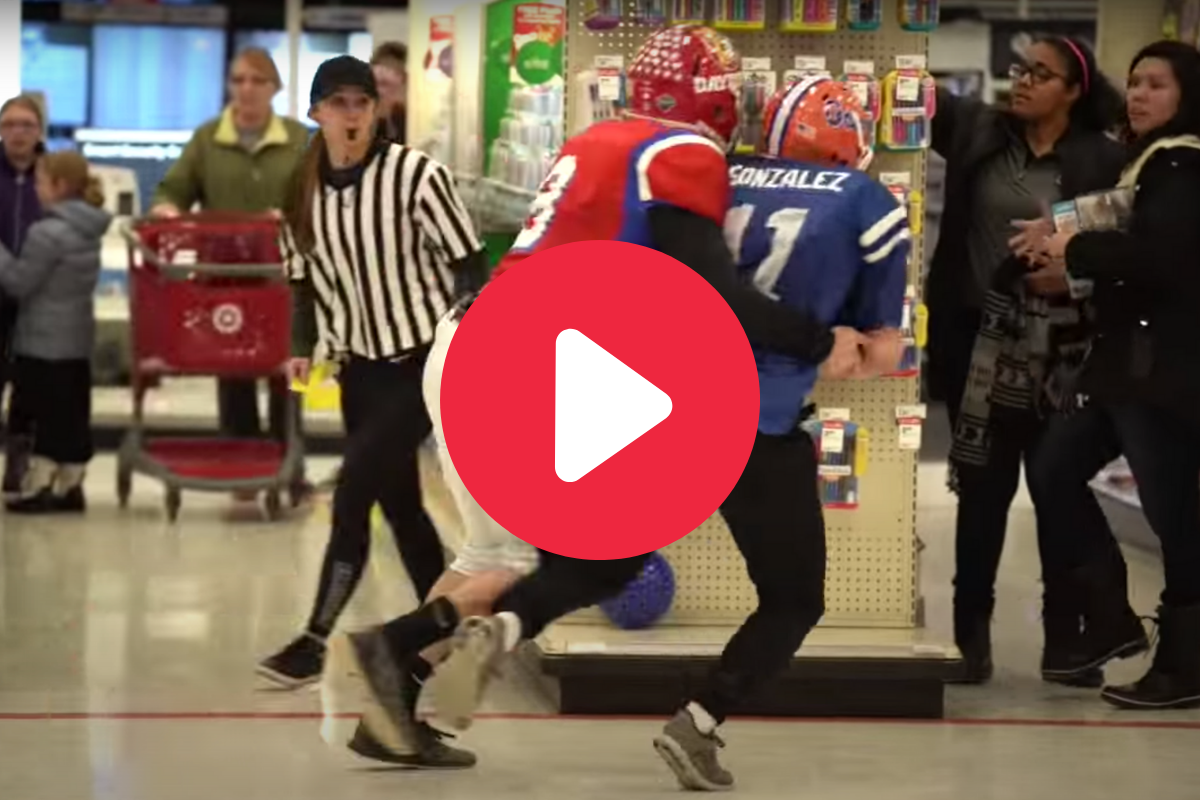 We’ve all dreamt it up in our heads. Tackling your best buddy into the shelf of Cheerios in the middle of aisle seven of the grocery store sounds like a blast. You’re lying if you’ve never picked up a football or bouncy ball at Walmart and threw it around the store like Patrick Mahomes.

I know I have. Managers will yell at you, but who really cares? Football fans are so accustomed to watching massive hits on TV from the comfort of their couches that sometimes they can’t help but carry that adrenaline over to the next stop at the store.

Ross Smith embodies exactly what I’m talking about. The notable YouTuber just couldn’t help but throw on the pads and make some mean tackles in the middle of Target.

For those of you who don’t know who Ross Smith is, he and his grandma are very famous on YouTube and on social media. Smith is actually a former college football wide receiver for the Dayton Flyers, whom he caught 118 passes for from 2012-14.

Since hangin up the cleats, he’s racked up more than 1.5 million subscribers on YouTube, which is a ton. He and his grandma have even taken part in a fun video with Urban Meyer and the Ohio State Buckeyes football team.

Smith decided to fully suit up, helmet and all, and tackle a friend in random stores and public places back in 2018. It’s pretty bonkers, and most of the people shopping have no idea what’s going on.

We get a firsthand look at a monster hit outside a Dick’s Sporting Goods in a mall while a girl is dressed in a full referee outfit.

The best clip comes inside a Target store. Smith tackles his friend to the ground by the greeting card section and is flagged for a “targeting penalty.” OK, now that’s funny. What’s next, a Hail Mary in church? Flea Flicker at the flea market?

The video features more ridiculous clips, including a massive truck stick hit in front of the deli section and a girl taking a football to the face.

I can’t believe I haven’t seen more of this. When football (and the rest of the sports world) went on pause during the coronavirus pandemic, I’m surprised people didn’t just start creating their own plays inside Walmart.