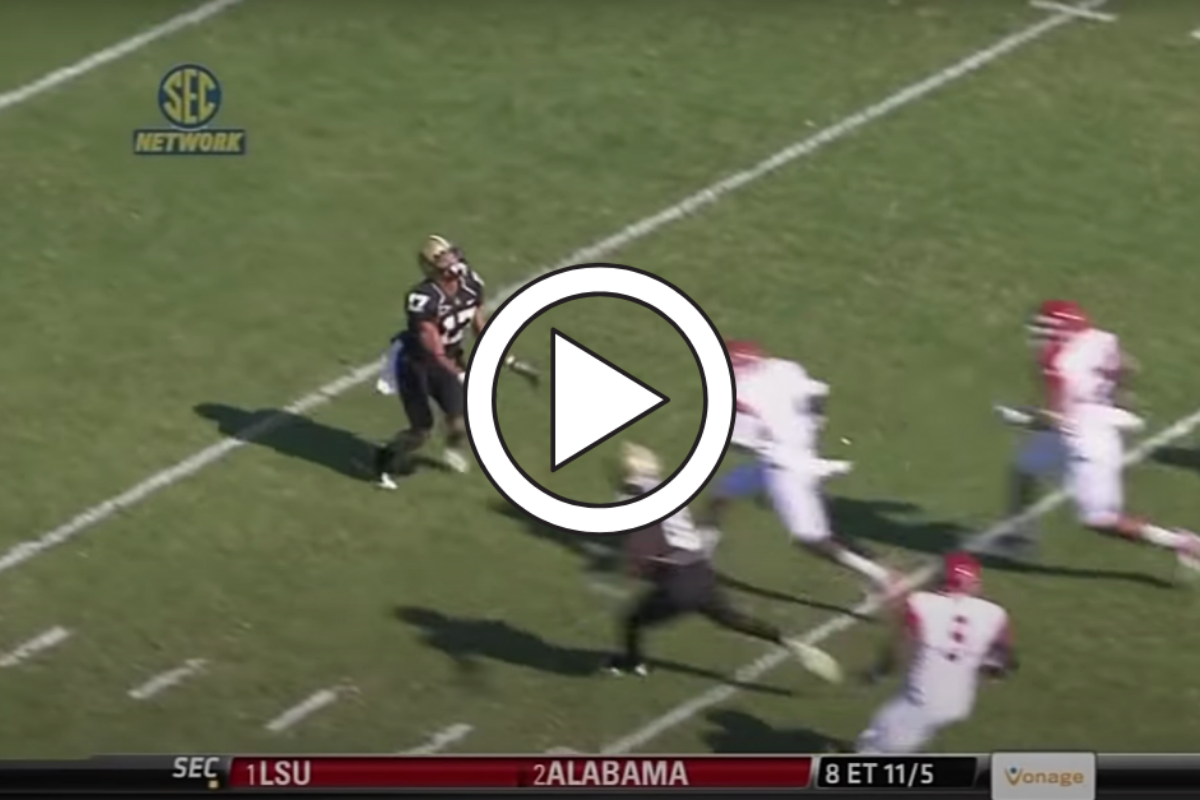 It was evident from the start that former Arkansas Razorbacks wide receiver Marquel Wade would be a problem for defenses in the Southeastern Conference. Wade arrived in Fayetteville with the Class of 2010 as a three-star prospect, according to the 247Sports Composite. As a redshirt freshman, Wade earned All-SEC honors as a kick returner for Bobby Petrino’s team that finished 11-2, won the Cotton Bowl, and was ranked No. 5 in the final AP Poll of 2011.

Despite Wade’s breakout success, there is only one play that defined his 2011 season. Nearly a decade later, that play remains the only one non-Arkansas fans will ever attribute to the special teams standout because, quite frankly, it ranks among the dirtiest cheap shots in college football history.

Arkansas was ranked No. 10 when they traveled to Nashville to take on James Franklin’s Vanderbilt Commodores. The Razorbacks had already topped Texas A&M and Auburn ? both teams were ranked when Arkansas beat them ? and their only blemish through a 6-1 start was a 24-point loss to Alabama, who won the BCS National Championship that year.

Razorback fans were squealing “Wooo, Pig Souie” as their team continued to climb, which magnified every moment; There was no room for error amidst a run of success the program hadn’t enjoyed for decades.

That’s when Marquel Wade tried making a play he should never have made, and it turned his football career upside down.

Trailing 21-17 in the third quarter, Arkansas punted away. Vanderbilt’s Jonathan Krause waived for the fair catch near his own 20-yard line, then ran upfield to camp under the football. That’s when Wade nearly took Krause’s head off with a crushing tackle. Not only had Krause already signaled for his safety, Wade also arrived half a second before the football had even come down from the Tennessee skies.

Flags flew. Wade, who popped up and celebrated what he (somehow) thought was a good football play, was quickly ejected for the illegal hit. He didn’t go quietly though, protesting on the sidelines before strength and conditioning coach Jason Veltkamp escorted him to the locker room.

Krause laid on the field for several minutes as the Vanderbilt staff examined the punt returner. Fortunately, Krause was able to return and even fielded a punt later in the game, which the Hogs came back to win, 31-28.

Everyone in the college football world crucified Wade for the cheap shot, and the SEC offices suspended him the following game versus South Carolina.

“I was just going out there doing 100 percent, trying to play my game and I messed up,” Wade said in an apology (via ESPN). “I take all the (responsibility) for everything I did.”

That wasn’t enough, though. The backlash was so severe that Wade’s mother even wrote a letter to Krause over Facebook asking for forgiveness, which the Vanderbilt player gladly accepted.

“I got an apology from him and his mom … Facebook, Twitter,” Krause said, per SBNation. “It was his mom that sent the letter (via Facebook). It was nice of her to take her time out and send the letter.”

Marquel Wade’s NCAA career didn’t get better after that.

Where Is Marquel Wade Now?

Wade’s 2011 season looked strong on paper with 556 all-purpose yards and an 85-yard kickoff return touchdown versus New Mexico. However, the offseason showed Wade was not ready for big-time football.

In May 2012, Wade was among several Arkansas football players arrested on suspicion of burglary at the University of Arkansas campus. Wade, Tyler Gilbert, Maudrecus Humprey and Andrew Peterson were kicked off the team a few months later ? Both Wade and Peterson pled guilty to one count of residential burglary and were sentenced to six months in prison at the Arkansas Department of Community Correction. They were also given 60 months of supervised probation.

Wade was arrested again in 2015 for violating that probation.

After getting his legal affairs in order, it was finally back to the field. Wade signed with the Nebraska Danger of the Indoor Football League in 2016, then joined the Jacksonville Sharks of the National Arena League in 2017. In 2018, Wade returned to the IFL and broke out with Cedar Rapids River Kings, leading the league in receptions (64) and average receiving yards per game (65.9) on his way to First-Team All-IFL honors.

Wade joined the Iowa Barnstormers in preparation for the 2020 IFL season before the coronavirus pandemic canceled the season; He re-signed with the franchise for the 2021 campaign.

While one massive hit is what college football fans will remember Marquel Wade for, it’s great to see he turned over a new leaf and continues to play the game he loves. Most importantly, he appears to be doing it the right way.